That company is one of three that now receive millions of dollars from the state Medicaid program each month to pay for the care of about 45,000 Arkansans who have significant mental illness or developmental disabilities.

Under the state law authorizing the initiative, such companies -- known as Provider-led Arkansas Share Savings Entities, or PASSEs -- are required to be at least 51% owned by participating health care providers, such as doctors, hospitals or organizations offering services for the developmentally disabled.

Filings with the state Insurance Department indicate that Mercy, which owns hospitals in Arkansas and three other states, owned no more than 26% of Arkansas Total Care as of June 30. Centene owned the remaining 74%.

Despite the insurer's large stake, the state Insurance Department considers Arkansas Total Care to meet the provider ownership requirement because Centene owns part of its share through a subsidiary, LifeShare Management Group.

The Arkansas Department of Human Services issued LifeShare a temporary certificate as a provider of services for the developmentally disabled in 2017, just over a month before Arkansas Total Care was approved to participate in the managed care program.

"The law doesn't provide for us to look at parent companies," Insurance Department spokesman Ryan James said. "If it's a provider, we count it on the provider list."

Rep. Aaron Pilkington, who sponsored the legislation, said Centene's ownership stake is "concerning" and doesn't follow his "intent that it would be 51% owned by providers."

Sen. Missy Irvin, R-Mountain View, who is chairman of the Senate Committee on Public Health, Welfare and Labor, had a similar reaction when she recently learned about Arkansas Total Care's ownership.

"This to me seems like an end-run around that legislation and that legislative intent, and that's not what I believe that the Legislature endorsed," said Irvin, who works at her husband's family medicine practice.

She and many health care providers would have opposed Pilkington's bill, which became Act 775, if the requirement of provider ownership had not been included, she said.

John Ryan, chief executive of Arkansas Total Care, said in a statement that his company "meets the requirements of a certified PASSE as established by Arkansas DHS and regulated by the Arkansas Insurance Department."

On March 1, three of the companies became responsible for paying for all the recipients' care in exchange for larger monthly payments, ranging from $998.86 to $12,672.62 per recipient.

One of the companies, Forevercare, dropped out before the larger payments started.

From March through June 30, payments to the three remaining companies totaled $540 million, including $123 million that went to Arkansas Total Care.

The initiative was designed to reduce costs by better coordinating care while generating money for the state through its 2.5% tax on insurance premiums.

It emerged in 2016 as a compromise with providers who feared that managed care would lead to cuts in benefits and reimbursement rates.

"We wanted to create a new type of organization that combined the strengths of providers rooted here in the state with partners that have expertise in operating business systems that could immediately comply with insurance laws and regulations as well as federal Medicaid requirements," Human Services Department spokeswoman Amy Webb said in an email.

"The model minimizes the incentive to deny or decrease service to our members because 51% of the ownership is by the same providers paid to provide the direct service. This forces the model to look for a better way to maintain efficiency by targeted, coordinated, care coordination to improve the overall health and care of the member, and in turn, will save money by avoiding high cost services like hospitalizations/institutions."

The proposal won the support of providers, sailing through the Legislature with little opposition.

Act 775 of 2017 requires half of the premium tax money to go toward reducing the number of people with developmental disabilities on a waiting list for home-based services, such as help with dressing and bathing.

As of August, about 4,500 people were receiving the services and 3,300 were on the waiting list.

Anthem, an Indianapolis-based health insurer, owns 49% of one of the managed care companies, Summit Community Care.

The remaining 51% of Summit is owned by the Arkansas Provider Coalition. According to materials presented by the Human Services Department to state legislators in April, the coalition includes the Little Rock-based Baptist Health system, all but one of the state's 12 community mental health centers and dozens of other providers of mental-health care and services for the developmentally disabled.

Through its pending acquisition of Boston-based Beacon Health Options, Anthem is also set to own a sixth of the other managed care company, Empower Healthcare Solutions.

The Arkansas Healthcare Alliance is made up of 22 providers of mental health and substance abuse treatment services and services for the developmentally disabled, according to the Human Services Department.

Woodruff Health Group "was created to hold the interest of ARcare," a federally funded, Augusta-based community health center with more than 40 clinics in Arkansas, Mississippi and Kentucky, according to a June 15, 2017, letter to the Insurance Department announcing Empower's intention to participate in the managed care initiative.

Statera is "an entity comprised of leaders and innovators committed to serving the long-term support services needs of Arkansans," according to Empower's website.

As of June 30, Centene owned 49% of Arkansas Total Care through a health plan subsidiary, Arkansas Health and Wellness, and an additional 25% through LifeShare, according to Insurance Department filings.

The certification was upgraded to a regular license on Feb. 1 of this year.

According to since-removed pages from its website, LifeShare was founded in New Hampshire in 1995 and acquired by Centene in 2015.

At a conference with investors that year in New York City, Centene executive Holly Benson said LifeShare had helped address the needs of the disabled by developing a "pathways model for coordinating in partnership with managed care" as well as a "rapid crisis response" program to reduce unnecessary emergency room visits, according to a transcript of the conference.

As recently as April 6, LifeShare said on its website that it "develops and delivers person-centered solutions for people with [intellectual and developmental disabilities] and others with complex needs through managed care organizations," according to version of a page from the site captured by the San Francisco-based Internet Archive.

LifeShare's website also said then that it is a "direct services IDD and child welfare provider in multiple states."

Centene's site, as recently as July 19, said LifeShare "develops and delivers person-centered solutions for people with intellectual or developmental disabilities (IDD) and others with complex needs through managed care and state and health organizations," according to an archived page.

That information had disappeared from the version of that page on Centene's website as of Friday.

In a response to written questions from the Arkansas Democrat-Gazette, including why the website was changed, Arkansas Total Care provided only Ryan's statement.

The 2017 state law defines a "participating provider" as one that "delivers healthcare services" to Medicaid recipients served or eligible to be served by one of the managed care companies.

As of last month, she said it also didn't appear that LifeShare had billed Arkansas Total Care or the other two managed care entities for any services.

She added that "providers would not have to bill immediately, and it's my understanding that PASSEs have not submitted all encounters yet, so I can't say for certain there won't be any encounters for this timeframe."

"If that's the direction the state wanted to go, they should have just done that in the first place and just had Centene or Anthem come in and operate the managed care program," he said.

He added, however, that he hadn't heard any complaints about Arkansas Total Care and was impressed by a presentation the company gave in May.

"They really seemed to really understand the person-centered approach," he said. "They were looking at how the person could live successfully in the community and not just within going to their group home or day [habilitation] program."

Stephanie Smith, chief operating officer of Easterseals Arkansas, said "all three PASSEs have figured ways to meet the spirit and intent of the provider-led requirement." Easterseals Arkansas serves the developmentally disabled and, according to the Human Services Department, has a small stake in Summit Community Care,

Of the three Provider-led Arkansas Share Savings Entities, she said, Arkansas Total Care is "the one most willing to come to the table and meet with providers and [has] really been the lead in being proactive in getting some of the initial problems solved."

Those problems included delayed payments and difficulties that providers encountered submitting claims during the rollout of the managed care initiative's second phase.

"As long as they're doing a good job making sure that the individuals with behavioral health needs and developmental disability needs are getting the services that they need, they're getting the care coordination that they need, and they're working well with providers to ensure that they're timely in prior authorizing services and making sure there's access to services -- to me that's the piece that's most important," she said. 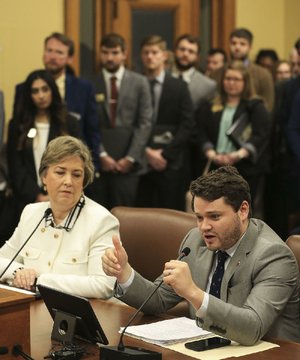 Photo by Staton Breidenthal
Rep. Aaron Pilkington (right), R-Clarksville, along with Nicki Hilliard, president of the American Pharmacists Association, speaks Thursday at the state Capitol during a meeting of the House Public Health, Welfare and Labor committee about his bill to allow pharmacists to dispense oral contraceptives. More photos online at arkansasonline.com/301genassembly/. 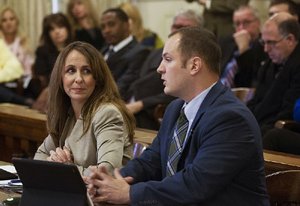 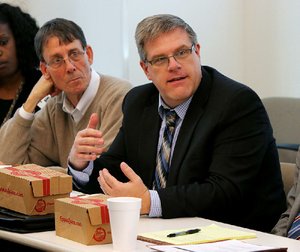 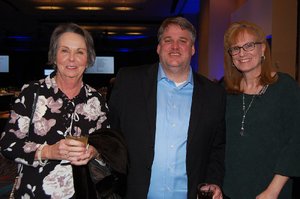