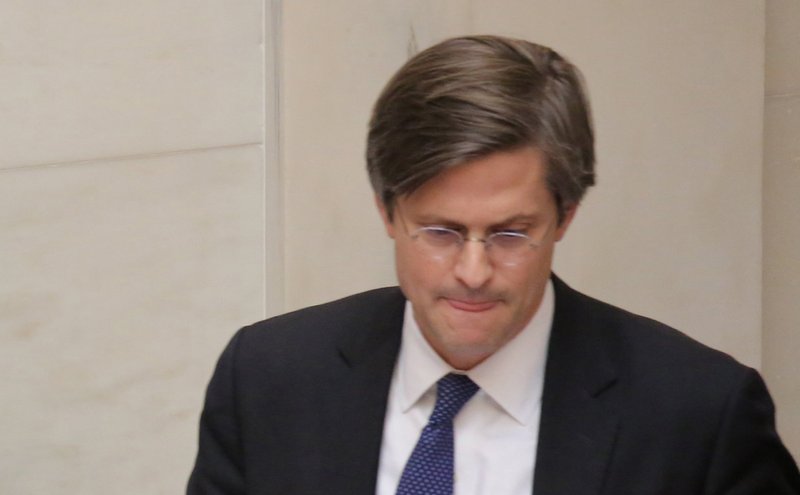 Sen. Will Bond (shown), D-Little Rock, said in July that he isn’t running for reelection. Little Rock Republican Bob Thomas announced that he will seek election next year to the seat now held by departing state Sen. Will Bond. Former state Rep. Clarke Tucker, D-Little Rock, had already announced his own bid for the Senate District 32 seat.

Thomas, 56, is a medical devices salesman and certified welder who unsuccessfully challenged U.S. Rep. Vic Snyder, D-Little Rock, in 2000. He is a brother of state Sen. Missy Irvin, R-Mountain View.

In August, former state Rep. Clarke Tucker, D-Little Rock, announced his own bid for the Senate District 32 seat, after Bond said in July that he isn't running for reelection. Tucker, 38, an attorney, served in the state House from 2015-19. He lost a challenge to U.S. Rep. French Hill, R-Little Rock, a year ago.

Thomas said Friday in an interview that although the state Senate seat typically has been held by a Democrat, "I just think someone with more of a conservative viewpoint is going to be more beneficial for the state than what we have had."

He said he has no criticism of Tucker's record at this point.

He said his top priorities if elected would include reducing the personal property tax assessment for cars, trailers and boats and increasing the quality of the schools in Little Rock.

Thomas said he supports the state Board of Education's Oct. 10 decision to end recognition of the Little Rock Education Association as the collective bargaining agent for teachers in the Little Rock School District.

Thomas said that "in principle," he also agreed with the board's Oct. 10 approval of a framework for a plan to move the district from state control to a locally elected board. Under the plan, the local board would have limited authority as defined by the state board. He said he wants to dig into the details to learn more about it.

Tucker said Friday that he wants to see the Little Rock School District returned completely to local control. He also said the state Board of Education made the wrong decision to end recognition of the Little Rock Education Association, and it was the wrong body to make that decision.

Thomas declined to state a position on the state's version of Medicaid expansion called Arkansas Works, which provides health insurance to about 250,000 low-income Arkansans.

Thomas said he wants to see what happens with appeals of a federal judge's ruling to revoke Arkansas' work requirement for some of the Medicaid expansion's participants. The Medicaid expansion work requirements in Arkansas and Kentucky were struck down by U.S. District Judge James Boasberg of Washington, D.C., in a pair of rulings on March 27 that the two states and federal government have appealed.

Tucker said he supports Medicaid expansion and worked to protect it in the House.

Asked to specify any circumstances under which he would allow for abortion, Thomas replied, "That's all you are going to get from me."

Tucker said abortion was a decision for the woman, her family and her god.

Thomas, who formed a committee on July 11 to explore running for the Senate District 32 seat, said that "he kind of put it on hold" and then closed out the exploratory committee on Thursday without raising any money.

Tucker said he always expected somebody to run and he looks forward to the race.

In August, Tucker said his primary focus in the state Senate will be on health care, education and the economy, adding there are many issues in need of attention, ranging from protecting the climate and natural resources to paying women as much as men doing the same work.

Senate District 32's eastern boundary is Interstate 30 in Little Rock. The northern edge follows the Arkansas River to the Perry County line. The southernmost edge is Interstate 630, then the district crosses over Interstate 430 to encompass an area that includes Chenal Parkway, Pinnacle Mountain and portions of Lake Maumelle.

State lawmakers make $41,393 a year in salary, while the House speaker and Senate president pro tempore make $47,277 a year in salary. In addition, they are paid per diem and mileage for attending legislative meetings.