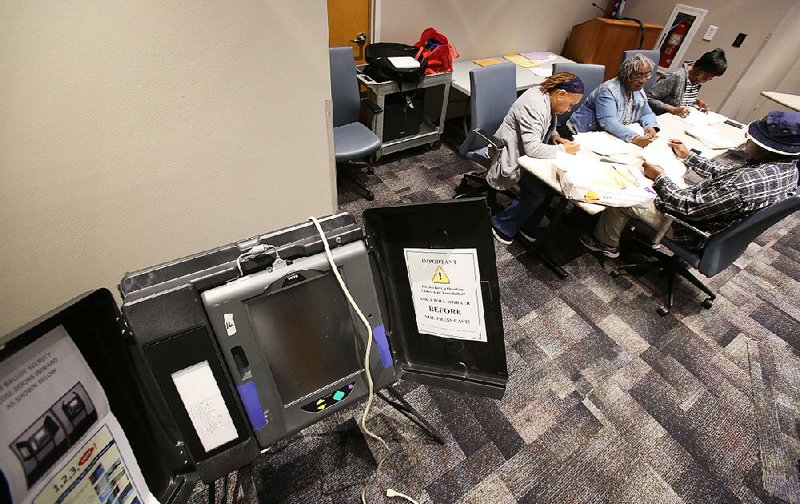 A barbecue lunch has spurred a conversation about the party affiliations of Pulaski County poll workers, with an election commissioner arguing that the roster has had too many Democrats.

The lunch topped a list of errors documented during this year's House District 36 special primary election, when a Democratic candidate took the barbecue to poll workers, also Democrats, at two early-voting sites.

Election Commission chairwoman Evelyn Gomez and elections director Bryan Poe said they don't have evidence suggesting that the candidate, Darrell Stephens, knew of the poll workers' party affiliations when he provided the lunch. (He didn't return a call seeking comment.)

Stephens didn't win, but the episode sparked talk about a potential appearance of impropriety, as well as pools of election workers that commissioners and staff members said have fallen out of balance.

"We're not going to have one party in charge," said Gomez, a Republican appointee to the three-member commission. "We want to make sure it's fair, fair representation. And that we don't get in a problem where we do have a partisan issue, where it's a single party that's controlling everything."

She specifically referred to poll workers for that election's runoff in Pulaski County. For that vote, 75 poll workers were Democrats, five were Independents, three were Republicans and one worker didn't list his affiliation.

While commissioners have taken no formal action, members at an October meeting discussed interest in more closely hewing to a statute that allows them to consider workers' party affiliations when assigning them to polling sites.

The statute does not express a requirement, but it is written to let the minority-party commissioner appoint one less worker than the majority at each polling site, for example, three Republicans, two Democrats and an Independent.

Commissioners following that guideline would bump up the number of Republicans at Pulaski County polling sites, boosting participation by workers aligned with the state's majority party in one of its most Democratic-leaning counties.

Gomez said in an interview that she was not concerned about any potential appearance of partisanship under that approach "because the goal is to be as fair and honest as possible."

Of total active poll workers in the state's most populous county, 523 of 964 are Democrats, 183 are Republicans, 240 are Independents and 18 left blank a field indicating their party affiliations.

During a discussion of poll workers' affiliations while looking over assignment lists for Tuesday's coming election, Gomez praised what she said was a "better mix" than what previous commissioners had reviewed.

"Certain parts of the county have more Republicans, certain parts have more Democrats," he said. "We can ask people if they want to work at a certain place; they may or may not say yes.

"So while we may have a sufficient number of Republicans, countywide, they may not be willing to drive to Martindale Baptist Church or Pilgrim Rest [Baptist Church]."

"But did you go ahead and ask them?" Gomez asked Camp.

Because the coming election was just a few weeks away at that time, commissioners decided to dig into the matter in a future meeting, with Gomez urging a fresh look at the "lopsided" poll worker assignments.

Poe said in a later interview that a divide in workers' political affiliations in the county has come to his attention in recent years and emerged as a concern in 2016.

Efforts to change those proportions, however, have met with "uneven results," Poe said, complicated by the fact that the law "strongly suggests" that workers should be assigned to stations in their own precincts.

"We're going to use everybody. It's just that we wish it was more balanced than it is," he said.

More attention to affiliation when appointing poll workers also would make Pulaski County a bit of an outlier among large counties in the state.

Arkansans can work at the polls without declaring any party affiliations, and many commissioners said partisan ties have little or no bearing on their selection or assignment of workers.

The uphill battle, several said, is staffing the polls in the first place.

"We are happy to get poll workers -- let alone trying to get a mix of Republican and Democrat individuals at each one of the polls."

Arkansas is among 48 states that provide instructions about the party makeup of poll workers in state statutes, according to the National Conference of State Legislatures.

Those rules are designed to provide "low-level security" during elections, said Lonna Atkeson, a University of New Mexico political scientist who directs its Center for Voting, Elections and Democracy.

"The nature of the game is competitive, and people cheat when they can," she said. "If you have both parties there, then the chance of the collusion among poll workers is much lower."

A U.S. Election Assistance Commission report shows that Arkansas is one of just a few states, including Connecticut and Maryland, to codify recommendations on party affiliation assignments by polling site, rather than precinct.

The nuts and bolts of that option in state law are familiar to election commissioners in nine larger Arkansas counties, but its execution is infrequent, many said.

"We don't find [considering affiliation] to be a necessity. ... Our main thing is getting poll workers," said Renee Oelschlaeger, the Republican-appointed chairwoman of the Washington County Election Commission.

"If you can get good poll workers -- people who are conscientious about doing their job -- in our view, [party affiliation is] pretty irrelevant."

Concerns about poll workers' party affiliations hasn't come up in the 25 years that Gene Haley, the Republican-appointed chairman of the Garland County Election Commission, has been involved with elections.

"It's really a non-issue, unless somebody complains, and so far that hasn't happened," he said.

"As much talk [as there is] in the media and anger and stuff, at some point it might come up," Haley said.

In White County, Republican-appointed election commissioner Robert Allen said the need for 220-250 workers can be difficult to meet, and his commission tends to use everybody who will volunteer.

"As long as we can find people able to stay awake for 13 hours and not on a respirator, we grab them," Jefferson County election commissioner Stu Soffer, also a Republican appointee, said in an email.

"Finding good, honest poll workers is a challenge, and we really don't care what their politics are."

He hasn't heard complaints about the makeup during his commission service but said it's a "sensitive issue. ... The two parties, they get kind of sideways with you about it if you don't [consider it]."

Gomez said hearing that other counties don't necessarily take up this practice did not make her feel differently about reviewing workers' partisan ties more intensely, saying the commission's goal is to curtail "bad actors."

A few former Pulaski County election commissioners offered mixed perspectives on the way poll workers' affiliations had been approached in the past.

Kevin Gorman, a former Republican commission appointee, said that staffing, training and other challenges related to election workers had taken precedence when he served.

He called Pulaski County the "last bastion" of the Democratic Party in the state, so "of course there are going to be more Democrats."

Bilenda Harris-Ritter, a former Republican appointee who is now on the state Board of Election Commissioners, lauded the Pulaski County commission's scrutiny, saying she "constantly heard" this as a complaint from members of her party.

"[Republicans would say] 'all the poll workers are Democrats at my poll, and they're doing things they shouldn't be doing,'" she said.

She didn't recall any instances of poll workers acting with bad intent during her service, though commissioners had to nip in the bud inappropriate behavior such as accepting gifts from candidates.

A threat posed by poll workers, Atkeson said, may have less to do with deliberate interference with elections than poor training and unconscious bias, especially in cases where workers are required to make judgment calls.

Because poll workers work just a few days a year, they're prone to mistakes, such as erroneously turning people away or asking for an ID in jurisdictions where it's not required, the professor said.

That makes it doubly important for supervisory bodies like election commissions to clarify rules and requirements, so election workers' biases related to their own political leanings doesn't creep in, she said.

"[Poll workers are] partisan. ... The fact is, they do take sides," she said. "The more you have rules and procedures that are clear, the more they are likely to follow them."

It wasn't clear how often candidates from the two major political parties have asked questions about the partisan makeup of the people who sign up to work at local polls.

Dillon Hupp, chairman of the Democratic Party of Pulaski County, said he's never been contacted by a candidate expressing concerns about the affiliation of poll workers over the past four years.

One would hope, he said, that workers' parties wouldn't matter, and he was skeptical of the approach being floated by the local commission.

"They probably ought to just be upset that there aren't more Republicans in Pulaski County," he said, noting that Democrats are "fighting an upward battle" at the state level.

"We support the efforts of the Pulaski County Election Commission to follow state election law with regards to majority party presence in polling locations," he said in a statement.

Poe, the elections director, said general efforts to expand recruiting of poll workers in the county are ongoing, and include a brochure advertising the opportunity to work during elections that is being redesigned for distribution.

Act 539 of 2019 allows people to volunteer to work at the polls, rather than earning a small wage. Commission staff members are hopeful that will boost participation by community groups in next year's elections.

"Basically [we'll] just throw a wide net and see what we can pull together," he said. 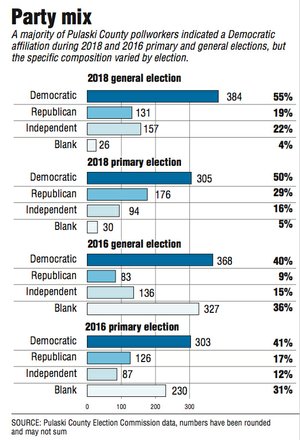