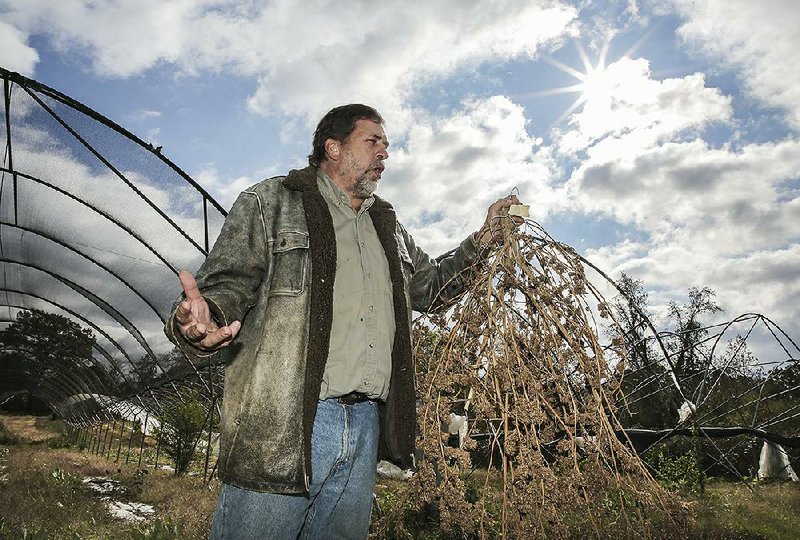 “It’s a missed opportunity,” Kelly Carney, who owns a hemp farm near Cabot, says of the quirk in state law limiting his profits on the crop he produces. “I hope it gets fixed by next season.”

CABOT -- The cannabis hanging from the rafters in Kelly Carney's north Pulaski County shed is -- on the conservative side -- worth $400 per pound, but he won't be able to get that, at least in Arkansas.

A quirk in the state's hemp law and the way it has been interpreted prevents licensed farmers from selling hemp flowers to retailers or consumers.

Instead, the flower can be sold only to licensed processors, who must turn it into products like CBD oil before it hits the retail market, according to the state Plant Board. Pre-processed hemp wholesales for about $45 per pound.

Meanwhile, plenty of hemp flowers from Kentucky, Oregon and other states are readily available in hemp stores from Little Rock to Fayetteville. At the retail level, the hemp flowers sell for more than $4,000 per pound, though it's typically sold by the gram ($10) or eighth of an ounce ($32).

As it stands, Arkansas hemp farmers have been cut out of their own market in their home state as it booms.

"It's a missed opportunity," Carney, who owns North Pulaski Farms, said. "I hope it gets fixed by next season."

Since Congress legalized hemp in the 2018 farm bill, states have struggled with how to regulate the substance that looks, smells and grows like illegal marijuana.

That's because pot and hemp are the same but for one important difference -- the levels of tetrahydrocannabinol, or THC. THC is the chemical compound in marijuana that is intoxicating.

Pot and hemp are both varieties of the cannabis plant. Pot has significant levels of THC; hemp, by definition, must have a THC content less than 0.3%.

Hemp, like pot, has significant levels of cannabidiol, or CBD for short. Clinical research remains thin, but CBD is the chemical compound found in cannabis that is associated with anxiety reduction and the treatment of pediatric epilepsy.

The hemp flower has become increasingly popular over the past year, said Mary Hearnes, who owns The CBD Store at Cabot. She said it gives people the relaxing benefits associated with smoking pot without the high.

The hemp flower can be smoked or processed at home to extract CBD.

"Hemp walks, talks, looks and smells like marijuana," Hearnes said. "People always say to me they smoke marijuana for the relaxation not the high. I used to laugh."

If she could, Hearnes would prefer to buy hemp flowers from Arkansas farmers, but currently, she can only buy them from out of state.

The Plant Board says the General Assembly would have to take action for that to occur.

The state's hemp program was created in 2017 under a provision in the 2014 federal farm bill that allowed states to create research pilot programs, so the Arkansas Agriculture Department, which houses the Plant Board, has remained focused on the research aspect.

The program rules were adopted in mid-2018, so the first hemp-growing season in Arkansas just concluded.

The state has issued 124 licenses for growers and 33 for processors, according to the Agriculture Department. Farmers planted 1,765 acres of hemp this year, according to department data, but only about a third of those acres were harvested.

The Plant Board's rules go on to prohibit the sale of leaf or floral material to any person who doesn't have a hemp processing or growing license, meaning that Arkansas-grown hemp must undergo some level of processing to be turned into a "hemp product" before hitting the retail market.

"State Plant Board Regulations currently permit the sale or transfer of stripped stalks, fiber, dried roots, seed oils, nonviable seeds including seed meal and seed oils for consumption as human food or animal feed, floral and plant extracts (excluding THC in excess of 0.3%), and other marketable products to members of the general public, both within and outside the state, provided that the marketable hemp product's decarboxylated delta-9-THC level is not more than 0.3 percent," Lyman said in an email.

Farmers think that's silly. They ask: Why can you buy out-of-state hemp flowers but not Arkansas-grown hemp flowers?

Ironically, the state's medical marijuana law specifically requires all medical cannabis that is sold in Arkansas dispensaries to have been grown at a licensed facility in Arkansas.

Rep. David Hillman, R-Almyra, was the sponsor of Act 981. He said it wasn't his intent to prevent farmers from selling the hemp flower, but that the bill was drafted before the federal legalization of hemp, noting that he and legislative staff members worked to ensure it complied with federal law.

Hillman said he plans to work on making the program less restrictive the next time state lawmakers convene for a regular legislative session, which will be in 2021.

"A lot of those restrictions we placed on the program in 2017 could probably be taken off," Hillman said in an interview.

Hemp farmers have found creative ways to get around the Plant Board's rules. Though they declined to have their names published, several farmers sell their dry flower harvest to shell companies in other states that then resell it to retailers in Arkansas, so it appears the flowers came from another state. In some cases, the flowers never actually leave Arkansas.

At least one grower has decided to risk running afoul of the Plant Board.

The owners of Ouachita Farms of Saline County decided in September that they'd take their chances selling the flowers, said co-owner David Owen.

Owen's group sells its flower harvest online and at its Hot Springs store The CBD Tasting Room. The price is $9.95 for strains like Arkansas Kush and Cherry Wine.

"It's just time to go ahead and bring it all out there," Owen said. "People are interested in locally grown. They want to know where it came from and can go out to the farm and see it."

Owen said that Ouachita Farms decided to sell the flowers in Arkansas after a federal judge struck down an Indiana law that criminalized possession of smokable hemp.

The law was passed in Indiana because it's difficult for law enforcement officers to distinguish between hemp and pot without lab testing, The Indianapolis Star reported.

The judge's ruling said that the Indiana law conflicted with federal law because it interfered with the right to transport lawfully produced hemp across state lines.

Owen thinks that ruling has broader implications in Arkansas. His company stands ready to file a lawsuit if need be.

"If it's going to come down to a battle, which I hope it doesn't, we're prepared for it," he said.

If he wasn't selling the hemp flower, Owen said Ouachita Farms would struggle to break even. It's good if hemp biomass sells for $15 to $20. The flowers, though, can sell for $500-$800 per pound, according to Owen.

He said his company has worked hard to comply with the Plant Board's regulations. He also said that he understood the board's plight.

"I was born and raised in Arkansas," he said. "It's an agriculture state to the core. Arkansas could be a leader in this."

Visitors also are greeted by the strong smell of -- well -- weed, but they'll find nothing here to get high, despite the Bob Marley playing through the radio in Carney's curing shed (he played reggae at the farm long before hemp grew there, Carney said).

He started growing hemp this year because he saw an opportunity to grow a profitable crop that could support his main love, growing produce.

The first year of hemp growing taught Carney a lot. He grew some of the plants in shade, some in a sunny field and some in a greenhouse.

Some of his plants had to be destroyed because the Plant Board's testing found a higher than 0.3% concentration of THC. Whether it's heat, drought or prolonged rain, Carney said that stress can cause hemp plants to grow "hot," with high THC levels.

The shaded crop did the best, he said.

He planted 2 acres of hemp this year, and he plans to double that next year. While he has a nice profit margin by extracting oil from his flowers, he sure hopes that he'll be able to sell the harvest to retailers and the public next year.

"This is the first thing I've ever grown that I can't sell locally," he said.

But he doesn't plan to chance it.

"I'm not willing to risk my license," Carney said. "I've got too much in it." 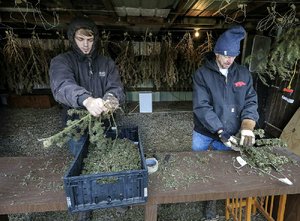 Photo by John Sykes Jr.
Walker Elkins (left) and Larry Ferguson clean hemp plants at North Pulaski Farms near Cabot. Owner Kelly Carney said he had to destroy some of his hemp plants after Plant Board testing found a higher than 0.3% concentration of tetrahydrocannabinol, or THC, the intoxicating compound in marijuana. 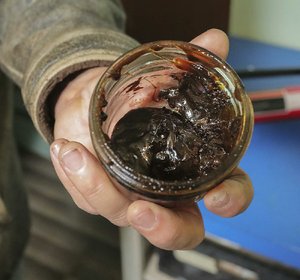 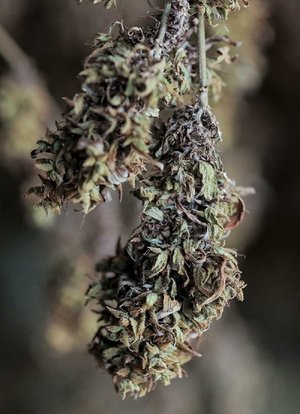 Photo by John Sykes Jr.
The hemp flower “walks, talks, looks and smells like marijuana,” said Mary Hearnes, who owns The CBD Store at Cabot, adding that it provides the relaxing benefits associated with smoking pot but not the high.