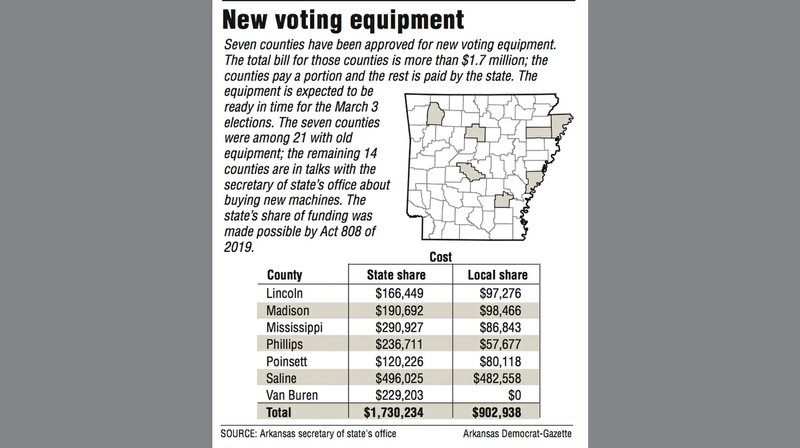 Seven counties are scheduled to have new voting equipment in time for the March 3 elections, reducing by a third the number of counties using old equipment, under recently signed contracts.

Secretary of State John Thurston's office signed contracts in the past several weeks with Nebraska-based Election Systems & Software for Lincoln, Madison, Mississippi, Phillips, Poinsett, Saline and Van Buren counties, according to records in the secretary of state's office.

The records show the state's share of the cost for new equipment in the seven counties will total $1.7 million, with the countries contributing $902,938. Among the seven, Saline County will get the largest state contribution, $496,005, to match its $482,588.

"We had two trucks deliver it today," Saline County Clerk Doug Curtis said Thursday. "We are unloading them right now, and it is cold outside."

Saline County's 72,798 registered voters are the fourth-largest number among the state's 75 counties, according to figures provided by Chris Powell, a spokesman for the secretary of state's office. The state has 1.71 million registered voters. Pulaski County has the most with 247,000; Benton County ranks second with 152,579 and Washington County is third with 130,052.

"Our old equipment is on its last legs and has been for a while," she said. "We really needed new equipment."

Other than Drew County, the 13 counties with old equipment and no contracts with the secretary of state's office are Baxter, Bradley, Conway, Fulton, Jefferson, Lee, Monroe, Newton, Pulaski, Scott, Searcy, Stone and St. Francis.

"We are still having ongoing discussions with the 14 counties," Naumann said.

Leslie Bellamy, elections director for the secretary of state's office, said, "They are worried about the time it takes to train their poll workers and their staff and, with the primary being in March instead of May, that moves them up two months on all their other stuff.

Some of them don't want to get new equipment during the candidate filing period, which starts Monday, "because a lot of these deliveries will happen in or around filing or right around the time they have got to have their coding completed for the primary, so they just didn't feel like they had time," she said.

The state money is available under Act 808 of 2019. That law diverted $8.24 million in excess money from the property-tax relief trust fund to the county voting systems grant fund. (The law also increased the homestead property-tax credit from $350 to $375 per parcel.)

About $2 million of these funds was used to reimburse three counties -- Benton, White and Ashley -- for half of what they previously paid for new equipment.

Fifty-four of the 75 counties had updated equipment by the 2018 general election a year ago. About $9.7 million from the secretary of state's budget, $4.4 million in one-time federal money and $8.7 million from the counties paid for this equipment under deals brokered by then-Secretary of State Mark Martin's office, those officials said last year.

The old machines were bought with federal money under then-Secretary of State Charlie Daniels in 2006.

Thurston's office had estimated that new machines would cost about $15 million, before he announced Aug. 22 that he had negotiated a 15% discount with Election Systems & Software. Daniels and Martin also bought machines from the same company.

Pulaski County Judge Barry Hyde said Wednesday he hadn't heard from the secretary of state's office since a meeting weeks ago.

But then, according to Naumann, he and Hyde talked Thursday morning about equipment for the county.

But Gomez said, "There is not an official proposal at this time."

Gomez said she wants to work with the Quorum Court and Hyde to provide the best system possible for the county.

Hyde said the county is prepared to use the equipment it has on March 3.

But county officials want new equipment for the general election, he said.

A month and a half ago, Pulaski County officials said they were reviewing a roughly $1.56 million contribution in county money needed to match $1.56 million from the state -- but the money wasn't in the county's budget.

Thurston's office has used a formula for determining a county's matching money. The formula factors in the poverty rate, per-capita income, unemployment rates and population change, and is based on variables used by the Arkansas Economic Development Commission.

But officials in the secretary of state's office have said a county's contribution could decline. For example, they said, its equipment needs will change with vote centers and could offer significant savings.

Under a contract signed last week, Van Buren County will receive $229,202 from the state for new equipment and not be required to provide matching money, according to the secretary of state's office.

Van Buren County Clerk Pam Bradford said the county's Election Commission decided to reduce the number of voting machines it needs by cutting its 21 polling places to four vote centers. At those centers, voters cast their ballots no matter where they reside in the county. The change reduced the county's money obligation to nothing.

"Once everybody understands, it will be better for everyone," she said. "Wherever they are in the county, they'll be able to vote."

Bradford added, "We are excited to get the new machines. They are supposed to be user-friendly."

Bellamy of Thurston's office said Van Buren County "had too many polling sites for 8,000 or so registered voters, so they made the reductions and we give the savings to them."

Van Buren has 9,985 registered voters, according to the figures provided by Powell.

Bellamy said Stone, Searcy, Jefferson and Fulton counties will be hard-pressed to come up with matching money because "they just don't have the funds."

The existing equipment ranges from 5 to 12 years old, he said. "We can probably make it another election cycle, but that is pushing the usable life span," Burnett said.

Meanwhile, Naumann said, "From what we have seen with some of these counties being able to reduce the local share, I think there is still hope for those counties, if they look at like the Van Buren counties of the world, and say well there is a way to make this happen.

"We are not going to give up hope quite yet. But at this point if we don't pick up any more or just a couple before the primary, we're probably going to wait until after the primary election and go back and circle back with those counties and try to get as many of those as possible," he said. "They will have plenty of time between the primaries and the general [election] to do it, but we would like to make it sooner than later."

Van Buren County is the latest county planning to switch to vote centers.

Little Rock Democrat Susan Inman, a former director of elections in the secretary of state's office and former Pulaski County election official who lost to Republicans Martin in 2014 and Thurston in 2018, has been a sharp critic of what she has called the push by the secretary of state's office to persuade counties to create vote centers. Inman said the centers reduce voter access and turnout.

But Bellamy said centers are "really no more than early voting at every location.

"Every ballot style is at every location and it is not a matter of trying to disenfranchise [voters]. It simply makes it easier on everybody, like if you live in a different area than where you work, you can vote there in town on Election Day instead of having to try and do early voting. It is really for the ease of the voter," she said.

"Most of these counties that have decided to go that path have seen that it so much easier [and] their voters like it. We haven't had one county revert back."