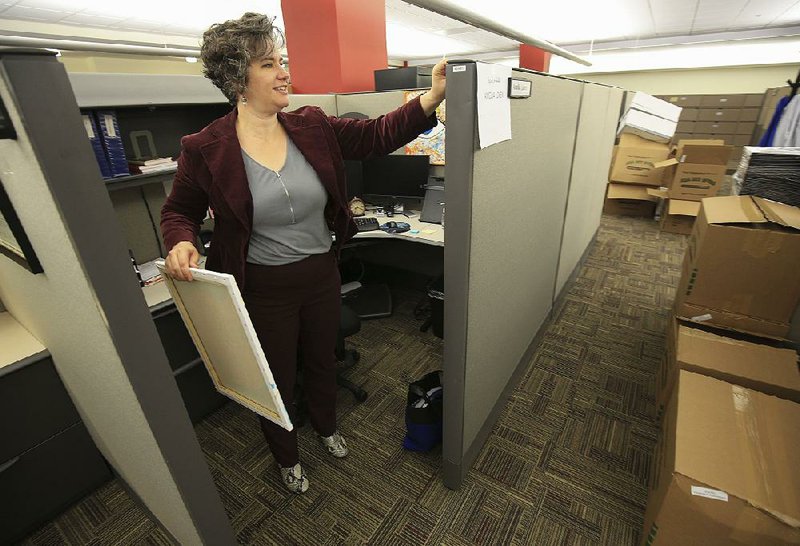 Amelia Loken, an administrative specialist with the Telecommunication Access Program, hangs some artwork in her cubical Wednesday in the new Department of Commerce offices in the Riverdale area of Little

Joe Baxter, deputy director of Arkansas Rehabilitation Services, had a question for an employee who moved last week into a cubicle in the building of the agency's parent, the state Department of Commerce.

"Is there anything I can do for you except for an enclosed office?" he said.

These type of discussions will become more common in the Commerce Department, the Department of Transformation and Shared Services, and potentially other executive branch state agencies.

That's because transformation officials said they want to place more employees in cubicles and fewer in private offices to more efficiently use building space. They want to make other changes, as well.

In February, the Arkansas Development Finance Authority bought what has been known as the Verizon 4 building for about $26 million.

During the next several months, about 720 more employees of the agencies within the Commerce Department are to be moved in the six-story, 303,000-square-foot building in the Riverdale area of Little Rock.

Anne Laidlaw, State Division of Building Authority Director, said, through a spokeswoman, it's the largest moving of executive branch employees during her 25 years in state government, as well as the biggest executive branch building purchase in that time.

The last large moving of state employees was several years ago, when about 275 employees moved to 900 W. Capitol Ave. in Little Rock, according to Laidlaw. The Arkansas Economic Development Commission and Arkansas Development Finance Authority are there now.

Seventy-five Rehabilitation Services employees were moved last week to the building in Riverdale.

The Economic Development Commission, the Securities Department and the Division of Services for the Blind's offices are tentatively scheduled to move into that building in December.

The Bank Department, Development Finance Authority and Office of Skills Development's offices are tentatively set to move there in January, said Alisha Curtis, chief communications and legislative director for the Commerce Department.

Those agencies are now in various locations in Little Rock.

The Securities Department is on East Markham Street. The Division of Services for the Blind is on Main Street. The Bank Department is in west Little Rock, and the Office of Skills Development is west of the state Capitol.

The Insurance Department is tentatively to move in February from its office on West Third Street to the Riverdale building, she said.

The Division of Workforce Services' main office, now west of the Capitol, will move sometime in 2020, Curtis said.

"We are the first ones [to move], so it is kind of teething pains of getting in the building. We started last week on turning up the outlets for data, for computers and phones, so when we got in here Monday the phones were really set up, so that was a plus, although we had some issues with numbers ringing wherever," he said Wednesday in the agency's new home.

"Computers are still kind of a challenge," Baxter said. "We have internet access, but I don't actually have my email servers, but I can still access it through the web.

"Getting my folks settled and used to this [cubicle work space]. They used to have offices," he said. "They are just getting used to the noise levels. It was really loud here Monday, and then yesterday it was just quiet as a church, so it was nice. I think people are really getting used to it."

The Department of Transformation and Shared Services' secretary's office moved into the state's Winthrop Rockefeller Building east of the Capitol on Sept. 28, where the department's Employee Benefits Division and Division of Building Authority already are located, said Alex Johnston, the department's chief communications director.

The department's personnel management and procurement offices -- now in the Department of Finance and Administration building south of the Capitol -- are tentatively to move to the Rockefeller Building in March or April, she said.

The department's Geographic Information Systems agency, now in the Multi-Agency Complex on the Capitol's west side, will move to the Rockefeller Building in February, she said.

The Department of Information Services also is in the Multi-Agency Complex, but moving it "is still in development as the DIS Data Center is also in the MAC Building," Johnston said. "We have no definite plans at this point."

Asked whether the moves will mean, bottom line, if there are savings or increased expenses, Johnston said, "Overall, the relocation will cost the department less money.

"We will not know the exact savings until we get the space redesigned," she said. "However, we know our new office model will generate a significant reduction of square footage that calculates to rent reduction."

The Commerce and Transformation departments are Cabinet-level agencies under Gov. Asa Hutchinson's reorganization that consolidated 42 agencies into 15 departments reporting directly to him effective July 1. The reorganization also melded more than 200 state boards and commissions inside those departments.

The Republican governor has projected the reorganization will save at least $15 million a year starting in fiscal 2021.

The 15 departments together rent 4.2 million square feet of space and pay $47.7 million a year in rent, said Johnston.

What officials in the Transformation Department call the best example of the four C's model is the Nov. 1, 2018, move of a support center for an agency of the Department of Finance and Administration from the privately owned Union Plaza building at Capitol and Louisiana streets to the Rockefeller Building.

The support center is under the Arkansas Administrative Statewide Information System, which is the state's computerized accounting system.

The four Cs concept was developed by the Division of Building Authority, which is led by Laidlaw, using information from Tennessee and other corporate/private sector trends, said Johnston.

"Charlie Collins, our chief innovation officer, gets the credit for naming the plan the '4C's,'" she said. Collins is a former Republican state representative from Fayetteville, who lost his reelection bid a year ago.

"While we researched what other states are trending toward in their facilities and management of facilities, our plan is original to Arkansas and our specific needs," Johnston said.

According to a state document describing the four C's plan, the major parts of the plan include:

• Sharing work areas and equipment to reduce the need for duplicate rooms.

• Assessing existing office furnishings and selecting only pieces that are most suitable and functional.

"The scale for work stations, chairs and tables can be reduced without sacrificing comfort. When and where possible, reconditioned furnishing or purchases from [marketing and redistribution] will be preferred over new purchases."

• Reducing file rooms and storage to active records requiring daily or frequent access, while all other records, material and inventory will be moved to less costly space elsewhere.

"Efficiency of record storage should be evaluated for electronic storage and all decommissioned furniture and equipment will be scheduled for pickup by [marketing and redistribution] within 30 days or less, eliminating the need to store unused property."

• Having common areas such as elevator lobbies, corridors and break-rooms become an integral part of the office space when designed for mixed use, encouraging employee interaction with white boards, messaging centers/screens, mini-conversation areas and coffee bars.

The Department of Labor and Licensing office is the only other department "we are discussing a location change at this time ... and the exact location has not yet been determined," Johnston said.

The secretaries of each of the 15 Cabinet departments were required to submit to the governor by Friday an analysis of their agencies' properties, leases and possible ways to share space.

"These reports will help guide the decision-making as we move forward with transformation," Johnston said.