Cadron settlement remembered as part of Trail of Tears 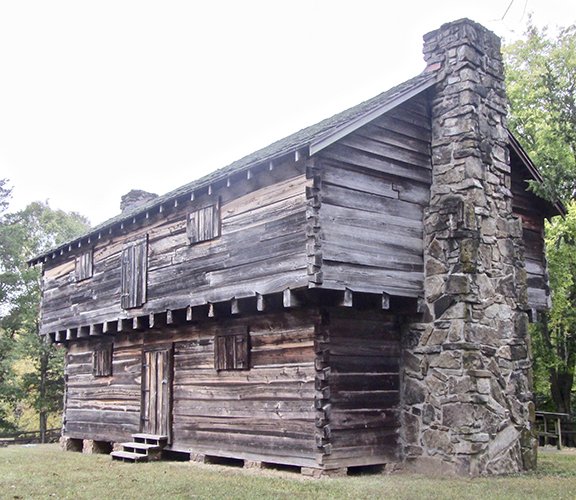 Cadron Settlement Park displays a replica of a blockhouse built above the Arkansas River soon after the settlement's founding in 1818. (Photo by Marcia Schnedler, special to the Democrat-Gazette)

CADRON — A simple plaque marked with 50 names delivers a more visceral and poignant message about the forced migration west of American Indians in the 1830s than all the many "Trail of Tears" markers along Arkansas highways.

Tucked at ground level, the memorial can be searched out at Cadron Settlement Park, the bluff-top site in Faulkner County open again after spring flooding closed its access road for a while.

By tallying specific victims of a cholera outbreak, the inscription infuses a personal touch to the miseries suffered by about 60,000 Cherokees and four other Indian nations displaced from their southeastern homelands by white settlers. They were removed, often forcibly, in keeping with an American credo later labeled as "Manifest Destiny."

The park, five miles west of Conway, is listed on the National Register of Historic Places, for reasons that stretch further back than the Trail of Tears misfortune of 1834.

The site's most prominent structure is the replica of a two-story blockhouse built not long after 1818, when Cadron became central Arkansas' first permanent white settlement, totaling 30 or 40 families. The sturdy wooden building functioned as residence, tavern and protection for fur traders. The interior can occasionally be visited on Saturdays.

Located near the confluence of the Arkansas River and Cadron Creek, the town was laid out by trader John McElmurry and three other investors. A land boom in what was mostly wilderness raised prices of half-acre lots as high as $1,300.

The speculation came mainly because Cadron in 1820 was being considered as the territorial capital and the seat of Pulaski County. Neither prospect came true, and lots sold for as little as $3.50 once the hopes of prosperity faded. The town was deserted by 1831.

Three years later, a crowded vessel carrying some 700 Cherokees en route to exile in what later became Oklahoma had to dock here due to low water on the Arkansas River. The cholera that spread among the stranded passengers claimed 100 or more lives. 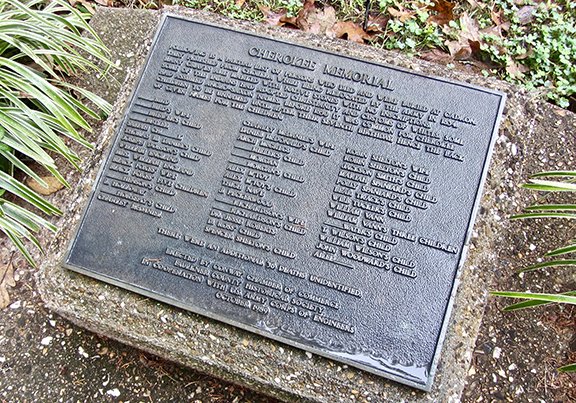 A plaque at Cadron Settlement Park lists the names of Cherokee victims of cholera who died there while being transported west. (Photo by Marcia Schnedler, special to the Democrat-Gazette)

Among those listed in raised letters on the marker are 13 Cherokee men, some with full names, others with just first or last. It is noted that "some of the Indians had adopted the Christianity of whites, some had assumed Anglo-Saxon names."

They included William England, Charley McDonald, William Vann and Dr. Jesse Roberts. One traditional Cherokee name among the dead is "Bird," with no first name given. Also on the list are seven women, denoted by their husband's names, such as "Robin Shelton's wife" and and "Porter Shelton's wife."

Thirty of the list's 50 victims were children, hardly any with listed identities. The inscription explains that "before 1850, it was common for Cherokee children to be unnamed until their seventh birthday."

The hardest family blow seems to have fallen on Black Fox, who survived but lost his wife and five children. William Vann died, as did his three children. Cholera was especially fatal to youngsters, the more so among the exhausted and demoralized throng of 700.

Along with the sorrowful details of past injustice, one Cadron Park sign bears an upbeat inscription:

"Despite the hardships of the journey, the people of the five tribes of the Southeast established new lives in the West. They stand now as successful sovereign nations, proudly preserving cultural traditions, while adapting to the challenges of the 21st century."

With the Quapaw Nation having partly opened its casino in Pine Bluff and aiming for full operation next year, it could be that American Indians will finally get a big payback in our state for the depredations of the 1830s. It will come in the form of the many millions of dollars from the slot machines and other gambling at Saracen Casino Resort in years ahead.

To reach Cadron Settlement Park, operated by the city of Conway under lease from the U.S. Army Corps of Engineers, go five miles west from Conway on U.S. 64 (Old Morrilton Highway). Turn left on Arkansas 319 at the sign marked for the park, where the highway ends. Admission is free. Faulkner County Museum has some information; call (501) 329-5918.