Decision tied to U.S. pullout from pact by Compiled by Democrat-Gazette staff from wire reports | November 5, 2019 at 6:52 a.m. 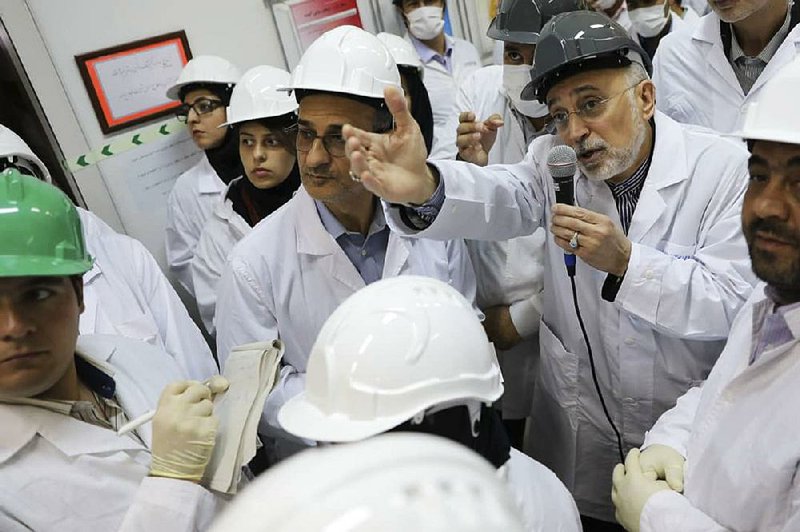 Ali Akbar Salehi. head of the Atomic Energy Organization of Iran, noted the country’s ability to step back from its enrichment efforts if European nations offer a new deal. “If they return to their commitments, we also will go back to our commitments,” he said Monday at the Natanz enrichment facility.

TEHRAN, Iran -- Iran on Monday broke further away from its collapsing 2015 nuclear deal with world powers by doubling the number of advanced centrifuges it operates, linking the decision to U.S. President Donald Trump's withdrawal from the agreement over a year ago.

The announcement, which also included Iran saying it now has a prototype centrifuge that works 50 times faster than those allowed under the deal, came as demonstrators across the country marked the 40th anniversary of the 1979 U.S. Embassy takeover that started a 444-day hostage crisis.

By starting up advanced centrifuges, Iran further cut into the one year that experts estimate Tehran would need to have enough material for building a nuclear weapon if it chose to pursue one. Iran long has insisted its program is for peaceful purposes, though Western fears about its work led to the 2015 agreement that saw Tehran limit its enrichment of uranium in exchange for the lifting of economic sanctions.

Visiting Iran's underground Natanz enrichment facility, Salehi pushed a button on a keyboard to start a chain of 30 IR-6 centrifuges as state television cameras filmed, increasing the number of working centrifuges to 60.

"With the grace of God, I start the gas injection," the U.S.-trained scientist said.

Salehi also announced that scientists were working on a prototype he called the IR-9, which worked 50 times faster than the IR-1.

As of now, Iran is enriching uranium up to 4.5%, in violation of the accord's limit of 3.67%. Enriched uranium at the 3.67% level is enough for peaceful pursuits but is far below weapons-grade levels of 90%. At the 4.5% level, it is enough to help power Iran's Bushehr reactor, the country's only nuclear power plant. Before the atomic deal, Iran only reached up to 20%.

Iranian President Hassan Rouhani will announce further steps away from the accord sometime soon, government spokesman Ali Rabiei separately said Monday, suggesting Salehi's comments could be followed by additional violations of the nuclear deal. An announcement had been expected this week.

Iran has threatened in the past to push enrichment back up to 20%. That would worry nuclear nonproliferation experts because 20% is a short technical step away from reaching weapons-grade levels of 90%. It also has said it could ban inspectors from the United Nations' nuclear watchdog, the International Atomic Energy Agency.

The Vienna-based agency declined to comment on Iran's announcement. The agency previously said Iran planned to build two cascades, one with 164 IR-2M centrifuges and another with 164 IR-5 centrifuges. A cascade is a group of centrifuges working together to more quickly enrich uranium.

Iran broke through its stockpile and enrichment limitations to try to pressure Europe to offer it a new deal, more than a year since Trump unilaterally withdrew America from the accord. But so far, European nations have been unable to offer Iran a way to help it sell its oil abroad as it faces strict U.S. sanctions.

Salehi again expressed Iran's ability to step back if a deal is made.

Maja Kocijancic, a spokeswoman for the European Commission, urged Iran "to reverse such steps without delay and to refrain from any further measures that would undermine the nuclear deal."

"Thanks to God, today the revolution's seedlings have evolved into a fruitful and huge tree that its shadow has covered the entire" Middle East, said Gen. Abdolrahim Mousavi, the commander of the Iranian army.

"This action further constricts the supreme leader's ability to execute his agenda of terror and oppression," Treasury Secretary Steven Mnuchin said in a statement.

The sanctions target some of Khamenei's closest advisers, including his second son, Mojtaba Khamenei, who often represents his father at official functions even though he has never been appointed to a government position, U.S. officials said.

Others sanctioned include Ebrahim Raisi, the newly appointed head of Iran's judiciary, and Mohammad Mohammadi Golpayegani, the supreme leader's chief of staff. The list also includes an adviser who arranged credit lines for oil shipments to the Syrian government, and the head of Iran's Armed Forces General Staff, the top military body in Iran.

The Treasury Department also sanctioned Hossein Dehghan, one of Khamenei's military aides, who was a commander in Lebanon during the 1983 bombing of the U.S. Marine barracks in Beirut that killed 241 service members.

"Today's anniversary is a stark reminder that we are dealing with, today, the same regime that sprung up 40 years ago; the same regime that remains committed to violence and hostage taking that our diplomats encountered so long ago," said a senior administration official, referring to the 1979 student takeover of the U.S. Embassy.

The official spoke on the condition of anonymity under the Trump administration's media guidelines.

"Forty years later, the revolutionary regime in Tehran has proven, time and again, that its first acts after gaining power were a clear indication of its evil character," said Secretary of State Mike Pompeo in a statement. "The regime continues to unjustly detain Americans and to support terrorist proxy groups like [Hezbollah] that engage in hostage taking."

Pompeo expanded on his characterization of Iran in a ceremony at the State Department to commemorate the anniversary, an event attended by many of the surviving hostages, their relatives and the families some of the five Americans known to be missing or imprisoned in Iran. Pompeo demanded Iran release them.

"Everyone involved in the Iran hostage crisis showed the world what they were made of," he said, extolling the courage of those who held up under captivity for 15 months. "The revolutionary regime showed their true malice and evil."

The State Department announced a $20 million addition to a $5 million FBI reward for information on the whereabouts of Robert Levinson, a retired FBI agent who vanished during a 2007 visit to Kish Island in Iran.

Levinson's family issued a statement pleading with the government in Tehran to end hostage taking.

"This sends a clear message from our government of how important it is that Bob Levinson be returned to his family and friends who love him," the statement said. "All the Iranian authorities need to do is send him home."

Information for this article was contributed by Nasser Karimi, Jon Gambrell, Deb Riechmann and Samuel Petrequin of The Associated Press; by Richard Perez-Pena of The New York Times; and by Carol Morello of The Washington Post.