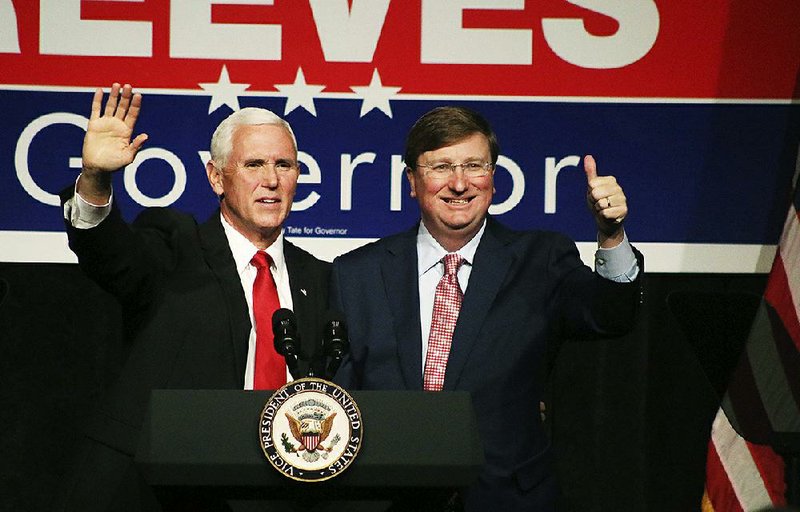 The rally at Rupp Arena reinforced one of Bevin's main campaign themes -- his alliance with Trump, whose popularity surpasses the governor's in the bluegrass state.

Trump, who easily carried Kentucky in winning the presidency in 2016, declared that Bevin's reelection today would send a signal to the country and his political adversaries.

"People try to distract us with national issues and get us thinking about things other than our well-being," Beshear said in a Monday radio interview on WKDZ. "Our families should be doing so much better. And I'm going to make sure they do."

The Kentucky contest is being watched for early signs of how the impeachment inquiry might affect Trump and other Republican incumbents in 2020. Among those with an especially keen interest: Senate Majority Leader Mitch McConnell, who's on the ballot himself next year in Kentucky.

McConnell took the stage Monday night in his home state to praise Trump's efforts to reshape the federal courts by appointing conservatives to the bench.

Bevin sounded confident about his prospects for a second term and said the president's eleventh-hour appearance would give him a boost.

"I think we're going to win, regardless," the governor told reporters. "I think we'll win even more, with this kind of wind in our sails."

Pointing to Bevin's conservative credentials, Trump praised the governor's opposition to abortion, his support for gun rights and his tough stance against illegal immigration.

Beshear accused Bevin of dividing people, and promised to be a governor who "listens more than he talks, who solves more problems than he creates and would never engage in the type of bullying and name calling we've seen."

Earlier Monday, Vice President Mike Pence campaigned in Mississippi for the Republican nominee for governor, who's in a tight race with the state's best-funded Democratic nominee in nearly a generation.

"Mississippi and America need Tate Reeves to be the next governor of the great state of Mississippi," Pence told hundreds of people at the Mississippi Gulf Coast Coliseum in Biloxi. "Tate Reeves is Mississippi. He's a strong conservative."

Reeves is in his second term as lieutenant governor. The Democratic nominee for governor, Jim Hood, is in his fourth as attorney general. They are on the ballot today along with two lesser-known candidates. The winner will succeed Republican Gov. Phil Bryant, who is limited by state law to two terms.

Mississippi is conducting its most competitive governor's race since 2003, when the state's last Democratic governor was unseated by a Republican.

Republicans have held the governorship in Mississippi for 24 of the past 28 years.

In a speech running about 30 minutes, Pence cast Hood as a liberal who is out of touch with Mississippians. He said Hood supported Hillary Clinton for president, was soft on Second Amendment protections and once denounced the defunding of Planned Parenthood.

Pence made one brief allusion to congressional Democrats' impeachment inquiry, saying a vote for Reeves would "send a message to Washington, D.C., that enough is enough, and that Mississippi is tired of the endless investigations and partisan impeachment."

Information for this article was contributed by Emily Wagster Pettus and Kevin McGill of The Associated Press.