Little Rock School District teachers plan "a walk-in" at 7:30 a.m. Wednesday as a show of solidarity for students and traditional public schools, the Little Rock Education Association announced on its Facebook page.

The district employee union has invited community members to join the educators to participate in the walk-in protest, where employees and others enter the workplace together.

"The Governor and his appointed state board attempted to re-segregate Little Rock students, but the union and the community stood together to stop those efforts," the union's post stated.

"Now, we must come together again in solidarity as one Little Rock School District to show the Governor and those who wish to privatize our public schools that we will do whatever is necessary to protect our students' futures."

Little Rock Superintendent Mike Poore said Monday that the district would "try to celebrate" the walk-in as a way to get more people involved in the public schools, such as volunteers for an upcoming reading event.

He said he would view the walk-in as "positive."

The Little Rock district, classified by the state as a district in "Level 5 -- in need of intensive support," has been under state control and without an elected school board since January 2015.

That's because six of its then 48 schools had chronically low achievement on state tests.

While the district has been under state control, some of those original schools classified as failing have improved, but the number of schools considered failing has increased to eight.

On Oct. 10, the state Board of Education agreed to put the district in a limited form of local control under an elected school board, with an election in November 2020. The state board also agreed to work with the district and Little Rock Mayor Frank Scott Jr.'s office to create some community schools offering enhanced services.

The state board also decided Oct. 10 to end the union's 50-year role as negotiator of employee contracts, effective with the expiration of the contract last Thursday.

Employee and community discontent over the state board decisions on limited control and union recognition sparked talk of a potential teacher strike.

The district prepared for the possibility of a strike by trying to sign up people to work as teachers, saying classes would be held if there were a work stoppage.

In an interview with the Democrat-Gazette on Thursday, regarding questions about what happens without the union involved in negotiating employee contracts, Gordon said, in part, "We still will represent our members in grievances and disciplinary actions. They still have the right to that representation as members and under state law."

Gordon had said the association will continue to advocate for students, which she said means she will still confer regularly with Poore and state Education Secretary Johnny Key on issues involving students, teachers and learning conditions in the schools. Key serves as the school board for the state-run district.

"That's not going to change just because they withdrew recognition," she said, referring to her conferring with officials. "All withdrawal of recognition means is that they withdrew our right to negotiate a contract."

That responsibility, she said, will now go to a personnel policy committee, which she said could wind up with at least one -- if not more -- Little Rock Education Association members sitting on it.

Districtwide, preliminary figures show attendance was down about 1,800 students, about 300 more than average.

Poore said he did not know why, but he said rumors of a strike and illness may have contributed to the slightly larger number of absences Monday.

Information for this article was contributed by Nyssa Kruse and Dale Ellis of the Arkansas Democrat-Gazette. 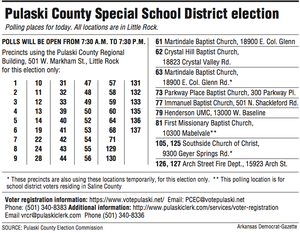