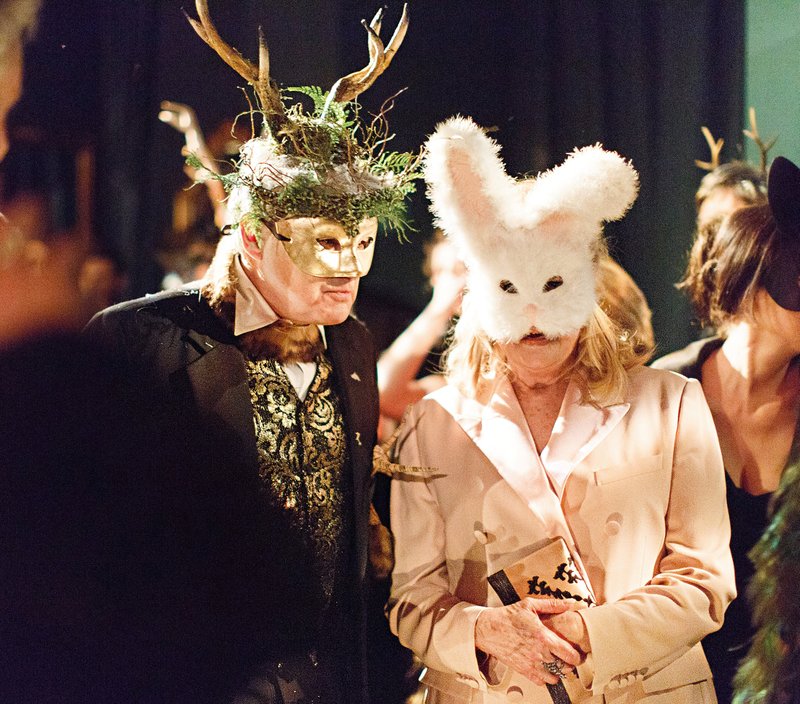 Bronson van Wyck Sr., the event planner's father, escorts family friend Candice Bergen at the Bal des Sauvages in 2015. Bergen wore the same pink bunny mask to this party that she wore to Truman Capote's Black and White Ball in 1966. She told van Wyck that the mask had been waiting for this party in the top of her closet since 1966. (Photo by Allan Zepeda, special to the Democrat-Gazette)

A 45-year-old Arkansan whose ancestry stretches back to the founding families of New York, but who grew up on a secluded rural estate in the Jackson County town of Tuckerman, literally wrote the book on parties that he has thrown for the biggest names in entertainment, society and industry all over the world, earning praise, respect and prestigious awards along the way.

Bronson van Wyck's book, Born to Party, Forced to Work: 21st Century Hospitality was released Oct. 23, and has been validated with reviews by the likes of Martha Stewart ("Energy, joie de Vivre, incomparable glamour, vivaciousness and otherworldly beauty are just a few of the building blocks Bronson employs to accomplish his wizardry at any party venue ..."); Diane von Furstenberg ("I've watched Bronson van Wyck grow up, as he's turned his passion into a profession."); Jessica Seinfeld ("This book is like a shot of tequila at the beginning of an unforgettable night."); and Town & Country magazine ("a truly delicious read.").

Van Wyck is an event planner extraordinaire who, along with his mother, Mary Lynn, and sister, Mimi, has built arguably the most successful party production company of them all, Van Wyck & Van Wyck, based in New York. Van Wyck and his yellow lab Cat (short for Catherine) live comfortably in their 5th Avenue home when work allows and also travel the world together putting on elaborate soirees and weddings and events, hobnobbing with celebrities, politicians and people from all walks of life who have hired him to make their events special.

But when the confetti and glitter have been swept up, when the space once again becomes an abandoned greenhouse or beach or an out-of-the-way spot surrounded by ancient oak trees, van Wyck and Cat can't wait to get back to Tuckerman. Van Wyck comes to see his grandmother; Cat comes to see her much larger brother Louie, who prefers the country life.

Van Wyck gets home to Arkansas "as much as I can. I have a grandmother who's 95, and I love spending time with her. So I try to go back as much as I can because she can't really come up here anymore. I mean it varies from year to year, but I'd say four to 10 times a year."

As for Cat, van Wyck says, "She goes everywhere with me. I mean, literally, everywhere. We're going to London next week. We're going to be in Paris at end of the month .... But she likes Arkansas most of all. She will typically spend about six weeks in Arkansas in the wintertime because it's so cold here. Her brother's there and they run around. They are literally not out of physical contact with each other the whole time. They walk around with their shoulders touching." 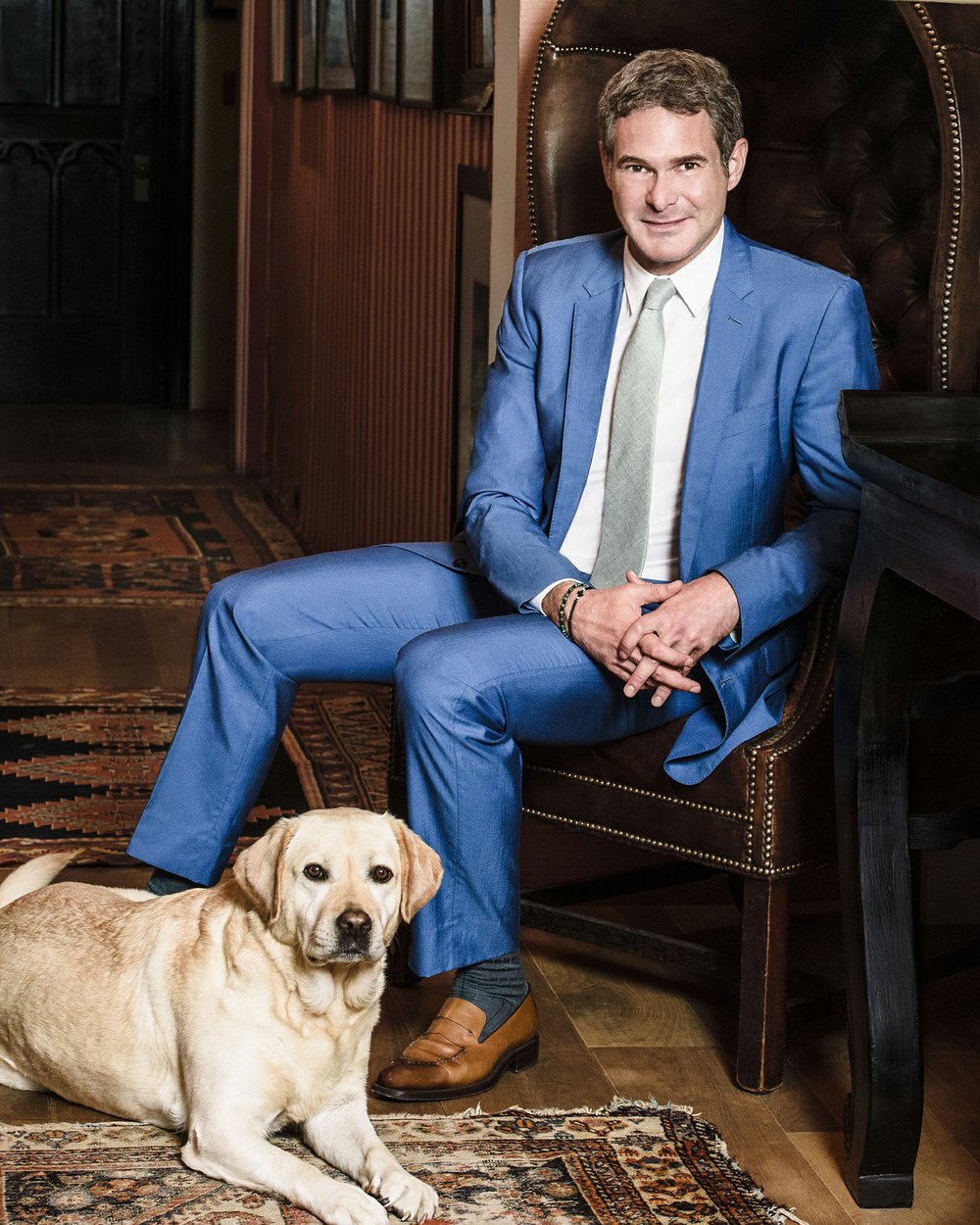 Arkansan/New Yorker Bronson van Wyck travels the world to throw fabulous parties as one of the country's top event planners. He and his dog, Cat, get back home to Tuckerman every chance they get. (Photo by Hannah Thomson, special to the Democrat-Gazette)

THE PARTY ALWAYS GO ON

Born to Party opens with a prologue titled "Man Plans .... And God Laughs," and illustrates one of van Wyck's worst fears — glitches in his otherwise tightly run sequence of events, his party trademarks. Van Wyck describes in hilarious detail how, at a very important party for two very important birthday boys, the hired band was having a very long prayer session in their dressing room and would not answer repeated calls that it was time to take the stage. Guests and hosts were getting tense.

"I opened the music library on my phone. I didn't have to scroll far. Selecting a song, I handed the phone to the engineer. 'Patch this into the dressing room. Full volume. The prayer revival's over. It's showtime," van Wyck writes.

Seconds later, the band spilled out of the dressing room and took the stage. The curtain rose and Earth, Wind & Fire began playing their biggest hit, "September."

Van Wyck had unleashed the blare of AC/DC's "Highway to Hell" into the tardy band's room.

"There's going to be something in that whole situation that is not going to work. And you've just got to deal with it because the people are there. So roll with the punches," van Wyck says, after having described another party where things didn't go as planned. 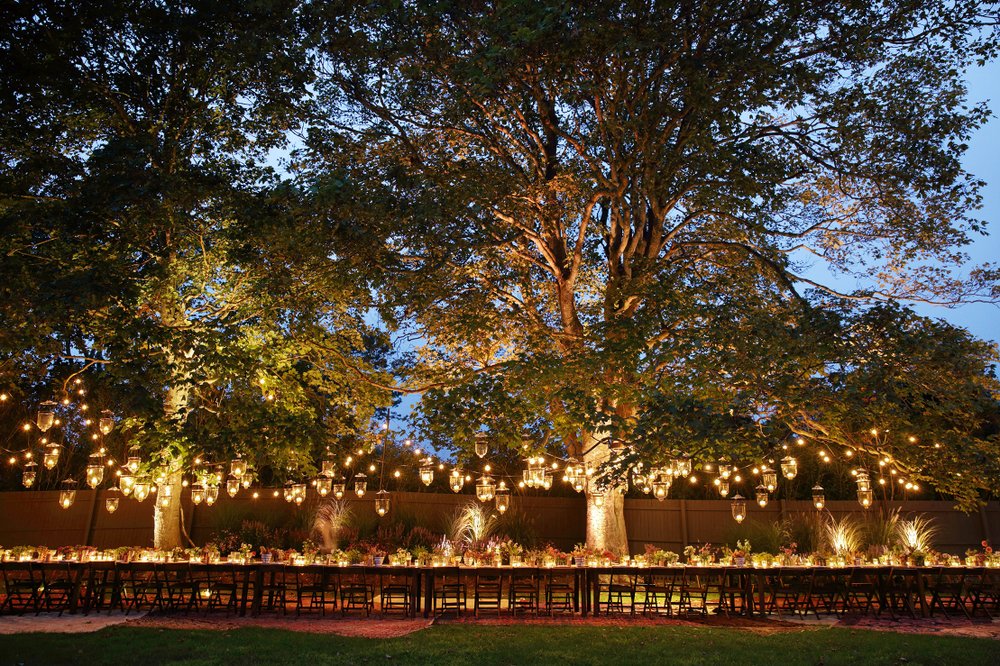 Having majored in history at Yale, van Wyck's party philosophy and many of the themes he has used over the years are taken from the past. From Greek myth to Martha Washington, Homer to Queen Victoria, historical figures and their contributions to society as well as their penchant for perfect parties, are themes throughout the book. (Did you know, for example, that until Queen Victoria wore white to her wedding that black and red were the preferred nuptial colors?)

Van Wyck has spent a great deal of time in New Orleans throwing out of this world debutante parties for the city's well-heeled Carnival class. At one particular party described in lavish detail, van Wyck and company erected a replica of the facade of Versailles' pre-Louis XIV royal hunting lodge, that masked a tent behind it. That tent led into another and another, with each elaborately decorated and furnished as salons, culminating in the tent's Gallery of Stags, featuring more than 50 taxidermied beasts hanging on the walls. The party was featured by The Times-Picayune's longtime society columnist, Nell Nolan, who gushed to co-workers at the time about its perfection.

"Well, I think parties in New Orleans are on a whole other level," van Wyck says, referring to a Tennessee Williams quote he included in describing the deb party: "America has only three cities: New York, San Francisco and New Orleans. Everywhere else is Cleveland."

YEARS IN THE MAKING

The van Wycks started the company in 1999 after Bronson had graduated college and worked as a protocol aide to Ambassador Pamela Harriman in Paris, in charge of running her nightly diplomatic receptions.

He was working as a set designer at Paramount Pictures in Hollywood when he called his mother in a funk. The job was losing its luster. Well, she asked, what would you rather be doing right now? "Throwing a party," he answered. She said, well, let's figure out how to make money doing that.

That's how Van Wyck & Van Wyck came to be, one fabulous party after another.

In the book's preface, van Wyck writes: "What is it that we do? Actually, nothing revolutionary. We are taking part in a tradition as old as man, using the same tools to create the same feelings of welcome, of being appreciated, of being taken care of, and of being loved. We help people host people, and, in that way, it is the most valid of enterprises — helping people make other people feel good."

The company has grown into a big employer, with about 47 full-time workers and another 90 or so contractors, such as carpenters, seamstresses and painters.

One funny story from the book details how van Wyck needed a piece to complete a party in an out of the way location up north. The piece he wanted was stored in Tuckerman, so he hauled it from Arkansas and back again when the party was over.

"You can store everything you need in a barn there, and it costs a lot of money to store things in Los Angeles and New York. So, it's nice to have it right in the center. I mean, Fred Smith knew what he was doing when he put ­FedEx right smack in the middle of the country! So we just followed his lead." 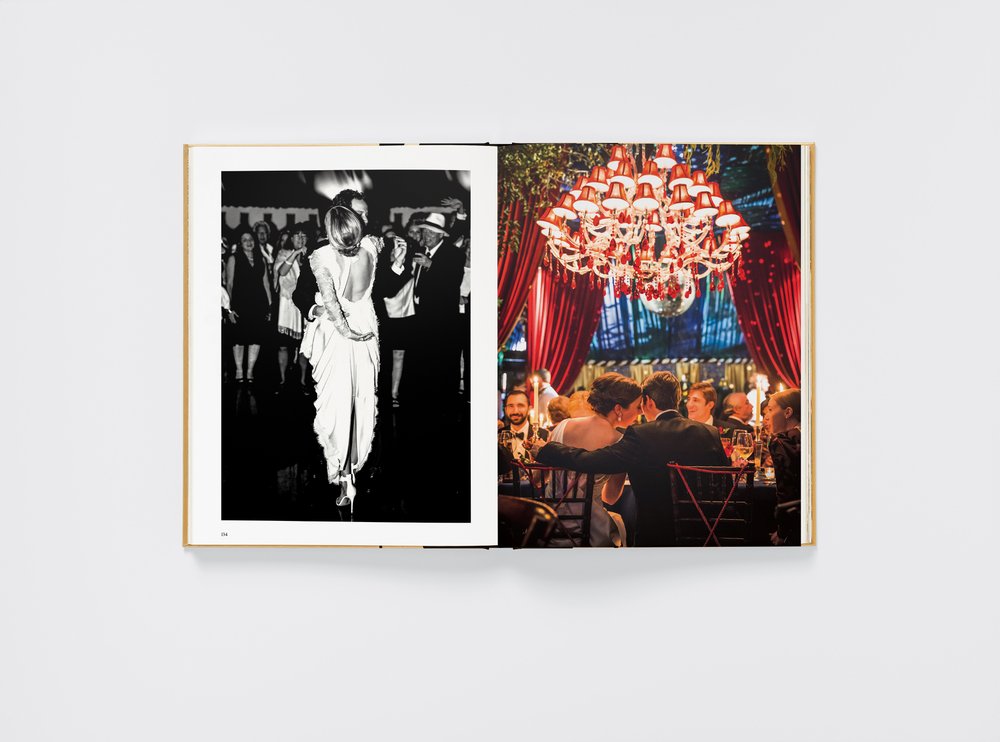 A spread in the colorful book shows the first dance of Alessandra Brawn and Jon Neidich (left). On the right, a couple in Bluffton, S.C., enjoy their wedding dinner. Bronson van Wyck handled both wedding parties. Andreas Waldschuetz took the photo on the left; Brian Wedge took the one on the right. (Photo via Phaidon Press Limited)

"Do whatever you can to nourish hospitality, because it's the basis of civilization."

Van Wyck makes clear in the book that no party is perfect until every guest is pleased. He writes, "Every twenty minutes or so, make sure there's something new added to the mix. What do I mean? Change the music. Dim the lights, or turn them off altogether. Serve the next course of the meal. Give a toast. Finish the toasts. Pass the tequila or jello shots. ... You get the idea."

Also, van Wyck stresses the importance of making guests feel welcome. Again, he uses his knowledge of history to illustrate a point.

"The best story about Queen Victoria, I think, that's not in there that didn't work [in the book] is ... the emperor of Abyssinia, which is now Ethiopia, came to London and she had a dinner and they're at a big long table and she's there with the princes and the dukes and prime minister and people in the government, and the emperor is there with his people and they're in the robes and headdresses and you know, you couldn't have come up with a more different group of people. And they had finger bowls with rose petals in them at the place settings which, you know, is to dip your fingers to wash your hands before you start the meal. Well, the emperor didn't know what this was, and he picked his up and he thought he was supposed to drink it," van Wyck says.

He says the other royals and proper Englishmen looked on in horror at the emperor's poor manners. "And Queen Victoria at the other end of the table, picks up her finger bowl and starts drinking out of it and all the way down the row all the English people had to do what their queen had done. She did the thing that was going to make the guest not be embarrassed."

That, van Wyck says, is a lesson in hospitality from history that holds true today.

In the book, van Wyck advises hosts — and other guests — to "pick out the loser in the room" and make him feel like he's important to the party.

NOT THE FINAL CHAPTER

Born to Party is not a complete wrap-up of the van Wycks' party profession. There's a lot more to come.

As he mentioned before, he and Cat are off to Europe this week. He'll next be in the state April 2 to speak to the Little Rock Garden Club at a fundraiser. There may be other book-related events to come before then. Winter is coming, and New York tends to lose its party momentum, sending van Wyck and his faithful companion to warmer climates to work and play. There's always a party somewhere.

The company's client list is very impressive, including the likes Barneys New York, New Orleans Saints, Sotheby's, Vera Wang, Mercedes Benz and hundreds more, and forthcoming clients are equally impressive. For the Super Bowl, van Wyck is doing the NFL party as well as one for the host team, the Miami Dolphins. Those are in Miami, a welcome respite from the arctic blasts of New York.

Along the way, van Wyck will no doubt end up in Arkansas, socializing in Little Rock or relaxing in Tuckerman with his family and the critters.

"I feel that deep love of where I came from. And whether the pace is, you know, slower or faster, you just feel like you're at home. And, you know, the people in Arkansas are so loving and welcoming. I grew up there. It's home."