U.S., China slam each other at summit 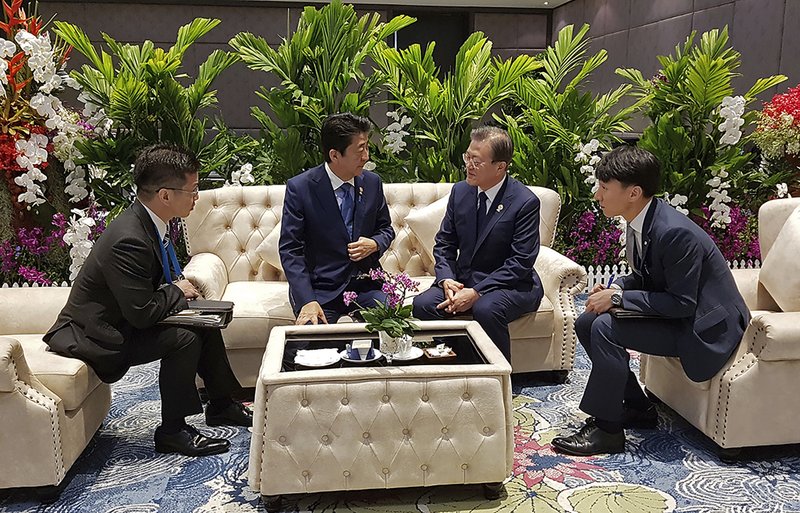 NONTHABURI, Thailand -- The rivalry between the United States and China over influence in the Asia-Pacific region was on show Monday as the two superpowers traded barbs over freedom of navigation in the region's seas.

The war of words took place at the annual summit of leaders of the Association of Southeast Asian Nations, hosted this year by Thailand. The meeting allows Southeast Asian leaders to deal as a bloc with the world's major powers, leveraging their influence in making security and trade arrangements.

At the same time, the meeting highlighted the rivalry between the U.S. and China, which both seek to strengthen their clout in the geopolitically important region.

On Friday the two countries repeated familiar accusations -- Beijing accusing Washington of interfering in Asian affairs, and Washington accusing Beijing of violating the law of the sea and encroaching on the natural resources of other countries.

Washington, however, found itself handicapped as President Donald Trump did not attend the meeting, sending in his place his recently appointed national security adviser, Robert O'Brien.

American officials, fearing a boycott, urged all Southeast Asian heads of state to attend Monday's meeting. But the leaders decided to send only Thai Prime Minister Prayuth Chan-ocha as host, the Vietnamese prime minister as host of next year's summit and the leader of Laos, who oversees Association of Southeast Asian Nations-U.S. relations, a Southeast Asian diplomat said on condition of anonymity because he lacked authorization to discuss the issue.

During the meeting, O'Brien read a letter from Trump, who invited Asian leaders to a "special summit" in the U.S. early next year.

O'Brien at a news conference denied that he regarded the meeting as a snub, saying he "only experienced very, very gracious and generous hospitality and meetings from all the leaders here, ASEAN and other leaders in the Indo-Pacific." He declared that he "had a great set of meetings and didn't feel like there was anything at all untoward."

China's aggressive territorial claims over the South China Sea is a major concern of four Southeast Asian nations with competing claims -- Brunei, Malaysia, the Philippines and Vietnam. Taiwan is also involved in a long-simmering territorial conflict in the busy waters, a key waterway for global commerce. Dwarfed by China's military, rival claimant states have looked at the U.S. as a counterweight to the Asian powerhouse.

O'Brien took a swipe at China, saying Beijing was using intimidation to try to stop Asian nations from exploiting their offshore resources, blocking access to $2.5 trillion in oil and gas reserves alone.

China has long warned Washington not to interfere in territorial disputes it regards as a purely Asian issue. It opposes naval and aerial patrols by the U.S. and its allies in the disputed waters, but American forces have maintained their presence and continued "freedom of navigation" missions designed to challenge China's vast territorial claims.

Chinese Premier Li said he was confident that a regional code of maritime conduct that China is negotiating with Association of Southeast Asian Nations states could be concluded in three years.

Responding to a question about O'Brien's comments, he told reporters: "Regretfully, while the tree desires tranquility, the wind keeps blowing. Some nonregional countries have done everything to make trouble and raise tensions. They want to impose their will on our countries."

O'Brien delivered a retort to Li, saying, "We don't believe that any country should just seal off massive portions of the Pacific Ocean and claim that their territorial waters like it's a lake, like it's a lake up in Lake Tahoe, an island in the middle of the U.S."

The other major issue tackled by association leaders resulted in progress after seven years of negotiations for a free-trade deal called the Regional Comprehensive Economic Partnership. However, India, facing fierce domestic opposition to its market-opening requirements, has dropped out.

The partnership, which does not include the U.S., aims to level trade barriers between association members and six other countries in a bloc encompassing roughly a third of all global trade.

Information for this article was contributed by Kiko Rosario, Jerry Harmer, Elaine Kurtenbach and Johnson Lai of The Associated Press.

Print Headline: U.S., China slam each other at summit