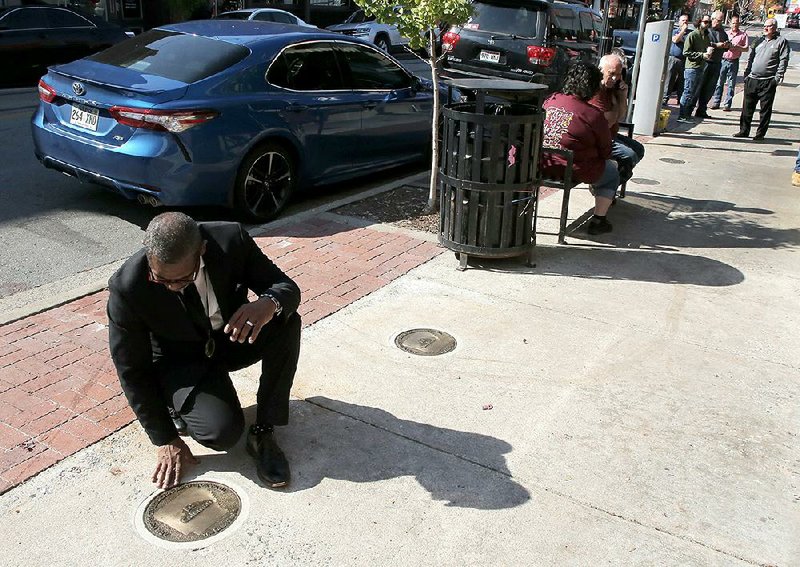 The Rev. Steven Bradley, a descendant of Ed Coleman, one of 12 black Phillips County sharecroppers wrongfully convicted of murder after a shooting that led to the bloody Elaine Massacre in 1919, kneels by Coleman’s marker Tuesday in Little Rock during an Arkansas Civil Rights Heritage Trail commemoration ceremony. Markers in honor of each of the sharecroppers were installed on the north sidewalk of President Clinton Avenue between Cumberland and Rock streets. More photos at arkansasonline.com/116massacre/ ( John Sykes Jr.)

U.S. Rep. French Hill, Little Rock Mayor Frank Scott, Phillips County Quorum Court member Lenora Marshall and others gathered at the University of Arkansas at Little Rock's downtown center to recognize the 12 black sharecroppers from Phillips County who were wrongfully convicted of murder in 1919 after the Elaine Massacre, the deadliest racial confrontation in Arkansas history.

Four descendants of the Elaine 12 received medallions recognizing their ancestors as part of the ceremony, which included the installation of markers honoring each of the sharecroppers. The markers were installed on the north sidewalk of President Clinton Avenue, between Cumberland and Rock streets.

Numerous events looking back at the Elaine Massacre have been held throughout the state since September, the month in which the massacre began 100 years ago. Among them were the Elaine Massacre Memorial, dedicated Sept. 29 in Court Square Park in Helena-West Helena, and symposiums on the massacre earlier that month in Fayetteville and Little Rock.

[Video not showing up above? Click here to watch » https://www.youtube.com/watch?v=t0AQG9aHNAc]

"It is important that, by telling the stories of those who lived through the incredible violence in the summer of 1919, we seek to know, to understand and to learn from what is now all of our story," said UALR Chancellor Christine Drale.

More than 200 black sharecroppers and families in and around Elaine were attacked and killed by white mobs in 1919 as part of what historians often refer to as the Red Summer. A shooting that occurred at a meeting of the Progressive Farmers and Household Union at a church escalated into mob violence that resulted in the death, torture and arrests of hundreds of black residents.

Kwami Abdul-Bey, co-convener of the Arkansas Peace and Justice Memorial Movement, described the massacre as possibly the bloodiest racial conflict in U.S. history.

"Without sanctuary or refuge, black sharecroppers were left with few options," he said. "Many hid in the swamp and thickets, and others were gunned down in the fields as they worked. Throngs of others surrendered themselves to authorities for arrests."

After extensive legal battles, the convictions of six of the Elaine 12 were overturned in a landmark Supreme Court ruling, Moore v. Dempsey, in 1923. All 12 eventually were freed.

"This means everything to the people of Elaine," said Marshall, an Elaine resident. "It's a tremendous move because there has been a gag order for far too long on the people of Elaine. Everyone was afraid to talk about it. Hopefully this diminishes that fear factor."

Lisa Hicks, another Elaine resident and a relative of Frank and Ed Hicks, said the massacre was talked about so rarely in the town that she learned about it from a book.

"When I read it I couldn't believe it, that something like this could happen in my town," she said. "If you read the fliers or the newspaper back then, it told sharecroppers to go home, keep quiet and go back to work.

"If you see the bodies of 200 people still in the streets, then you are going to keep quiet. Generations of people have kept quiet."

Shelia Walker, a Delaware resident and the granddaughter of Albert Giles, said the massacre influenced generations of her family.

"My grandmother, who was traumatized by all this, was never able to be close to her own daughter, her only child, and me, her only grandchild," Walker said. "The massacre did have an effect on my family, and the effect still carries on a generation and another generation later."

Hill, R-Ark., spoke about the importance of recognizing the lives and legacies of the Elaine 12 as well as other victims in that dark chapter in Arkansas history. He spoke in remembrance of the tragedy, as well as recognizing the injustice, resilience and the opportunity for progress over the past 100 years.

Hill quoted remarks by U.S. District Judge Brian Miller as part of his speech before a crowd of more than 50 who attended the event: “Over the last 10 decades harmful acts have often been pressed and overlooked, and mistreatment can turn to bitterness. Whether we are the descendants of the mob, or we are the descendants of those killed by the mob, or whether we are just people of goodwill, we seek reconciliation with one another.”

The Rev. Steven Bradley, a Memphis resident and a descendant of Ed Coleman, said reconciliation isn't always the answer to situations like Elaine.

"We have a come a long way to just bring all of this out of the dirt, because their blood screams from the ground say we deserve dignity, we deserve honor," Bradley said. "I stand before you today to say, 'Reconcile what?' How do we reconcile with people who never accepted us anyway? But the best thing we can do is what we are doing today, and that is to tell the truth."

"The same 200 to 800 who were slaughtered in Arkansas, it's the same edict that is going on right now," he said. "It's the same police officers that are killing our youth unarmed and in their own homes for no reason and no recompense. So I stand before you today to say stand up to injustice, stand up to the oppressive, stand up to tyranny."

Scott spoke along the same lines, encouraging people to use the past to learn how to fight current injustices.

"We thank our ancestors for what they have done," Scott said. "We acknowledge them, we respect them, but we give our firm commitment that it will never happen again.

"How do we do this? We do this by understanding that each of us now going forward have to commit to equity. Equity in education, equity in housing, equity in health care, and even more importantly equity in economic opportunity. As we understand that we will have this equity, it will propel us to our desired future, which brings us all together."

The Arkansas Civil Rights Heritage Trail begins on the sidewalk in front of the Old State House Convention Center on Markham Street and will eventually extend to the William J. Clinton Presidential Center and Park, Drale said. Each honoree's name is commemorated with a 12-inch bronze marker on the trail and a biography on the trail's website, arkansascivilrightsheritage.org.

The trail was created by the Anderson Institute on Race and Ethnicity in 2011 to acknowledge the sacrifices and achievements of those who fought for racial and ethnic justice in Arkansas. Last year, it was named a part of the U.S. Civil Rights Trail.

Brian Mitchell, an assistant history professor at UALR, has been one of the leading forces behind getting markers placed along the trail. Mitchell said UALR students have done extensive research on the Elaine Massacre, and their work helped transform it from something nobody talked about to one of the most searched massacres in history.

The ceremony was an important step, Mitchell said.

"These projects tell our history," he said. "I hate when people categorize history into black history or white history. This is Arkansas history." 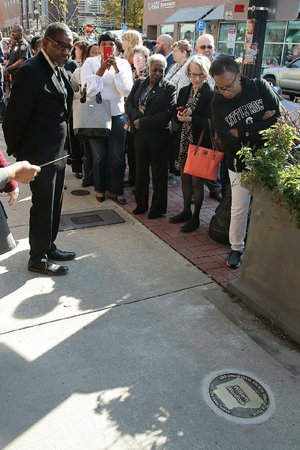 Photo by John Sykes Jr.
Steven Bradley (left), an Elaine 12 descendant, and others attend the University of Arkansas at Little Rock’s annual Arkansas Civil Rights Heritage Trail induction ceremony Tuesday in Little Rock. Embedded circular markers were unveiled on the sidewalk in the River Market area commemorating the 12 exonerated defendants from the 1919 Elaine Massacre. More photos are available at arkansasonline.com/116massacre/

CORRECTION: U.S. Rep. French Hill quoted remarks by U.S. District Judge Brian Miller as part of his speech Tuesday at a ceremony recognizing the Elaine 12 in Little Rock. The quote was mistakenly attributed to Hill in an earlier version of this story. The quote read: “Over the last 10 decades harmful acts have often been pressed and overlooked, and mistreatment can turn to bitterness. Whether we are the descendants of the mob, or we are the descendants of those killed by the mob, or whether we are just people of goodwill, we seek reconciliation with one another.”