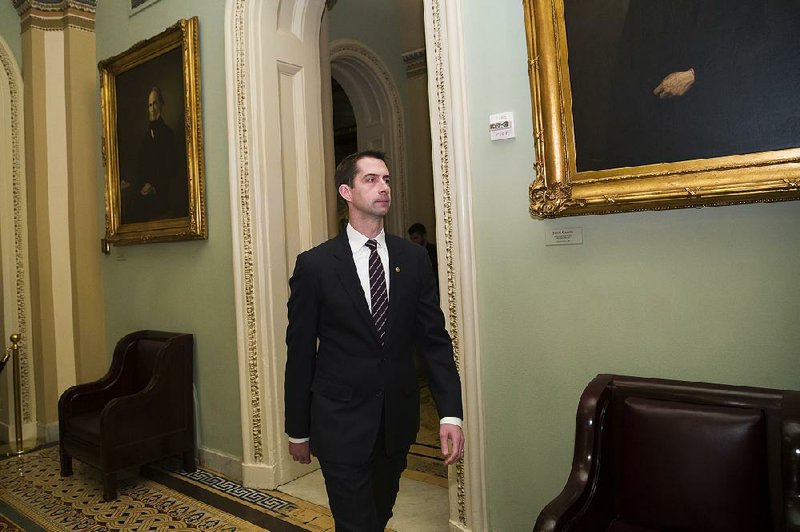 WASHINGTON -- If Mexico doesn't do more to protect American citizens when they're south of our border, the U.S. government may need to intervene militarily, U.S. Sen. Tom Cotton, R-Ark., told Fox News on Tuesday.

His comments came hours after President Donald Trump offered, via Twitter, to help Mexico "wage WAR on the drug cartels and wipe them off the face of the earth."

Both men were responding to the murder of nine people with dual citizenship in Mexico and the United States.

During an interview with Fox News' Neil Cavuto, the lawmaker from Dardanelle repeatedly raised the possibility that armed intervention would be required.

"Unfortunately, it's plain that the Mexican government can't handle this. President [Andres Manuel] Lopez Obrador came into office almost a year ago saying that his strategy for dealing with the cartels was going to be more hugs, not bullets. That may work in a children's fairy tale, but in the real world, when three American women and six American children were gunned down and burned alive, the only thing that can counteract bullets is more and bigger bullets," Cotton said.

The killings, Cotton said are a "reminder of just how important it is to secure our border."

The U.S. wants to work with Mexico, Cotton said. But if things don't improve, a U.S. incursion across the nation's southern border may be necessary, he said.

"If the Mexican government can't protect Americans inside of Mexico, then America may have to take matters into our own hands. We showed that we can do it last week in Syria [with the raid on Islamic State leader Abu Bakr al-Baghdadi]. We showed eight years ago that we can do it in Pakistan during the Osama bin Laden raid," Cotton said. "This is only 50 miles away from our southern border. We can certainly defend American citizens inside of Mexico if Mexico is not willing or able to do so."

In a telephone interview after Cotton spoke, Democratic U.S. Senate candidate Joshua Mahony of Fayetteville cautioned against "taking matters into our own hands."

Instead, the U.S. should "work with Mexico to make sure that any citizen from the United States traveling there is safe and does not have to worry about violence coming to them from organized crime or drug trafficking or anything related to that," he said.

"I think that we need to approach this as a partnership," Mahony said. "There's a constructive way to do this."

Terence Garrett, a professor in the Public Affairs and Security Studies Department at the University of Texas Rio Grande Valley, warned that unilateral military action by the U.S. would come at a cost.

"Mexico would never accept any US intervention into Mexico. It would likely result in a war," he wrote in an email.

Mexico's government declared war on the drug cartel in 2006. Since then, violent crime has soared and the flow of drugs has continued.

"The problem for the US today is not 'Mexico' despite what some politicos are saying. The real problem is US illegal drug consumption which destabilizes the entire western hemisphere," Garrett wrote.