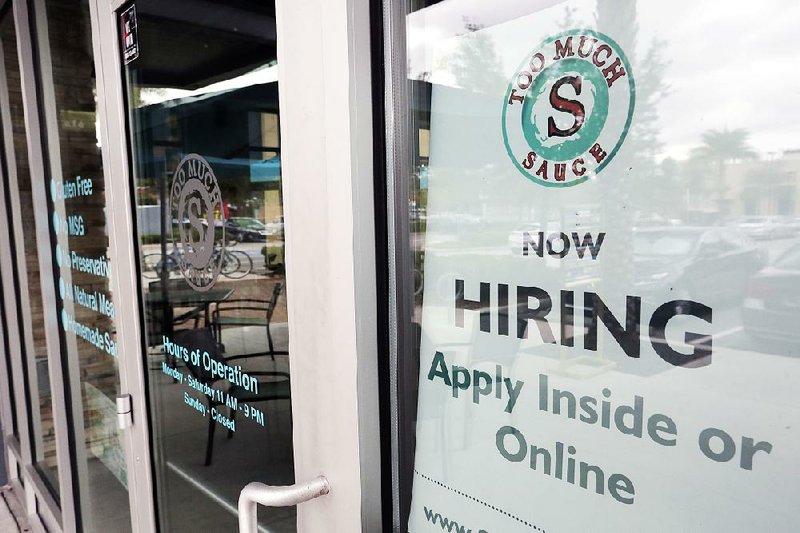 Nationally in September, there were fewer “help wanted” signs like this one in a restaurant Monday in Orlando, Fla., the Labor Department said.

The Labor Department said Tuesday that employers listed 7 million jobs, down from 7.3 million in August. Job openings peaked at 7.6 million in November and have slowly declined since.

The number of openings for state and local government rose in September to 622,000, a record in figures since 2000.

Even with the decline, the total for vacancies exceeded the number of unemployed Americans by more than 1 million.

Overall hiring increased in September, while the number of Americans quitting their jobs fell to a three-month low of 2.3%, though still suggesting workers remain generally confident about job prospects.

The drop in openings reflected declines in retail, health care, professional and business services and construction, while all four regions of the U.S. saw declines.

Despite the decline in openings and the number of people quitting, the report suggests the job market broadly remains healthy. The number of unemployed workers has also fallen in the past several months, leaving 1.2 open jobs, on average, for every unemployed person.

The figures come after the government reported Friday that U.S. businesses and other employers added 128,000 jobs in October. That figure would have been even higher if roughly 50,000 General Motors workers hadn't been on strike. Job gains in previous months were also revised upward. The unemployment rate rose slightly to 3.6%.

The Friday jobs report reassured many economists that the U.S. economy is likely to keep expanding at a modest pace. As long as businesses are still optimistic enough about their outlook to add jobs, that should bolster consumer confidence and spending and propel the economy.

Many business executives have expressed concern about slowing global growth and the fallout of the U.S.-China trade war. But those concerns appear to be fading a bit.

The Federal Reserve said last week that it expects the economy to keep expanding, and signaled that it will likely keep short-term rates steady at its next meeting in December, after cutting them three straight times.

Tuesday's report, known as the Job Openings and Labor Turnover survey, showed that 5.9 million Americans found jobs in September, the second-highest figure in the nearly 19-year history of the report and only slightly below the record reached in July.

That figure represents overall hiring, while the data from last Friday's jobs report is a net figure, which subtracts layoffs, quitting and retirements from total hiring.

Although it lags a month behind other Labor Department data, the survey adds context to monthly employment figures by measuring dynamics such as resignations, help-wanted ads and hiring.

Meanwhile, growth in the vast U.S. service sector rebounded in October after sinking to a three-year low in September, causing concern for investors and economists.

The Institute for Supply Management, an association of purchasing managers, reported Tuesday that its service index grew to 54.7% last month, up from 52.6% in September. Any reading above 50 signals growth.

The service sector, which accounts for more than two-thirds of U.S. economic activity, has been expanding for 117 straight months, according to the survey-based institute index.

"We exceeded expectations for the month for the most part," said Anthony Nieves, chair of the institute's non-manufacturing business survey committee.

"We had some good comments from panelists, they were confident about this quarter and going into 2020," Nieves said.

October's rebound comes after September's lackluster report spooked investors and economists. The Dow Jones Industrial Average fell more than 200 points immediately after the institute released its report, though markets did bounce back.

U.S. manufacturing output dropped for the third straight month in October as trade tensions and a slowing global economy took a toll on American factories.

Information for this article was contributed by Christopher Rugaber and Matt Ott of The Associated Press and by William Edwards of Bloomberg News. 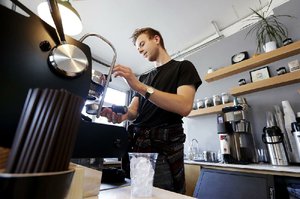