Trump signs off on GIs securing oil land in Syria 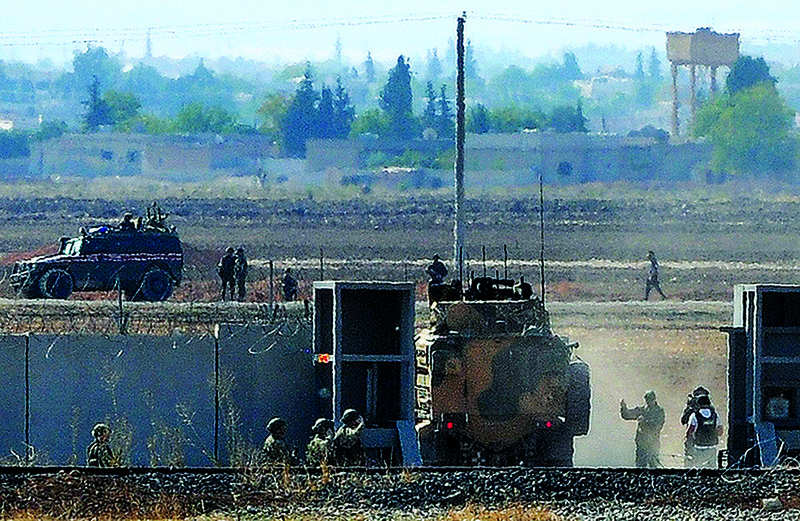 Russian and Turkish forces enter Syria for a joint patrol Tuesday in this photo taken from the outskirts of Suruc in southeastern Turkey. It was the second round of joint patrols for the two countries’ forces.

WASHINGTON -- President Donald Trump has approved an expanded military mission to secure an expanse of oil fields across eastern Syria, raising a number of legal questions about whether U.S. troops can launch strikes against Syrian, Russian or other forces if they threaten the oil, U.S. officials said.

The decision, coming after a meeting Friday between Trump and his defense leaders, locks hundreds of U.S. troops into a more complicated presence in Syria, despite the president's vow to get America out of the war. Under the new plan, troops would protect a section of land controlled by Syrian Kurdish fighters that stretches nearly 90 miles from Deir el-Zour to al-Hassakeh, but its exact size is still being determined.

Officials said many details still have to be worked out. But, Trump's decision hands commanders a victory in their push to remain in the country to prevent any resurgence of the Islamic State, to counter Iran and to partner with the Kurds, who battled the militants alongside the U.S. for several years. But it also forces lawyers in the Pentagon to craft orders for the troops that could see them firing on Syrian government or Russian fighters trying to take back oil facilities that sit within the sovereign nation of Syria.

The officials spoke on condition of anonymity in order to discuss internal deliberations.

"Risking the lives of our troops to guard oil rigs in eastern Syria is not only reckless, it's not legally authorized," Kaine said. "President Trump betrayed our Kurdish allies that have fought alongside American soldiers in the fight to secure a future without [the Islamic State] -- and instead moved our troops to protect oil rigs."

The Pentagon will not say how many troops will remain in Syria for the new mission. Other officials, also speaking on condition of anonymity to discuss ongoing deliberations, suggest that the total number could be at least 800 troops, including the roughly 200 who are at the al-Tanf garrison in southern Syria.

According to officials, lawyers are trying to hammer out details of the military order, which would make clear how far troops will be able to go to keep the oil in the Kurds' control.

The legal authority for U.S. troops going into Syria to fight Islamic State militants was based on the 2001 and 2002 Authorizations for Use of Military Force that said U.S. troops can use all necessary force against those involved in the Sept. 11, 2001, attacks on America and to prevent any future acts of international terrorism. So, legal experts say the U.S. may have grounds to use the authorization to prevent the oil from falling into Islamic State hands.

But protecting the oil from Syria government forces or other entities may be harder to defend.

"The U.S. is not at war with either Syria or Turkey, making the use of the [authorization] a stretch," said Stephen Vladeck, a national security law professor at the University of Texas at Austin.

He added that while the U.S. Constitution bestows significant war powers on the president, those are generally meant to be about self-defense and for the collective defense of the country. Arguing that securing the oil is necessary for national security "just strikes me as a bridge too far," he said.

Members of Congress, including Kaine, have also raised objections to the Trump administration using the military force authorization as a basis for war against a sovereign government. That type of action, he and others have argued, requires approval by Congress.

There were already a couple of hundred U.S. troops around Deir el-Zour, and additional forces with armored vehicles, including Bradley infantry carriers, have begun moving in. Officials have said the total force there could grow to about 500.

Trump, Defense Secretary Mark Esper and other defense leaders have said it's important to protect the oil so that Islamic State militants can't regain control of the area and use the revenue to finance their operations.

Currently, the U.S.-backed Syrian Kurdish forces have controlled the oil, supported by a small contingent of U.S. troops. A quiet arrangement has existed between the Kurds and the Syrian government, whereby Damascus buys the surplus through middlemen in a smuggling operation that has continued despite political differences. The Kurdish-led administration sells crude oil to private refiners, who use primitive homemade refineries to process fuel and diesel, and sell it back to the administration.

Separately, Turkish President Recep Tayyip Erdogan called Tuesday for Russia and the United States to keep to their promises and ensure that Syrian Kurdish fighters pull out of a so-called safe zone along Syria's northern border with Turkey.

In his weekly speech to ruling party legislators, Erdogan said Syrian Kurdish fighters were still present in some of the border areas in northeastern Syria. That's despite two cease-fire agreements -- brokered by the U.S. and Russia -- that halted Turkey's military offensive to allow Kurdish fighters to pull back from the border.

Turkey considers the Kurdish fighters to be terrorists because of their links to Kurdish militants fighting inside Turkey.

"We know that terrorists are present within the limits of the safe zone we have designated with both sides," Erdogan said. "They cannot deceive us by saying 'we have taken the terrorists out of these places, we have cleared them of terrorists.'"

Erdogan also said Turkish troops were being attacked by some Syrian Kurdish fighters from areas they had retreated to, adding that Turkey would not "remain a spectator" to these assaults.

"We will do what is necessary, as we have in the past," Erdogan said, without elaborating.

Erdogan later told reporters that U.S. troops were conducting joint patrols with the Syrian Kurdish fighters, despite the agreement with Turkey.

The state Syrian Arab News Agency reported that Syrian troops took positions along the border with Turkey east of the city of Qamishli toward the Iraqi border. The news agency said troops are now moving east from Qamishli for 38 miles where they are building fortifications.

Turkey has used Syrian opposition fighters, which include former jihadists, as shock troops for much of the fighting. Many of those Turkey-backed forces are made up of Arab and Turkmen fighters from northern and eastern Syria who have an ax to grind against the Kurds and a reputation for violence and looting. There have been concerns in Christian villages about possible atrocities by these Turkey-backed fighters.

Around 200,000 people have been displaced since Turkey began its offensive on Oct. 9.

Information for this article was contributed by Eric Tucker, Robert Burns, Mehmet Guzel, Suzan Fraser and Albert Aji of The Associated Press. 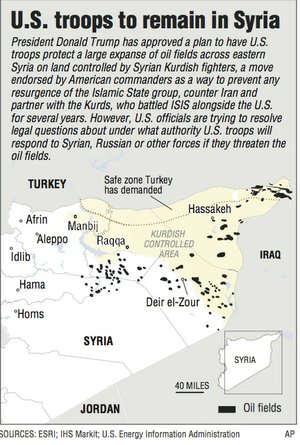 U.S. troops to remain in Syria