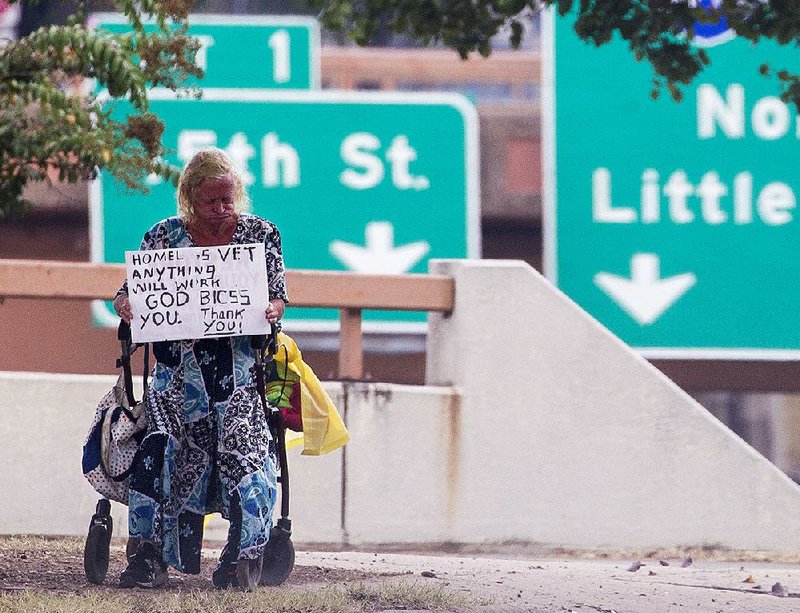 In this file photo a woman who asked not to be identified holds a sign asking for money Wednesday at the Main Street exit of Interstate 630 in Little Rock.

Because a state anti-loitering law applies only to those asking for charity or gifts and doesn't provide a clear reason for singling out that type of expression, it is unconstitutional, a three-judge panel of the 8th U.S. Circuit Court of Appeals in St. Louis said Wednesday.

The panel upheld a Sept. 26, 2017, ruling by U.S. District Judge Billy Roy Wilson in Little Rock, who cited the law's unconstitutionality in prohibiting its enforcement statewide. Wilson ruled in response to a lawsuit filed by two panhandlers that was supported by the American Civil Liberties Union of Arkansas.

But in a dissent, one of the three appellate judges disagreed that Wilson was within his discretion to apply the ban statewide, rather than limiting it to the two men who filed suit.

"Because such broad relief was neither within the courts' power to grant nor justified by its reasoning, I would vacate the portion of the injunction preventing Arkansas police officers from enforcing the law against everyone else," wrote U.S. Circuit Judge David R. Stras of Minneapolis.

The other two judges on the panel were Chief U.S. Circuit Judge Lavenski Smith of Little Rock and Senior U.S. Circuit Judge Michael Melloy of Cedar Rapids, Iowa. They said Wilson didn't abuse his discretion in applying the preliminary injunction statewide, citing his findings that the law is "plainly unconstitutional," that the state's public interest is best served by preventing governmental intrusions into constitutional rights and that preventing the enforcement of a plainly unconstitutional law would cause no injury.

The 8th Circuit ruling was praised by the ACLU of Arkansas.

"Being poor is not a crime, and today's ruling affirms that people have a constitutional right to ask for help," said Holly Dickson, legal director and interim executive director. "On behalf of all our plaintiffs and all Arkansans, we're grateful and relieved that this unconstitutional effort to criminalize poverty has been struck down once and for all."

Rebecca Jeffrey, a spokeswoman for Arkansas Attorney General Leslie Rutledge, whose office appealed Wilson's injunction to the 8th Circuit, said, "The attorney general is disappointed with the 8th Circuit's ruling against Arkansas' commonsense loitering statute that prevents abusive and harassing panhandling practices. She is reviewing for further action."

The state could seek a rehearing by the panel within 14 days and could also ask the entire 8th Circuit to reconsider the matter.

But Dickson said "the law is just so clearly established" that any appeals aren't likely to succeed.

She also noted that the law hasn't been enforced for two years, and, "it seems like our law enforcement has been able to handle any public safety concerns relating to panhandling just fine" by addressing any actual crime occurring in conjunction with panhandling, rather than addressing panhandling itself.

The ACLU first filed a lawsuit over the state's panhandling law in 2016, when it was a crime to "linger or remain in a public place or on the premises of another for the purpose of begging."

On Nov. 22, 2016, Wilson found that version of the law, which had been in place for about 30 years, unconstitutional. That led the Legislature to rewrite the law into the current version that Wilson said still didn't resolve the issue of being a content-based restriction by prohibiting a certain type of speech: begging.

The law, Arkansas Code Annotated 5-71-213 (a)(3), makes it illegal to linger in public or on private property "for the purpose of asking for anything as a charity or gift: (a) in a harassing or threatening manner, (b) in a way likely to cause alarm to another person, or (c) under circumstances that create a traffic hazard or impediment."

Attorneys for the state argued that the rewrite provided a "compelling reason" necessary to justify any First Amendment restriction. They said the compelling reason is the state's interest in public safety and motor vehicle safety, and that the new version of the law furthered that interest in the least intrusive means possible by specifying that begging is illegal only if it is harassing, alarming or threatening, or creates a traffic hazard or driving impediment.

The circuit judges agreed, saying in a majority opinion written by Melloy that despite the state's effort to narrow the application of the law, its current form "is under-inclusive."

"Other types of solicitation (e.g., political or commercial) done 'in a harassing or threatening manner,' 'in a way likely to cause alarm' or 'under circumstances that create a traffic hazard or impediment' are equally dangerous," Melloy wrote.

He continued: "While the Supreme Court has held that 'a legislature may deal with one part of a problem without addressing all of it,' that rule 'has less force when a classification turns on the subject matter of expression.' Thus, a 'regulation cannot discriminate on the basis of content unless there are clear reasons for the distinctions.' Because Arkansas has offered no justification for its decision to single out charitable solicitation from other types of solicitation, the anti-loitering law is under-inclusive and, consequently, not narrowly tailored."

The Hot Springs ordinance outlawed physical interactions between pedestrians and occupants of vehicles, which Dawson said was a content-based restriction on speech, in violation of the First Amendment.

Dickson said those rulings weren't appealed, and that another effort to restrict panhandling in Fort Smith was resolved when the city repealed its ordinance after the ACLU got involved. She said the ACLU takes action on anti-begging laws in response to complaints.

Instead of trying to find ways to stop people from begging, she said, "we need to look for solutions to homelessness and poverty," which are the reasons behind the begging.

Arkansas isn't the only state wrestling with how to combat panhandling without violating the First Amendment.

On Tuesday night in Montgomery, Ala., the City Council rejected a proposal to criminalize the act of handing money or anything else to someone from a car in a road. The Associated Press reported that opponents of the law packed the meeting, many wearing stickers proclaiming "poverty is not a crime."