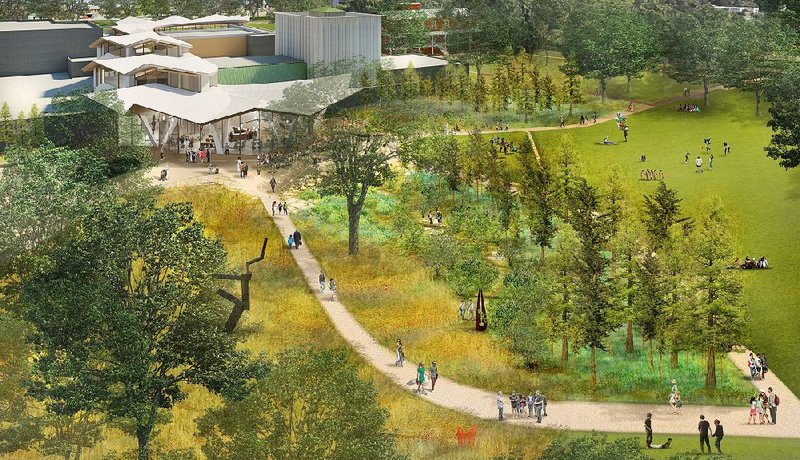 An artist’s rendering gives an aerial view of the re-imagined Arkansas Arts Center that includes a new restaurant with outdoor shaded seating and a great lawn, new pathways and connections to MacArthur Park. Under the plan, a tree canopy will develop on the grounds.

The Arkansas Arts Center's annual showcase of work by regional artists will span both sides of the Arkansas River in 2020 while the downtown Little Rock museum's headquarters is remade, officials said Thursday.

The 62nd annual Delta Exhibition will be split among the Historic Arkansas Museum in Little Rock and the Thea Foundation and nearby Argenta Gallery in downtown North Little Rock. The exhibition will open in June, with specific dates to be announced later, museum spokeswoman Angel Galloway said.

Officials previously expressed optimism that the Delta Exhibition would continue next year and in 2021 while most of the 82-year-old MacArthur Park headquarters is torn down and rebuilt as part of a $128 million makeover, but they had not finalized plans nor disclosed where it might be held.

"It affirms our commitment to the brand of the Delta, which is arguably our signature exhibition, and more importantly, our commitment to engaging the community throughout the [more than] two-year period until we will reopen," chief curator Brian Lang said in a phone interview. "We took this as an opportunity to reimagine the Delta Exhibition."

Confirmation that the exhibition will continue is the latest in a series of piecemeal Arts Center announcements about where people can find the museum's artwork and programs before the Little Rock space opens in 2022.

The museum last year reached an agreement with the Central Arkansas Library System to display about 150 pieces from its craft collection and host programs at branch libraries.

The popular arts school, a major revenue stream, is mostly based at the museum's temporary location in Riverdale.

Staff members are working at the Riverdale site, the former Walmart Neighborhood Market on Cantrell Road, which is open to the public and the site of a temporary gallery focused on the museum's past and future.

"We are closer to figuring that out," Lang said Thursday.

The construction project, planned since 2015, has had some disruptions. Officials canceled the major biennial fundraiser, Tabriz, originally scheduled for last April, to prepare for groundbreaking. And the museum's renowned, delicate collection of drawings and other works on paper is in storage.

Although nothing is "presently in the pipeline," Lang said he would not rule out potential partnerships between the Arts Center and various venues to host other larger-scale exhibitions during the remodeling.

Artists who live or were born in Arkansas or its six neighboring states are eligible to submit work completed within the past two years to the Delta Exhibition. The call for entries will run from Jan. 13 to March 22. A guest juror will choose which work will be displayed and award prizes to winners.

The Arts Center's partners agreed to offer the space for free, and no money will change hands through the agreement, said Galloway, the museum's spokeswoman. Admission to the exhibition will be free, as is the norm.

"It's a high-quality, yet local exhibition that comes around every year, and it's always high-quality," said Will Hogg, curator of the Argenta Gallery and an Arkansas Arts Council board member. "That can be counted on."

"Individuals might make an evening of it, or a day of it ... versus an afternoon single trip," Seevers said.

Consistency in fonts and graphics at the three locations will help tie the displayed work to the wider Delta show, Lang said.

"The works will respond to their own venues, but we will try to draw kind of a consistent look across the venues so that when visitors enter those spaces, they will know they are works in the Delta Exhibition," Lang said.