Trump pushes back on reports U.S. will remove China tariffs 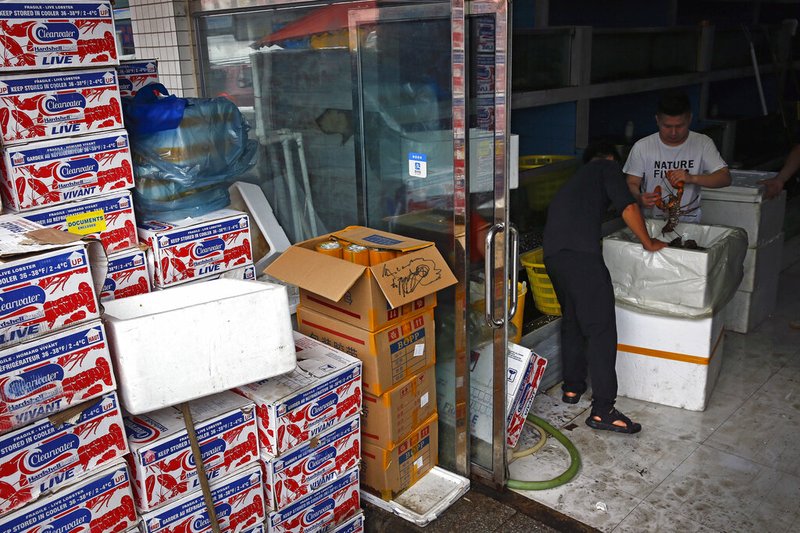 WASHINGTON — President Donald Trump on Friday dismissed a Chinese official's assertion that his administration has agreed to roll back some of the higher tariffs it's imposed on Chinese goods.

The Chinese official said Thursday that the two sides had agreed to a phased cancellation of their tariff hikes as part of an emerging agreement.

Trump's pushback suggested that negotiations haven't progressed as far as hoped as the world's two biggest economies struggle to negotiate an end to their trade war, which has hurt both economies.

"They'd like to have a rollback," Trump told reporters at the White House, referring to the Chinese. "I haven't agreed to anything."

The two sides have been working on an initial "Phase 1" deal that was announced Oct. 12 but that still isn't final.

Financial markets in the U.S. and globally rallied Thursday at the prospect of an agreement to wind down the U.S.-China trade fight, but then fell Friday on Trump's comments. The Dow Jones industrial average dropped 48 points, or 0.2%, in midday trading.

Trump repeated his claims that China wants a deal more than the United States and that the United States benefits from extra tariff revenue. The president says the tariffs are paid by China, but studies conducted since the duties were imposed find that Americans businesses and consumers are paying them.

"Frankly, they want to make a deal a lot more than I do," Trump said. "I'm very happy right now. We're taking in billions of dollars."

A private sector source with knowledge of the talks said Thursday that the United States has agreed to suspend the duties Trump threatened to impose December 15th on about $160 billion of Chinese imports as part of the agreement. But there is dissension in the White House about whether and by how much to roll back 15% duties on another $112 billion of goods imposed Sept. 1.

Larry Kudlow also told Bloomberg News Thursday that if a deal was reached, it would include reduced tariffs.

"The White House never speaks with one voice," Mary Lovely, a trade economist at the Peterson Institute for International Economics, said Thursday.

Despite Trump's cavalier comments, analysts say the administration has plenty of incentives to reach a deal soon. Trump said last month that the "Phase 1" pact would include the purchase of tens of billions of dollars of U.S. farm products by China, which would benefit farm states, many of which supported Trump in 2016.

And the Dec. 15 tariffs would mostly hit popular consumer products such as smart phones and laptops. Not only would that also raise consumer costs, but those tariffs would affect many products designed by U.S. companies, for which China gets relatively little of the economic benefit.

"The December tariff round would largely hit products designed and marketed by multinational firms, mostly with components from the United States and its allies, and assembled in non-Chinese-owned factories," Lovely wrote on the Peterson Institute's website .

The trade war stems from the Trump administration's complaints that China is seeking to unfairly boost its high-tech industries by stealing U.S. technology or forcing American companies to share it as a condition of doing business there. Most business groups and China trade experts agree that China has violated trade rules and have largely supported the administration's tougher line.

Still, the tariffs have hurt both countries' economies. China's growth slowed to an annual rate of 6% last month, a healthy pace for more advanced economies but China's slowest in three decades.

In the United States, businesses are dealing with the tariffs' higher costs and are uncertain about their international supply chains. They have responded by cutting their investment spending in new plants and equipment for two straight quarters. That's lowered U.S. economic growth to 1.9% at an annual rate in the July-September quarter from 3.1% in the first three months of this year.

A report released Wednesday by a trade group opposed to the duties found that Americans paid $7.1 billion in tariffs in September, a record high for a single month.

Once a "phase 1" deal is reached, the two sides will still need to decide where the two leaders — Trump and China's Xi Jinping — will sign the pact. Trump said Friday that they could hold a summit in Iowa or elsewhere in U.S. "farm country."