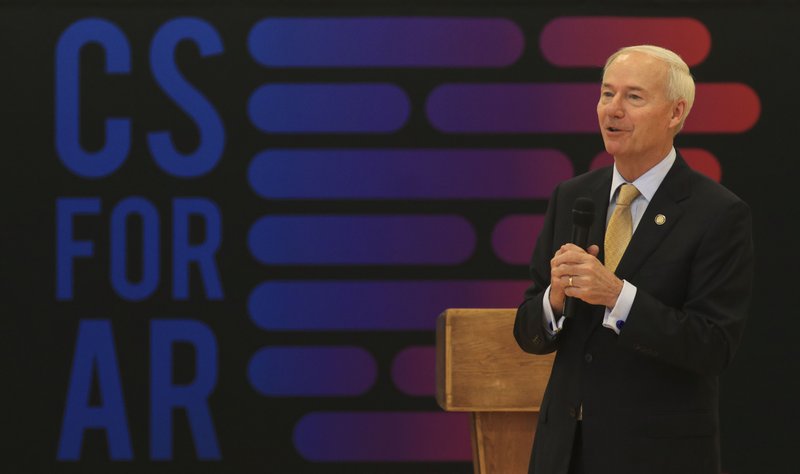 Of Arkansas' more than 1,000 public schools, 175 learned Friday that they will share in $6,700,100 in state reward money for high student performance and/or high achievement gains on the 2019 ACT Aspire exams.

"Awesome, very awesome," said Les Taylor, principal of the Little Rock School District's Wakefield Elementary, in learning of the forthcoming financial award to his campus -- a first for the school in the reward program that dates to 2014.

The Springdale, Little Rock, Bentonville, Conway, Cabot, Greenbrier, Fayetteville, Rogers, Russellville and Pottsville school systems are among districts that have several campuses in line for the funds. Pulaski County Special and North Little Rock each have two recipient campuses.

Gov. Asa Hutchinson and the Arkansas Division of Elementary and Secondary Education announced the recipients of the statutorily authorized rewards for the top 10% highest-performing and top 10% highest-growth schools on the Aspire exams.

The state-mandated Aspire tests are given annually in grades three through 10. The achievement-growth category of the Arkansas School Recognition Program also takes into account high school graduation rates.

Specifically, the top 5% of campuses in achievement or achievement gains will receive $100 per student. Schools identified as being among the 6% to 10% top achievers or academic gainers are to receive $50 per student.

Hutchinson said Friday that he relishes the annual announcement of the schools that are "models of excellence."

"I commend the students and educators for their hard work and focus on achieving high expectations," he said. "They deserve this honor."

The reward money must be used for employee bonuses, equipment and supplies, or for employment of people to help with improving and maintaining student achievement.

A committee made up of a school's principal, a teacher and a parent will decide how to use the money, which this year ranges from $6,000 to more than $90,000 -- depending upon the school's student enrollment.

Little Rock's Wakefield -- one of six Little Rock schools to be rewarded -- will receive $24,200 for being among the top 6% to 10% of schools in achievement growth.

The school -- which has an enrollment of nearly 600, almost all of whom are eligible for free and reduced school meals based on family income -- has been recognized by the University of Arkansas, Fayetteville's Office of Education Policy in recent years for its achievement gains. This is the first time for the school to be a recipient of a state award.

Taylor attributed the success to a hardworking, committed faculty that is a blend of longtime and new teachers.

"My vote would be to reinvest in the teachers," Taylor said. "They are the ones who are investing in our kids and they deserve that for the hard work and effort."

Steven Helmick, principal at Don Roberts, said his school has used some of the reward money in the past for technology purchases. The preponderance, however, has been bonuses for school employees, including teachers who "make the magic" happen for the school's 1,036 pupils, he said, also noting that at close to 5 p.m. on a Friday, the school parking lot was still full of employee cars.

"We have excellent, excellent teachers who work very hard to create engaging classrooms," said Debbie Jones, superintendent of the Bentonville School District. "And we have wonderful families who support education -- who prioritize education -- as an important key to success, and we see that in our students."

"We have set a bar high for ourselves and we expect to achieve this," Valley View Superintendent Bryan Russell said about the recognition. "We work very hard at it. Outstanding teachers and parents are keys to our success. Our students have excellent parents who are highly involved. And we attract the best of the best of teachers in this area. They love working here and they do an outstanding job for our students."

The schools have typically alternated the use of the reward money between supplies and equipment and employee bonuses in the subsequent year, Russell said. This year is likely to be a year for equipment and supplies -- probably in the form of technology, he said.

"We really focus a lot on growth and growing students," LISA Assistant Superintendent Luanne Baroni said. "All of our schools showed academic growth and four of them were in the top 10% in the state."

In the past, schools in the system have used reward money for technology purchases but Superintendent Fatih Bogrek is advocating that it be distributed as bonuses to teachers this year.

"Teachers are the most important actor and factor for student achievement," Bogrek said. 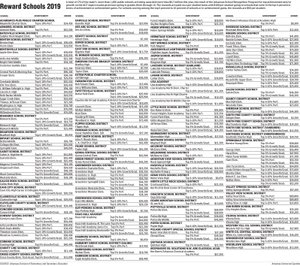