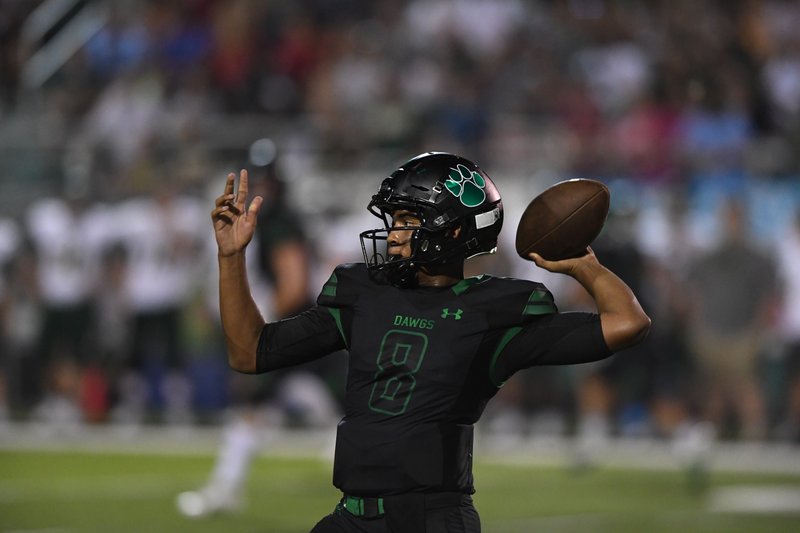 SPRINGDALE -- Gary Phillips solidified his case as the best dual-threat quarterback in the 7A-West Friday night, passing for 153 yards and rushing for another 151, in Van Buren's 31-12 victory over Springdale High at Jarrell Williams Bulldog Stadium.

"Gary is a phenomenal quarterback," first-year Pointer head coach Crosby Tuck said of his junior leader. "On both ends, running the ball and throwing the ball, he is such a weapon for us. Just another great game for him."

"We had to deal with some adversity early in the game, with some missed assignments, offensively," Phillips said. "But the fact that we were able to overcome that and put things together, and put some points on the board, showed that we were ready to play."

Van Buren took advantage of an early gift as Springdale fumbled the ball away on the second play from scrimmage, allowing the Pointers' Devin Swearingen to pounce on it at the Bulldog 25. Chris Flores booted a 37-yard field goal to give Van Buren a 3-0 lead less than two minutes into the game.

Neither offense could get much momentum until Phillips weaved his way to a 50-yard touchdown run to make it 10-0 with 9:28 left in the first half.

Springdale (3-7, 1-6) was then able to capitalize on a Van Buren miscue on the ensuing drive. The Pointers mishandled a Bulldog punt, as Bryndell Cook recovered for Springdale at the Van Buren 20. Four plays later, Darrell Parchman scampered into the end zone to cut the lead to 10-6.

The Pointers were quick out of the gate in the third quarter, needing just over two minutes to drive the ball 64 yards to paydirt. Phillips ran it the final nine for the score.

Springdale was able to get deep into Pointer territory on their next drive, but turned the ball over on downs at the Van Buren 7.

The Pointer offense kept things rolling with a 63-yard, 6-play drive early in the fourth quarter, extending the lead to 24-6 on Brayden Rivas' 31-yard run.

"I felt like we had a terrible start tonight, but was very happy with the second half," Tuck said. "Springdale did a really good job really scheming us up defensively. But I was proud of our guys, from our coaching staff to our players, to be able to communicate some things, and come out and play a much different second half. Once we were able to make those adjustments, we were able to execute some offense."

Lardarius Wonsley hauled in two passes on Springdale's next drive for 63 yards, leading to Gilberto Dominguez's 1-yard touchdown run to cut the lead to 24-12.

Phillips came right back, connecting with Jaiden Henry on a 41-yard hookup on the next drive to get to the Springdale 3. Phillips scored on a keeper the following play to complete the scoring.

"Our coaches do a really good job of reading what the other team is doing, then putting us in a position to take advantage of some things," Phillips said. "This feels good, because we are trying to change the culture in Van Buren, one step at a time. And this is a great way to do it."