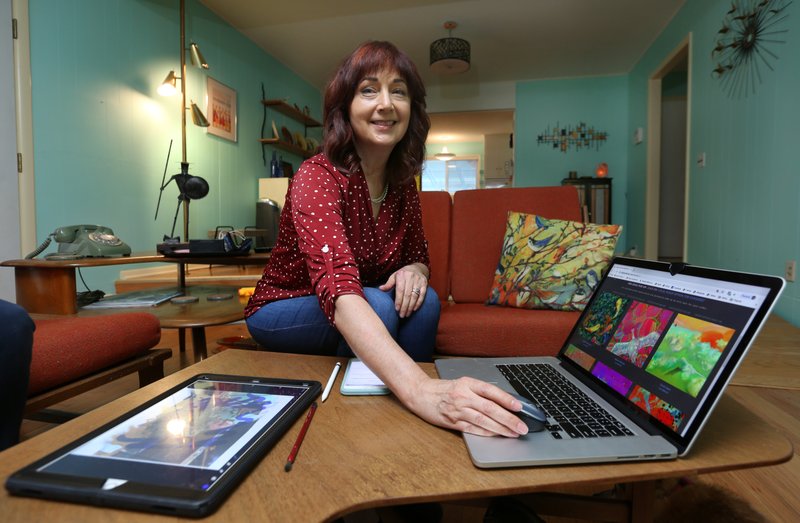 NWA Democrat-Gazette/DAVID GOTTSCHALK Melissa Milton displays her website Tuesday, October 29, 2019, that populated with her new media digital painting at her home in Fayetteville.

FAYETTEVILLE -- Technology and art have a long-standing relationship that evolves as artists discover ways to integrate emerging tools into their creative processes.

The association has always been relevant, said Gerry Snyder, executive director of the University of Arkansas' School of Art.

Technology in art isn't limited to high-tech material and includes any tools used to create, he said.

"You find some pigment, you rub it on a wall, there's the technology in your hand," Snyder said. "It's kind of like how creative can you be with this tool, with this technology, to find uses?"

Art and technology are both naturally exploratory, he said.

He used filmmaking as an example. Video was used primarily by the film and television industries until a portable camera was created making it easier to record outside a studio. 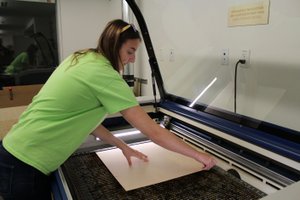 "It didn't stop artists from utilizing that technology," Snyder said, of using video to create art.

New technologies continue to have an impact within the arts, according to the report Creativity Connects: Trends and Conditions Affecting U.S. Artists by the Center for Cultural Innovation for the National Endowment for the Arts.

Better and less expensive technological tools are fundamentally changing how art is made and how much it costs to create, according to the report.

"One of the challenges, but maybe also opportunities to think about, are costs around equipment, exhibiting work and the specific technical needs that some of these works require," Burford said. "That can be a challenge for artists and for institutions." 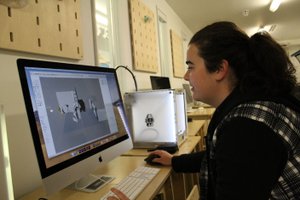 NWA Democrat-Gazette/MARY JORDAN Shelby Fleming, graduate student, uses a computer to scale a sculpture for its projected gallery space in the Advanced Technologies 3D Lab at the University of Arkansas.

The university's Advanced Technologies 3D Lab allows art students to use some of the most advanced tools on the market to integrate technology with their creative processes, said Vincent Edwards, lab instructor and technician.

Tools such as 3D and laser printers simplify some time-consuming practices by allowing students to transform 2D concepts into 3D creations, which can vary in size from an apple to the wooden tables and chairs in the lab.

Edwards said he sees technology creeping into students' work, such as using a 3D printer to make 100 small parts for a project in an hour, rather than making one part by hand during the course of a day.

"It saves people countless hours, but also it really makes things possible that weren't possible before," he said. "You don't always see those results on the surface."

Acadia Kandora, a master of fine arts student, said she uses the laser printer to decrease the potential for error when printmaking with multiple plates.

"I can separate them out and carve them all at the same time and then make sure that they will line up and be precise," she said, explaining each color of a print requires a different plate. "I don't have to worry about lining up blocks that I can't see through in physical space. I can figure that all out digitally."

Shelby Fleming, also a graduate student, uses computer software to ensure her sculptures will fit in a particular space.

"They're very site-specific pieces that need to be a certain measurement," Fleming said. "I've completely modeled the gallery that I'm going to be in, and then I'm able to scale things to the correct size."

The use of technology doesn't remove the creativity from a piece, Edward said.

"We're still using a lot of materials that can be manipulated with traditional tools almost at any point in the process," he said.

The investment in traditional art-making tools is typically longterm for the university, Snyder said.

"The great thing about artists is they can use old tools," he said, adding tools such as hammers have much more longevity than the more advanced technology often offsetting them.

Ensuring students are familiar with the most up-to-date technology for their craft is a costly endeavor, Snyder said.

"The obsolescence of technology happens quicker and quicker," he said, noting the university has to continually update its more advanced tools.

"If you're using a computer from 2015 and you go into an entry-level position as a designer in 2020, you're going to have some learning to do," he said. "It's going to be a disservice to the university to send you out with old-tooled knowledge."

Sometimes, the cost drops as an item becomes mass produced, such as 3D printers, Edwards said.

Technology has made creating art more accessible for Melissa Milton of Fayetteville because of its ease and ability to decrease the cost.

The former lawyer said she discovered a second career as a new media artist when an autonomic nervous system disease called dysautonomia prevented her from working outside her home about three years ago.

"I have to spend most of my waking hours laying down," Milton said. "My mind is so completely functional and active that I was bored out of my mind."

Milton downloaded the computer application Procreate allowing her to digitally paint on her iPad. She said it completely changed how she spends her waking hours.

The app allows her to create colorful abstract digital paintings and to paint over photos she's taken on her iPad using a stylus and paintbrush with special properties for digital painting, Milton said.

Once completed, she uses a giclee printer to put her work directly on canvas, she said. She described giclee as an ink used to print fine art prints on inkjet printers.

"If you printed that up with the kind of dye inks like your office color printer, in two years, it would be like a 30-year-old Polaroid," she said. "The colors would fade and be awful."

Completing the process herself allows Milton to ensure she has a product her client is happy with and allows her to keep production costs down.

Procreate was just $5 when she purchased it, but now costs $9.99 to download, she said. The printer's $3,500 price tag means it will pay for itself after she's sold 12 large prints.

"After that, I have a higher profit margin per canvas," Milton said.

Using digital technology as a medium also allows Milton to save her work as she progresses so she can revert to any stage in the creation process as she adds color to a piece work, she said.

"If it ruins it, so what, because I didn't lose 40 hours worth of painting," she said. "It makes me braver and bolder than I would ever be with real paint."

"It's very cost effective to kind of print on demand," she said. "I don't need a warehouse or a storage room somewhere, which would have to be climate controlled."

The style of her work is evident in the digital imagery she creates, just as it would be for an artist using paints, she said.

"It looks the same," Milton said. "It's my signature."

"I've stood before enough great works of art," Colorusso said. "I want to actually step into it. I want to be part of it."

Almost all of his works involve sound and technology as integral components, he said.

His latest piece, Sound Steps, is no exception.

The prototype of the piece consists of four wooden boxes, but the finished work will include 17 fixed, steel boxes on concrete platforms, Colorusso said. The boxes will range in size from 4-by-4 feet to 1-by-1 foot.

"Each have a section of a composition that gets activated by someone sitting or standing on them," he said. "I'm really trying to encourage people to kind of go somewhere, put their devices away and experience something in real time."

The tops of the boxes are pressure sensitive and activate a small, internal computer called a Raspberry Pi programmed with a selection of the composition, Colorusso said. 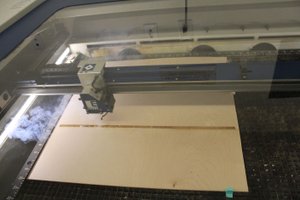 NWA Democrat-Gazette/MARY JORDAN A laser printer is used by Acadia Kandora to cut designs into a piece of wood in the Advanced Technologies 3D Lab at the University of Arkansas.

"The final composition will have mostly guitar, but a little sprinkle of bass clarinet here and there," he said.

The simple concept comes with a hefty price tag and will cost an estimated $100,000 to complete, Colorusso said.

"I'm at a point now where I can't afford to prototype these things," he said. "I need to get funding."

Colorusso received a $7,500 grant through Artists 3 60 to help pay for some of the initial work on Sound Steps, he said.

Artists 3 60 is a three-year pilot program offered by Mid-America Arts Alliance with the support of the Walton Family Foundation providing grants and professional development services to 60 Northwest Arkansas artists by 2021.

Using technology allows him to take his art to the next level, Colorusso said.

"There are certain things you have to do in life to survive and then there's other things that you do to make that survival worthwhile," he said. "What I can do in life is make things that are beautiful and give people the opportunity to have experiences that are awesome."

Technology remains a vehicle for change in the art industry, Snyder said, as artists are able to make items previously created in a specialized factory, he said.

He used the tables designed, printed and built at the lab as an example.

"If you have the skill set and the knowledge, you can make a table, you can package it, you can sell it," he said.

Many students are beginning their education with experiences in technology they can build upon, Edwards said.

"We're seeing kids who are just far more tech savvy, and they understand what a 3D printer is before they show up and see one in my lab," he said.

Having students so well versed in technology is apt to be transformational for the future of art, Edwards said.

"The younger kids are so tech integrated that it's not a leap at all for them to think about this stuff interfacing with the more traditional methods that they're being taught," he said.

How artists will use technology in the future remains to be seen, Fleming said.