The homepage of the interactive website Rohwer Reconstructed: Interpreting Place Through Experience offers a digital reconstruction of the camp.

Thanks to video game digital technology and 3-D visualization software, we can now walk through a barrack at one of Arkansas' Japanese Internment Camps. The camps, at Rohwer and Jerome in southeast Arkansas, were two of the 10 camps where some 117,000 Japanese Americans were held during World War II.

The interactive website Rohwer Reconstructed: Interpreting Place Through Experience (risingabove.cast.uark.edu) allows people to be able to see a digital reconstruction of the camp that gives viewers an idea and experience of how the 8,475 Japanese Americans lived and, under very difficult conditions, preserved their family life and culture as best they could. It also includes an archive showing artwork, letters, a timeline and recordings of internees telling their story.

Rohwer Reconstructed is a collaboration among the Center for Advanced Spatial Technologies, Fay Jones School of Architecture + Design and Special Collections at the University of Arkansas, Fayetteville; the Butler Center for Arkansas Studies in Little Rock; and Arkansas State University at Jonesboro. It was made possible by grants from the Japanese American Confinement Sites program, administered through the National Park Service to the University of Arkansas.

"The website has taken about five years to get going," says Joshua C. Youngblood, Research and Outreach Services Librarian, Special Collections, University of Arkansas Libraries, Fayetteville. "The project team created the interactive landscape by combining hundreds of photographs and historical documents to create the camp on the website."

For librarians like Youngblood, who have hung onto data, photographs and personal histories for decades, their collections can be archived online. He says, "It changes how we share the data, and the information is only a few keystrokes away and available to everyone.

"Federal grants make these projects possible. We are very excited to get to the Jerome project," which Youngblood estimates will take about three years to complete. 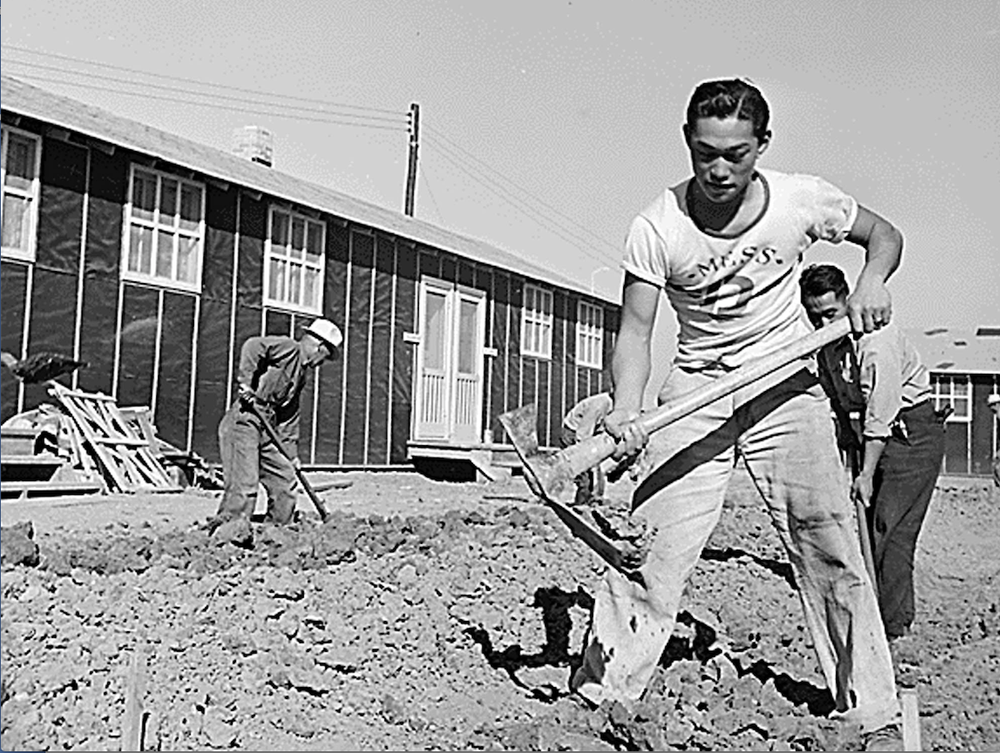 Japanese American men dig a drainage ditch near the barracks at Rohwer Relocation Camp in 1942. (AP)

Rohwer Reconstructed and the site in development for the Jerome camp are among the latest in a series of developments that have heightened interest in the Arkansas camps.

Grant money is paying for a two-day conference next weekend, titled "Arkansas Stories of Captivity and Resistance." It will be held at various locations throughout southeast Arkansas. Admission to the conference is free, but the public must register in advance online. For information and reservations, visit arkansasonline.com/1110conference.

Erdman and Barnes will present lectures, a Japanese dinner will be served at the McGehee Municipal Complex in McGehee, the work of Rohwer native and artist John Newman will be shown and Richard Yada, who was born at the Rohwer camp in 1943, will lead a trip to the site. 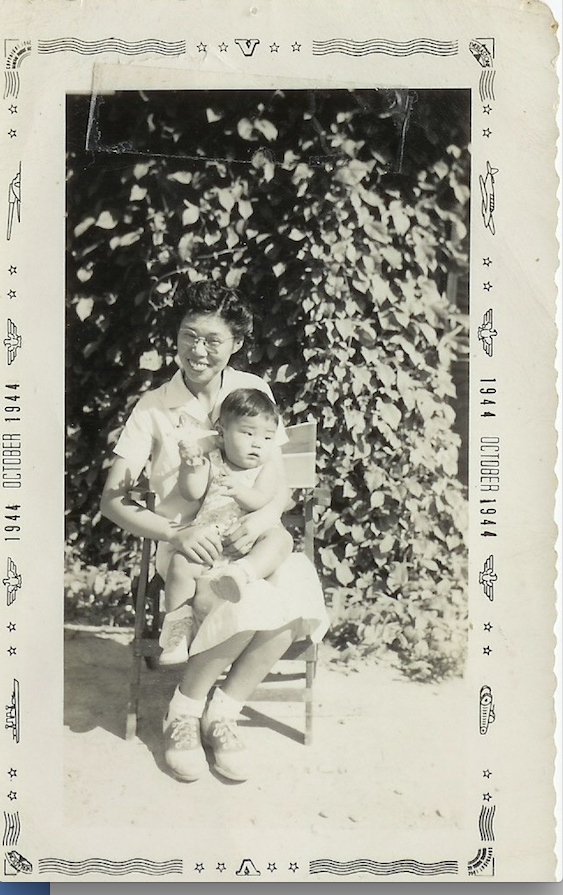 The presentations will rely on folktales, art, literature and historical documents to explore the camps from familiar angles, as well as new ones such as the intersection of the camps and minorities during the Jim Crow era, Sexton says.

"It moves beyond victimhood narratives to engage with how each group navigated and resisted these forms of captivity," and ultimately, the university's goal "is to raise general public awareness about this sad and tragic story."

"There have been waves of interest in the camps and I think we're experiencing one, but it has a different feel," Youngblood says.

"This time, there is an urgent need to get individual stories recorded as many of the former internees near their final years," he says. The 75th anniversary of the end of World War II is next year. 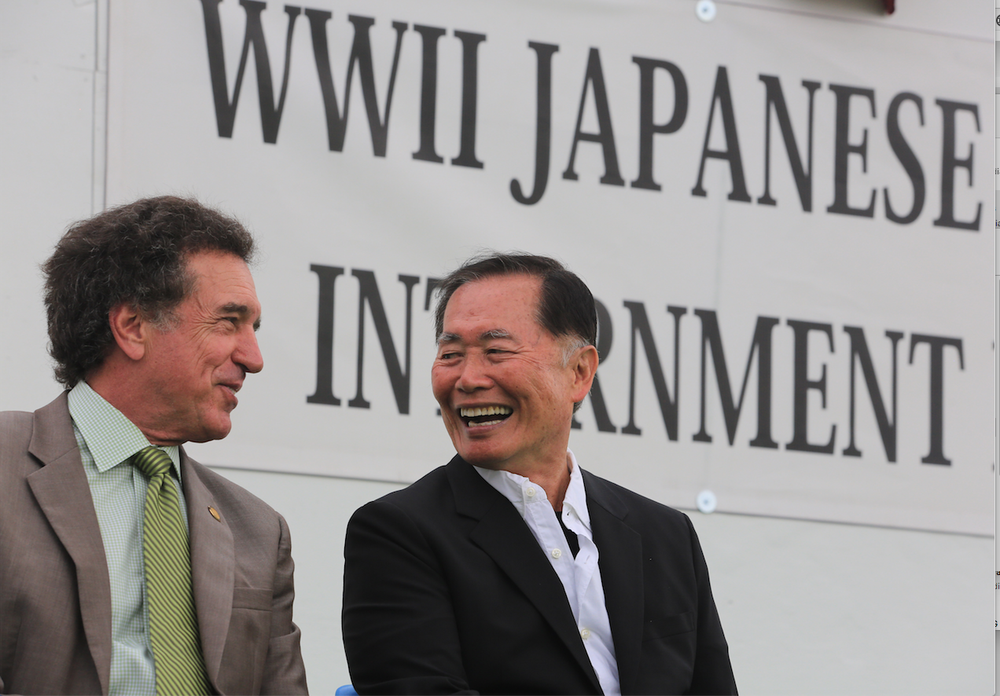 Yada, who lives in Little Rock, is considering writing his family's internment story.

Youngblood believes that "years of activism [by former internees and their families] is reaching a critical mass" and their stories are becoming part of the country's historical fabric.

Without the foresight of a few people, much of Rohwer's history would have been lost, Youngblood says. The preservation of artifacts allows for the telling of "a richer, more personal story."

Mabel Rose Jamison Vogel, who taught high school art at the Rohwer internment camp, held on to a collection of approximately 2,000 pieces of art, including the work of her students and others imprisoned there. 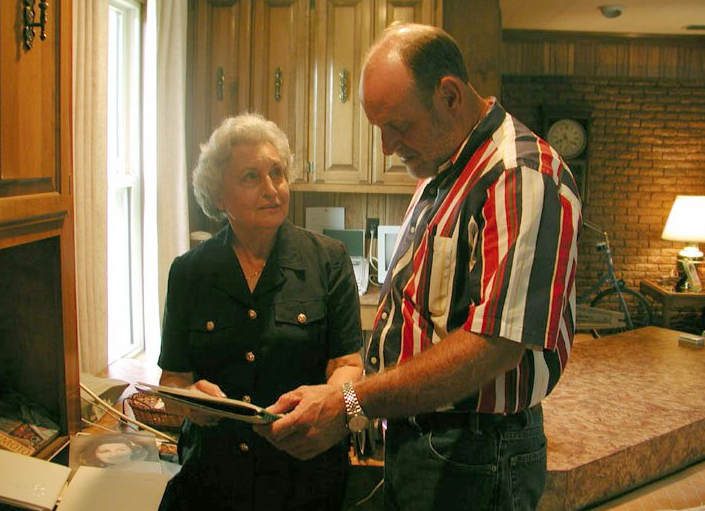 Rosalie Santine Gould and Mark McElroy had active roles in the preservation of art and documents from Rohwer. (Special to the Democrat-Gazette/DEBORAH HORN)

Former McGehee Mayor Rosalie Santine Gould met Vogel, who had just turned 81, in the early 1980s. The women formed a friendship that played a pivotal role in preserving the camp's history.

Upon her death, Vogel willed her collection to Gould. One of her goals was to find a permanent home for the collection. The Smithsonian Institution in Washington wanted it, but Gould refused their reported $1 million offer, preferring to keep it intact and in Arkansas. She donated it to the Butler Center for Arkansas Studies in Little Rock in 2010; it was named the Vogel-Gould Collection.

Gould says part of the agreement with the Butler Center was that the collection would be available to all former internees and their families on demand.

The Butler Center is trying to meet the requests of the returning internees and their families, as well as those interested in viewing the center's Vogel-Gould collection of Rohwer artwork and artifacts housed there, says Heather Zbinden, Butler Center programs coordinator.

The Butler Center has held seven exhibitions from the collection since 2011, including four in-depth exhibits in Concordia Hall in 2017-2018, Zbinden says. But the center doesn't have the space or money for a permanent display.

Yada says internees and their families are leaving disappointed because they can only see part of the collection. He and Gould would like to see an endowment created to support a permanent display.

The Butler Center is aware of the complaints, Zbinden says.

She says the staff tries to make their collection available, even to internees who arrive unannounced.

The collection can also be seen at the Rising Above website, and internees are given the Butler Center's book titled The Art of Living, which features the entire collection, Zbinden says.

"We had the collection photographed and from that, the book was produced. We printed 1,000 copies and have given 801 away [for free]," to returning internees, educators and others. Funds for the book came from a National Park Service grant.

Zbinden says The Butler Center hopes to raise money to showcase some or all portions of the collection permanently.

After the Rohwer camp was closed in 1945, the barracks were removed by the surrounding communities and most were refashioned to suit other needs. 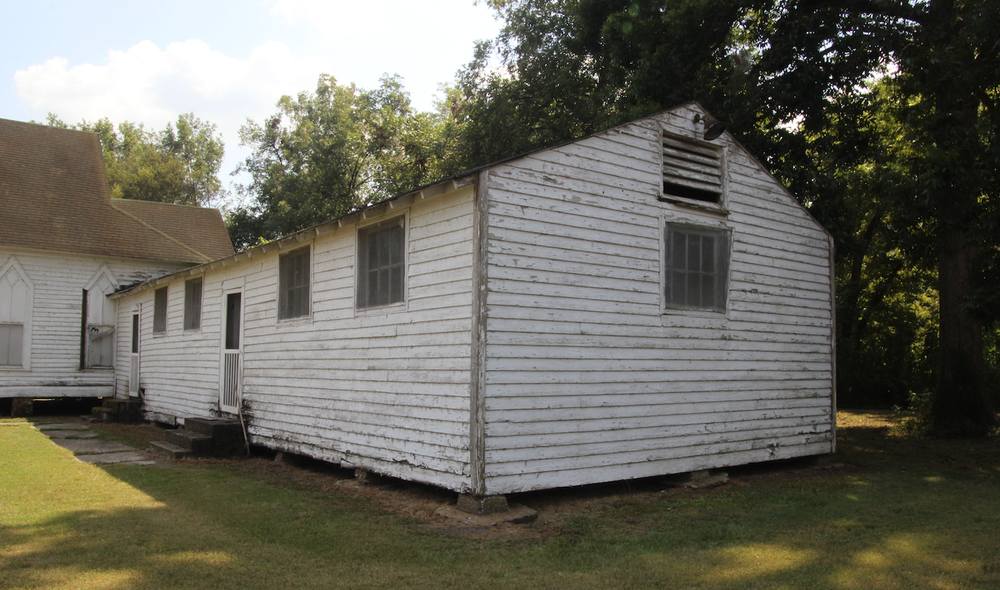 A barrack from Rohwer Internment Camp was used as an annex for a church in Arkansas City. (Special to the Democrat-Gazette/DEBORAH HORN)

Former McGehee Mayor Jack May and Arkansas Highway Commissioner Robert Moore are hoping to raise money to restore an intact half of a barrack, which had been used as an addition to a church in Arkansas City. The barrack now belongs to Desha County.

"People could then walk in and get a feel for the actual conditions of the camp," May says.

At Rohwer, family traditions were lost. One of the more striking, Yada said in the mid-2000s, was the loss of eating together as a family. It was replaced by cafeteria-style dining in a mess hall.

Inside the family's 20-by-20-foot living area, Yada said, there was "a pot-belly stove, Army cots and a few pieces of furniture my dad made out of discarded wooden boxes."

Takei spoke at the museum's opening in 2013 and again at its fifth anniversary. The museum logs about 250 visitors each month, says curator Kay Roberts. In the six years since opening, they've had about 17,000 visitors from 55 countries, with the heaviest concentration from California.

Each year, former internees travel to McGehee to reconnect with one another, and last year, about 200 internees gathered.

Roberts lived near the Rohwer camp but had no idea it existed because it wasn't talked about by locals.

May remembers going inside the Rohwer camp as a child and the impressions stayed with him. One of his reasons for pushing so hard for the museum, he says, is "So the lessons of the past aren't repeated." 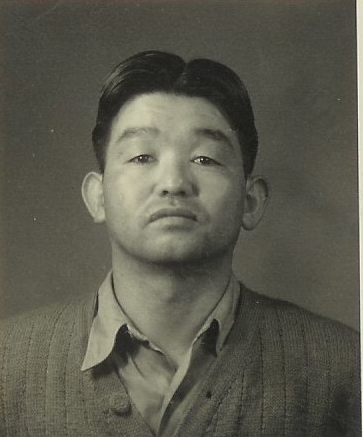 On Nov. 30, 1945, the last Japanese Americans left Rohwer, and at that time, newly freed internee Sam Yutaka Yada, father of Robert and Richard Yada, was nearing 40. He had nothing but had a family to feed. He started over as a row crop farmer at Scott and eventually opened a greenhouse near Protho Junction.

Until his death in 1991, Sam Yada would spend his own money and time maintaining the graves and two monuments, a tank and obelisk that the prisoners had built from wood and concrete before their release.

A third monument was placed by former internees in 1983. "They wanted a permanent monument," Richard Yada says and were concerned the others would crumble one day.

If Sam Yada found a book mentioning the Japanese internment camps, "he would purchase several copies and distribute them to local libraries," Robert Yada says.

After Sam Yada's death, Mark McElroy, who was Desha County Judge, picked up the camp's cause. For a long time, he wasn't sure which government agency owned the property. Originally, it belonged to the War Relocation Authority, but it no longer existed. He contacted various agencies; neither the state nor the federal governments claimed it, he says. McElroy says he was certain it didn't belong to Desha County, though the county maintenance crew kept the lawn mowed, trash picked up and attempted to prevent further damage or vandalism.

McElroy found out the site belonged to the Amanda Adcock Pambianchi Trust and he approached Adcock about donating it to the county. 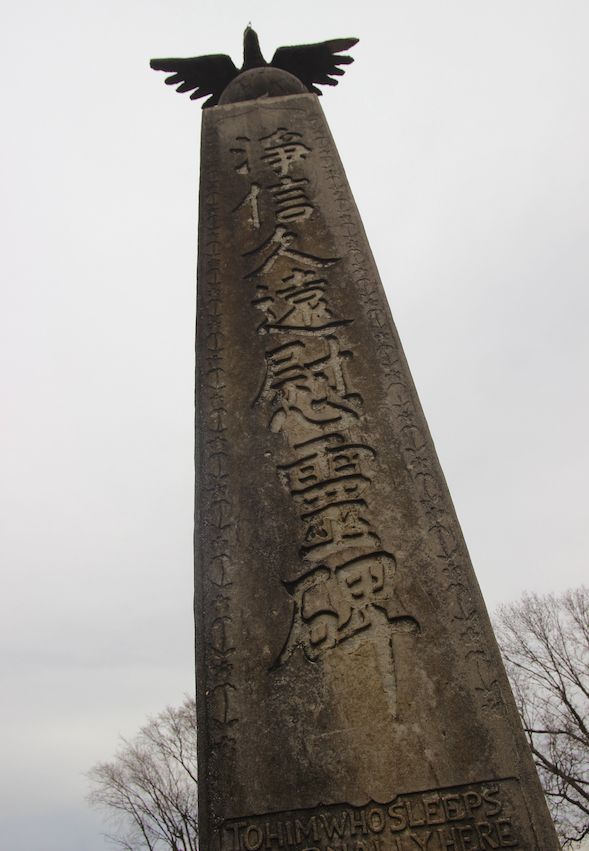 This obelisk is one of the remaining structures at Rohwer. (Special to the Democrat-Gazette/DEBORAH HORN)

Adcock says she didn't realize the monuments and cemetery were part of the property her father, Robert H. Adcock, bought after the camp closed. He also protected the site and welcomed returning internees. Amanda Adcock says she gave it to the county about eight years ago.

In 2006, the U.S. Congress established the Japanese American Confinement Sites grant program, administered by the National Park Service, and funded a restoration of monuments at Rohwer. Both camps were listed on Preserve Arkansas's Most Endangered Places in 2010, Barnes says.

"We're incredibly lucky that the monuments at Rohwer have been restored and that the [Vogel Gould] collection stayed in Arkansas," Zbinden says.

McElroy, who grew up nearby but long after the camps were closed, says, "I felt it was worth saving. It is a sacred place."

-- Ellis Widner contributed to this report.