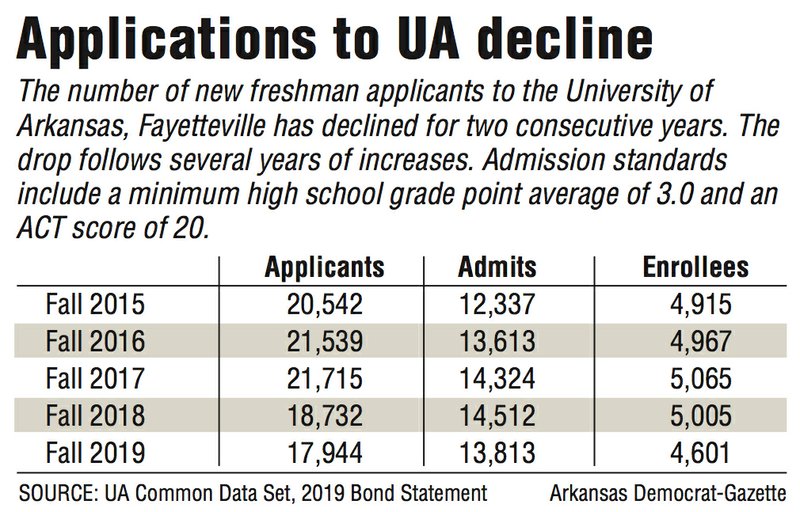 FAYETTEVILLE -- A 17% decline over a two-year period in new freshman applications to the University of Arkansas, Fayetteville mostly can be explained by a dip in out-of-state applicants, said Suzanne McCray, UA's admissions dean.

Each year UA turns away thousands who apply. The trend in declining applications, however, comes as UA this fall, based on preliminary numbers, reported its first dip in enrollment since the 1990s. Total enrollment fell by less than 1%, to 27,559. The incoming freshman class had a larger decline of about 9%, to 4,601 students, after a 1% dip the previous year.

McCray, in an email, called the trend of fewer applications a "blip" and cited an uptick so far in the number of students seeking admission for fall 2020. She said UA recently adjusted a scholarship award for out-of-state students, among other actions taken to counteract what's now a two-year trend of fewer applicants and smaller freshman classes.

"This fall we already have 15,106 submitted applications and it is only Nov. 5," McCray said last week. "The decline last year in applications was mostly out-of-state." She added that "demographics are having some effect."

Most universities in Arkansas reported declining enrollments this fall.

Such declines can cause budget problems -- as tuition dollars make up a greater share of revenue for public university budgets than in years past -- although UA has been able to grow its funds held in reserve, Chancellor Joe Steinmetz said in October.

The university saw growth zoom in recent years with more out-of-state students, many from Texas. A Bloomberg report, citing data from the College Board, stated that from 2007-16, UA had the largest percentage increase in full-time students out of all public "flagship" universities.

About half of all UA freshmen in recent years have been from outside the state.

If there's a softening of student demand, a university "might have to spend more money to get high-quality students to come to campus," said Michael Harris, an associate professor of higher education at Southern Methodist University.

In September, the university announced an influx of $5 million from elsewhere in the school's general fund budget to go to recruitment and scholarships. Steinmetz told trustees in September that "a minimum 85% of it will be earmarked for Arkansas" students, with "a few dollars that we'll use as an attractor for the very best students that are outside" the state.

The UA minimum admission standard, set at a 3.0 high school grade-point average and an ACT score of 20, also applies to out-of-state students.

Students outside Arkansas, depending on their grades and test scores, can receive the New Arkansan Non-Resident Tuition Award Scholarship, which offsets by as much as 90% the difference between more costly out-of-state tuition and in-state tuition. Requirements for the top award were loosened earlier this year, with an ACT of 28 now the minimum instead of a score of 30.

Harris said that rather than simply looking at application totals, it's more meaningful to look at all admissions data, including the percentage of admitted students choosing to enroll.

With UA, there "are not generally trends you would like to see," Harris said.

"I would start asking questions if I were on the faculty of the institution, in the administration of this institution, and make sure we had a handle on what is happening," Harris said, though he added, "I don't think there's necessarily a reason for alarm."

A yearly report about ACT scores shows UA fell from its perch as the top out-of-state choice for Texans taking the college-entrance exam.

The 2019 report released by the ACT organization listed UA behind two schools -- the University of Oklahoma and Oklahoma State University -- when it comes to the out-of-state schools that Texas students listed as wanting to have their scores sent. In the 2018 report, UA ranked first.

McCray cited the change to the New Arkansan Non-Resident Tuition Award Scholarship and also changes in application language as well as a move to join other universities in allowing submissions through what's known as the Common Application.

McCray stated: "We think we have addressed most of the issues (as much as is possible for us to do)."

Harris said winning athletic championships helps a school "get on the radar" of more students. But he said he did not know of research showing any effects from mounting losses.

While several UA sports teams have had success over the past two years, the football team, stretching back to November 2017, has lost 17 consecutive football games against Southeastern Conference opponents.

For prospective students, "more influential is the campus climate and culture of a school," Harris said, adding that culture matters "more so than whether the football team was bowl eligible last year."

Marge Carlson, director of Carlson Admissions, is a Dallas educational consultant who works with students and their families to help them determine a strong college fit.

Carlson said universities provide great academic programs and job opportunities for students. Yet she hears from students how their top choices are influenced by the performance of a school's football team.

"It's disappointing that a student would miss out on these opportunities because their decision for selecting a school would have to do with whether the football team is winning," Carlson said.

Freshman application numbers at similar public universities in neighboring states mostly have increased over the past two years, according to self-reported data from the schools and information published in what is known as the Common Data Set.

Applicants to the University of Kansas increased by about 4% for those seeking to enroll this fall compared to two years earlier. A school spokeswoman said the university had 15,093 applicants for fall 2019.

The University of Oklahoma saw applicants dip by less than 0.5% for those seeking to enroll in fall 2019 compared with two years earlier. The university reported 15,674 applicants for fall 2019.