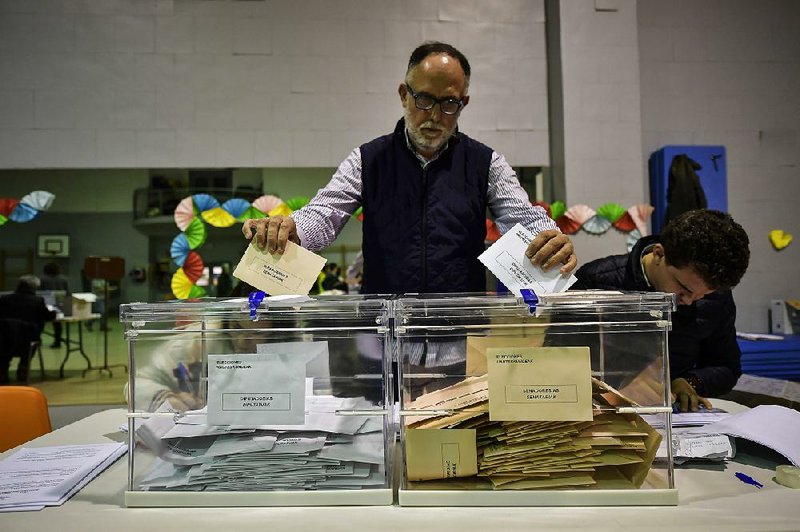 With 99.9% of the votes counted, the Socialists captured 120 seats, down three seats from a previous election in April and still far from the absolute majority of 176 needed to form a government alone.

The big political shift came as right-wing voters flocked to Vox, which had broken into Parliament in the spring for the first time. Sunday's outcome means there likely will be no immediate end to the impasse between forces on the right and the left in Spain, which for most of this year has been unable to agree on the formation of a new government.

The far-right party led by 43-year-old Santiago Abascal, who speaks of "reconquering" Spain in terms that echo the medieval wars between Christian and Moorish forces, rocketed from 24 to 52 seats. That will make Vox the third-leading party in the Congress of Deputies, giving it much more leverage in forming a government and crafting legislation.

With Sunday's outcome, the mainstream conservative Popular Party rebounded from its previous struggles in the April vote, up to 88 seats from 66, a historic low. The far-left United We Can, which had rejected an offer to help the Socialists form a left-wing government over the summer, lost some ground and ended up with 35 seats.

The center-right Citizens party collapsed to 10 seats from 57 in April after its leader, Albert Rivera, refused to help the Socialists form a government and tried to copy some of Vox's hard-line positions.

Sanchez's chances of staying in power still hinge on ultimately winning over the United We Can party and several regional parties, a complicated maneuver that he has been unable to pull off in recent months.

Sanchez called for opponents to be "responsible" and "generous" by allowing a Socialist-led government to remain in charge.

"We extend this call to all the political parties except for those who self-exclude themselves ... and plant the seeds of hate in our democracy," he added.

United We Can leader Pablo Iglesias extended an offer of support to Sanchez.

"These elections have only served for the right to grow stronger and for Spain to have one of the strongest far-right parties in Europe," Iglesias said. "The only way to stop the far-right in Spain is to have a stable government."

Pablo Casado, the leader of the Popular Party, also pledged to work to end months of political instability. He said that "the ball was in the court" of Sanchez, though. In recent months, his party and Citizens have struck deals with Vox to take over some cities and regional governments.

Spain returned to democracy in the late 1970s after a nearly four-decade right-wing dictatorship under the late Gen. Francisco Franco. The country used to take pride in claiming that no far-right group had seats in the national parliament, unlike the rest of Europe. The Socialists' victory in April also was seen by many as a respite for Europe, where right-wing parties had gained much ground.

Vox relied on its anti-migrant message and criticism of laws that protect women from domestic abuse as well as what it considers leftist ideology disguised as political correctness. Still, it does not advocate a break from the European Union in the very pro-EU Spain.

Just as there is no solution to Spain's political deadlock, there appears to be no easy resolution for Catalonia's independence movement. The three Catalan separatist parties won a combined 23 seats on Sunday.

Last month, Spain's Supreme Court sentenced to prison nine Catalan politicians and activists who led a 2017 drive for the region's independence. The ruling triggered daily protests in Catalonia that left more than 500 people injured, roughly half of them police officers, and dozens arrested. More protests by radicals have been called for this week.

Information for this article was contributed by Ciaran Giles, Teresa Medrano, Renata Brito and staff members of The Associated Press. 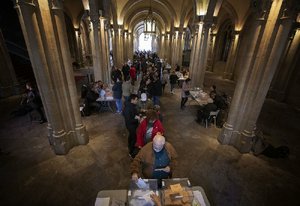 Photo by AP/EMILIO MORENATTI
Voters in Barcelona, Spain, wait to cast their ballots Sunday as the country holds its second general election this year. Preliminary results showed an election victory for Socialist leader Pedro Sanchez, the caretaker prime minister, though the far-right Vox party made big gains. More photos are available at arkansasonline.com/1111spain/.