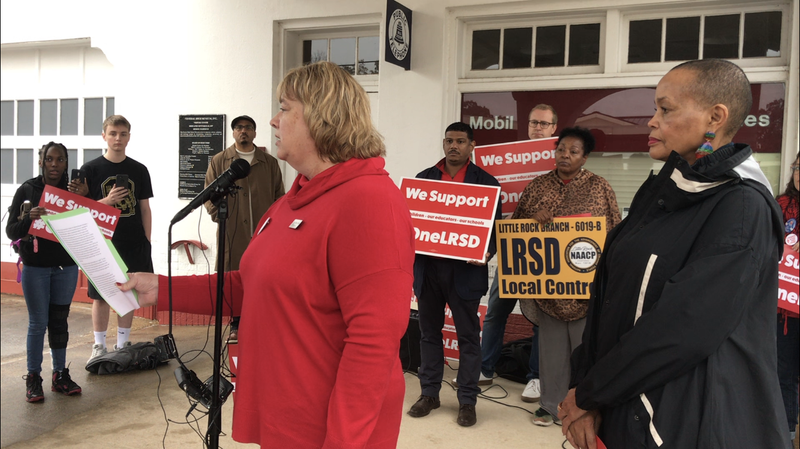 Educators at public schools in Little Rock are planning a one-day strike on Thursday, the Little Rock Education Association and a community group announced on Monday.

Organizers said they want the district to be immediately returned to full local control. The district has been under the control of the state since Jan. 28, 2015, when it removed the elected school board and placed the superintendent under state authority.

In October, the Arkansas Board of Education approved a draft plan for "reconstituting" the 23,000-student district that calls in part for an election of nine local school board members in November 2020, with limited authority. The Education Board also directed the Little Rock district to end its decades-old recognition of the Little Rock Education Association employee union.

The 2018-19 "professional negotiated agreement" between the Little Rock district and the Little Rock Education Association was allowed to expire Oct. 31, at the direction of Education Secretary Johnny Key and the state Education Board, and there will be no successor agreement. However, individual contracts between the district and its employees — with provisions on salaries and benefits — remain in effect through next June 30.

"As educators, we would rather be in our classrooms with our students — not on a picket line," association president Teresa Knapp Gordon said in a statement. "However, this community and the passionate, dedicated educators of this district will do what is necessary to protect the futures of our students."

The strike was announced by the association and #OneLRSD, a coalition that advocates for local control of the district.

Arkansas Department of Education Secretary Johnny Key said in a statement that "more than enough" substitutes and local and state staff members were "prepared to step in to ensure students receive a quality education."

"Every school in the district will remain open, buses will run, lunch will be served, and a safe learning environment will be provided," he said. "At the end of the day, the students in the Little Rock School District deserve a proper education, and we will be ready to ensure that occurs."

Key wrote that he is "deeply disappointed" with the planned strike, which he said "sends the wrong message."

“I’m disappointed in the fact that we’re going to have a work stoppage,” he said.

Teachers are expected to turn in five lesson plans at the start of the school year, Poore said, so he doesn’t expect the strike to disrupt classes. The district will be prepared to combine classes if necessary, however, and principals must be ready to “make decisions on site” as necessary.

The superintendent said that it will be up to educators to determine whether they show up for work on Thursday, and, if they don’t, how they will arrange to miss class.

“If they call in sick and show up on a picket line that’s obviously a problem that we’d have to deal with,” he said

Gordon did not say whether educators would return to work Friday if their demands aren’t met.

“All options are on the table at this point,” she said.

Check back for updates and read Tuesday's Arkansas Democrat-Gazette for full details. This story was originally published at 10:11 a.m.