Alibaba, others rake in $60B in Singles Day online sales by COMPILED BY DEMOCRAT-GAZETTE STAFF WIRE REPORTS | November 12, 2019 at 1:46 a.m. 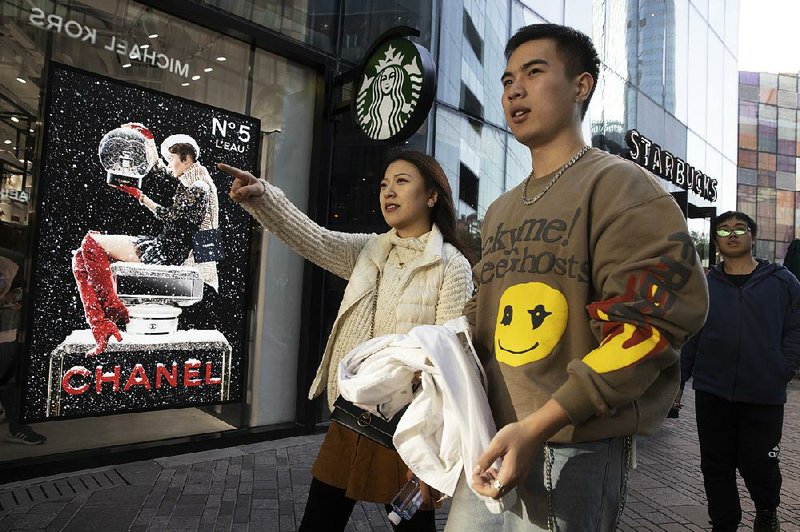 Shoppers scout for bargains at a popular Beijing retail district on Sunday, the eve of Singles Day, a shopping holiday invented in the 1990s that has become the world’s busiest day for online commerce.

The day was a temporary relief to retailers that face fading demand as Chinese consumers tighten their belts, anxious over slowing economic growth and the tariff war with Washington.

University students created Singles Day in the 1990s as an alternative to Valentine's Day for people without romantic partners. Alibaba adopted it as a marketing tool a decade ago.

Rivals including JD.com, China's biggest online direct retailer, and electronics seller Suning joined in. The tactic has caught on in other Asian countries, too.

While Alibaba and its rivals routinely trumpet record sums in the event's aftermath, it's unclear how much Monday's sales actually will contribute to the bottom line given the enormous discounting involved. A good result however could bolster Alibaba's effort to raise as much as $15 billion in a Hong Kong share sale this month, according to people familiar with the matter.

"Overall, we think this year will likely see a more competitive Double 11 period," Ella Ji, an analyst at China Renaissance Holdings, said in a report. "We anticipate each platform will spend more on subsidies."

Singles' Day emerged as a uniquely Chinese antidote to the sentimentality surrounding Valentine's Day. Emerging on college campuses across the country, it takes its name from the way the date is written numerically as 11/11, which resembles "bare branches," a local expression for the unattached.

On Monday, retailers offered discounts on goods from smartphones to craft beer to health care packages.

"Yesterday night, I was browsing past 11 p.m. Many of my friends around me were staying up till 2 a.m. to buy stuff," said Zhu Yirun, a graduate student in Beijing.

Alibaba said sales by merchants on its platforms had risen to $36.5 billion by 11 p.m. after passing last year's full--day total of $30.8 billion before 6 p.m.

An estimated half- -- billion shoppers from China to Russia and Argentina swarmed Alibaba's site to scoop up everything from Apple and Xiaomi gadgets to Ugandan mangoes. The company again hosted a televised entertainment revue in Shanghai to run alongside the bargain-hunting.

Alibaba kicked off festivities Sunday night with a concert by Taylor Swift at a Shanghai stadium.

E-commerce grew rapidly in China because of a lack of traditional retailing networks and government efforts to promote internet use. The country has the biggest online population with more than 800 million web users.

Alibaba, JD.com, Baidu and other internet giants have expanded into consumer finance, entertainment and offline retailing.

Monday was Alibaba's first Singles Day since its founder, Jack Ma, stepped down as chairman in September. He stayed on as a member of the Alibaba Partnership, a 36-member group with the right to nominate a majority of the company's board of directors.

E-commerce has created some of China's biggest fortunes.

Ma, 55, is China's richest entrepreneur with a net worth of $39 billion, according to the Hurun Report, which tracks the country's wealthy.

Chinese online spending is growing faster than total retail sales but also is weakening as economic growth decelerates. Growth declined to a multidecade low of 6% over a year earlier in the quarter ending in September.

Online sales of goods rose 16.8% over a year earlier in the first nine months of 2019 to $825 billion, according to official data. That was more than double the 8.2% growth rate for total consumer spending but down from an average of about 30% in recent years.

E-commerce made up 19.5% of Chinese consumer spending, compared with about 11% of spending for American consumers.

Yang Wei, a migrant worker in Beijing, planned to skip the online rush.

"I feel like the difference [in price] is not that big, and since everyone's buying all at once, the logistics and delivery are slower," Yang said. "I think that it's actually better for me to buy when not everyone's buying."

The 2019 edition came with slight twists to the formula. Alibaba, stung by criticism it harmed the environment by shipping an estimated 1 billion packages in a single day -- has enjoined its logistics arm Cainiao to set up recycling centers at 75,000 locations. It says it will also work with courier companies to pick up used boxes and wrapping.

An expansion into Southeast Asia and less-developed areas in China plus newer services -- such as transactions on food delivery site Ele.me, grocery store chain Hema and travel service Fliggy -- bolstered the total. The company also brought in live-streamers including Kim Kardashian to appeal to younger buyers.

Other aspects remained the same. Singles' Day has always been an opportunity for Alibaba to test the limits of its cloud computing, delivery and payments systems. Leaving little to chance, Alibaba sent teams across the nation ahead of Monday to help outlets prepare for the festival. Some 200,000 brands had been expected to participate in 2019's edition of the festival.

Information for this article was contributed by Joe McDonald of The Associated Press and by Lulu Yilun Chen of Bloomberg News.