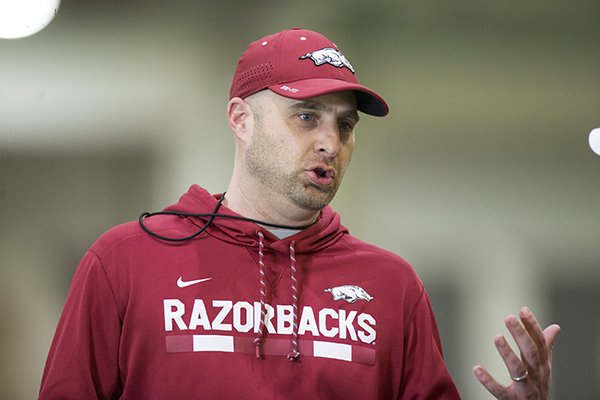 FAYETTEVILLE -- Barry Lunney Jr. didn't have to imagine what the University of Arkansas football players were going through during a meeting Sunday night when he was introduced as the Razorbacks' interim coach after Chad Morris was fired.

Jack Crowe was fired that day -- a day after The Citadel beat Arkansas 10-3 to open the season -- with defensive coordinator Joe Kines being promoted to interim coach. Lunney was a freshman quarterback for the Razorbacks.

"We experienced all the range of emotions that our guys are going through right now," Lunney, Arkansas' tight ends coach and special-teams coordinator, said Monday during a news conference. "Confusion, anger, disappointment, happy, sad, mad, whatever they are.

"I experienced those same feelings, and as I was telling the players, I learned and I saw first-hand what it looked like for a guy that was appointed as an interim coach to come in and right the ship and breathe life into our football players."

Lunney said there is a difference in being made interim coach with two games left -- as is his situation -- and with 10 games left -- as was Kines' situation. But he said the job is still about focusing on the players.

"It's about giving them their best opportunity to succeed these last couple of weeks," Lunney said. "It's all about them.

"As I told them, one of the things that I've gleaned from my experience was, whether you were a senior on that team in 1992 or a freshman, there were some good things that came out of that. Those seniors that were a part of that team in 1992 went on the road to play Tennessee and beat them when they were No. 4 in the country."

Lunney made his first start as quarterback in the Razorbacks' 25-24 victory at Tennessee in 1992.

"Twenty-seven years later people still talk about that game," Lunney said. "The freshman class that was a part of that team, we all know -- the same team that lost their head football coach -- they stuck together, they weathered the storm, and four years later were the bulk of the team that went to the [1995] SEC Championship Game."

"When Joe Kines so famously took over as the coach in 1992, in his press conference, he was asked about being the interim, and he quipped, 'We're all interim,' " Lunney said. "I think he said it best.

Kines, retired from coaching and living in Tuscaloosa, Ala., said Lunney is the right man to lead the Razorbacks in their final two games.

"I think Barry is a good choice -- a wise choice," Kines said. "He's always been an unusual young man. He's been ahead of his time, I guess you'd say, starting at quarterback for us as a freshman like he did."

"Barry was raised by a coach," Kines said. "There's nothing football-wise that's going to shock him or be strange to him, and he's been coaching for a lot of years now himself. So Barry knows what to do."

Arkansas Athletic Director Hunter Yurachek said Lunney, in his seventh year as Razorbacks assistant, was a natural fit to be the interim coach and accepted the job without hesitation.

"He's a Razorback through and through," Yurachek said. "I know I will get Barry's best during the next three weeks, because he loves this football program, he loves this university, he loves this state, and he's invested in what we're trying to do.

"And I know he loves -- he truly loves -- the 120 men he's now leading within our football program."

"Quite honestly, the kids were really excited about coach Lunney," Yurachek said. "He's walked in their footsteps, he understands what they're going through having an interim coach.

"He pointed to that big win over Tennessee. I think he's got them believing we can have some special things happen over the last couple of weeks of this season. He did a great job, I think, energizing our young men under a very difficult set of circumstances."

Yurachek, asked whether he'll be evaluating Lunney as the interim coach, didn't want to put it in those terms.

"But I will tell you, Barry's got a great opportunity over the next two to three weeks," Yurachek said. "And he's already hit the ground running and has been very impressive in his first 24 hours."

Lunney said being Arkansas' coach is his dream job.

Lunney became choked up while talking about Kines, and said he is a role model for how to handle the interim coaching duties.

"I couldn't help but think of Joe Kines and what he went through," Lunney said. "He had some great lines and was always full of energy and excitement.

"I remember how we invigorated our football team that year. I mean, it wasn't perfect. We had some things go bad during that season, but he gave us some hope and he gave us some confidence."

Kines said he felt honored when told of Lunney's comments.

"It's hard to imagine sometimes the different scenarios life can throw at you," Kines said. "But I do think that having gone through it as a player will help Barry with what he has to do now."

Kines was asked what advice he could offer Lunney.

"Just be yourself," Kines said. "You can't do it like somebody else would. You've got to rely on your own instincts and guts.

"Barry will be himself, and he'll do just fine."

Barry Lunney Jr. will be the fourth interim head football coach for the University of Arkansas since the Razorbacks joined the SEC for the 1992 season. Here is a rundown:

2019;Barry Lunney Jr.;Chad Morris;???;First game as head coach will be at LSU