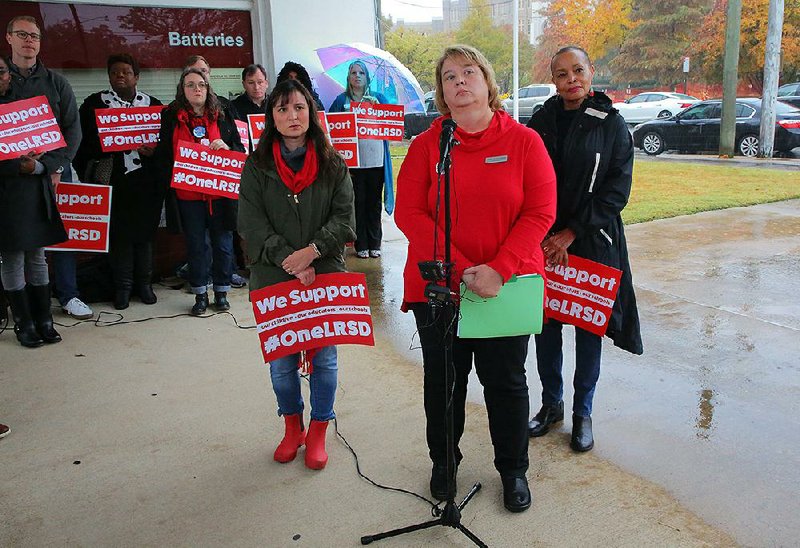 "We have nearly 1,800 members," Teresa Knapp Gordon said at a morning news conference in front of the Central High School National Historic Site.

"I expect every one of them to be on strike," she said.

Gordon invited parents, students and community members to join with striking teachers and support staff -- first on picket lines at the more than 40 schools in the district and then on the state Capitol grounds for the regular monthly meeting of the state Board of Education.

The agenda for Thursday's 10 a.m. Education Board meeting includes multiple items regarding the future governance of the Little Rock district, which has been under state authority -- without a locally elected school board -- since January 2015.

"What we would like to see out of the state board meeting is a motion to return full local control to the Little Rock School District immediately with a board that has full decision-making authority," Gordon said at the news conference, where she was joined by parent and community activists who have become known as #OneLRSD.

Little Rock School District teachers went on strike once before -- in 1987 -- at which time the schools were closed.

Arkansas Education Secretary Johnny Key, who acts in lieu of an elected school board in the district, and Little Rock Superintendent Mike Poore both said later Monday that Little Rock district schools will be open and conduct classes Thursday, despite a strike, for the district's 23,227 pre-kindergarten-through-12th grade students.

Key said in a prepared statement that the district schools are prepared for the work stoppage -- that "more than enough substitutes" and others "have passed background checks and are prepared to step in to ensure students receive a quality education."

Besides the regular school employees who report to work Thursday, the schools will be staffed with as many as 176 district administrators, 132 Arkansas Department of Education staff and hundreds of substitutes provided by WillSub, the vendor that routinely provides substitutes for district hire.

The district has "access" to more than 2,000 WillSub employees, but Poore said the number actually willing or able to work Thursday may be no more than one-fourth of that.

The substitute teachers will use lessons previously prepared by each district teacher for their classes, Poore said. Those lessons were prepared in advance for use when schools must be closed for reasons such as inclement weather or utility breakdowns.

Buses will run and school meals will be provided to students, Poore said about school operations on Thursday. After-school services and activities will continue.

"We are going to try to have as normal a day as we possibly can," Poore said.

Gordon said more details about the strike will be forthcoming today and Wednesday.

While Gordon announced plans only for a one-day, Thursday work stoppage, she did not rule out the possibility of a longer strike.

"No options are off the table at this point," she said in response to questions.

"We will do whatever it takes to stand up for our children," she said repeatedly throughout the news conference.

Gordon said the union membership authorized its leaders more than a month ago to take action -- such as calling for a strike, she said.

The strike is the latest in a series of events that date back to 2015 when the Education Board voted 4-3 to remove the elected school board and place the district's superintendent under state direction because six of the district's then 48 schools were classified as academically distressed for chronicallylow state test results.

State laws have changed in the intervening years and the district is now identified by the state as a "Level 5 -- in need of intensive support." Eight of the district schools have state-issued F letter grades, which are based largely on the annual ACT Aspire exams given in grades three through 10.

Arkansas' nine-member Education Board is obligated by law to either annex, consolidate or reconstitute a district that has been under state control for five years and has not met criteria to exit that state control. Annexing or consolidating a district as large as Little Rock is not considered feasible. Reconstituting a district is largely undefined in state law.

The Education Board hosted public forums in August and September to collect ideas on the Little Rock district's future governance. And, in October, the Education Board approved a plan for a November 2020 election of a nine-member Little Rock School Board -- but one that would have limited authority.

A draft memorandum of understanding detailing those possible limits on the local board is on Thursday's Education Board agenda.

At the same October meeting, the Education Board also voted to end the district's recognition of the Little Rock Education Association as the exclusive contract bargaining agent for district employees.

The Education Board directed that the professional negotiated agreement between the district and the association be allowed to expire, effective Oct. 31, and no successor agreement be enacted. Teachers and support staff, however, will retain their individual contracts -- with salary provisions -- through next June 30.

The three-page draft memorandum on the Education Board's agenda this week states that as long as the district is classified as a Level 5 district in need of intensive support, there will be no recognition of the union as the contract bargaining agent. The draft also says that all decisions related to the district's superintendent are subject to state Education Board approval.

In recent weeks, there have been community meetings, a candlelight vigil, a half-day student sick-out, and a walk-in to schools -- by district employees and some parents and community members -- in support of returning the district as soon as possible to full local control.

Little Rock Mayor Frank Scott Jr. and the city have also become involved in the issue, joining as a partner in some of the planning on the district's future and the operation of its academically struggling schools.

Gordon, who is a district library media specialist on leave from her school job to be the union president, said Monday that the district's educators have a moral imperative to protect students "from those who seek to use them as pawns in their privatization schemes, to destroy public education in our city, our state and our country."

She accused Gov. Asa Hutchinson, Key and the governor's appointed state Board of Education of failing students by not listening to the students, the educators, the parents and the community, and by withholding control of the district "until they are able to destroy it."

Teachers and support staff would prefer to be at work in their schools on Thursday and not on a picket line, she said, but action by educators and community members is necessary to protect a public education system that is beneficial to all students.

"This is a crucial moment in our history," Gordon said. "The governor is trying to silence our voices to prevent us from advocating for the best policy and practices for our students. He will not win," she said.

Hutchinson said in a statement Monday that he was disappointed in the association's decision to "walk out on their students" but that "we will not let a strike stop the education of our students."

"I have said many times, teachers are the critical element for good education inside the classroom. The LRSD has so many great teachers and it is our desire to have them in the classroom, not at home or picketing," Hutchinson said.

Hutchinson also said that "we all desire local control and next year's school board election is a major step approved by the State Board of Education."

Key expressed his disappointment with the strike plan in a statement he issued on a day when state offices were closed in observance of Veterans Day:

"The decision to strike, even for just one day, sends the wrong message to Little Rock School District students, the community, and the state of Arkansas," he said.

"LREA leadership refuses to acknowledge that everything they are asking for may be obtained when the district is no longer in need of Level 5 support," Key continued. "When the need for Level 5 support no longer exists, the local board that will be elected in November 2020 will have full authority to consider their demands. In order to exit Level 5 support, however, students need high-quality educational instruction and support. They can best receive that from the educators who have been hired to do so."

Poore, the state-appointed superintendent who met with reporters Monday afternoon on the plans for conducting classes on Thursday, described himself "as maybe being on the fence" and someone who is working with both sides in the conflict. He also said the strike day is "troublesome" to him.

"We have had a really great start to our school year," he said. "We have done so many things that show we are making a difference with kids on a day-to-day basis," adding that he doesn't want to see those good trends derailed.

He emphasized to employees and the public that the state's memorandum regarding the district is still a draft and not final. The only two restrictions on an incoming school board, he said, will be on hiring of a superintendent and recognizing the union as the exclusive contract bargaining agent.

Poore said the district that employs about 1,800 teachers -- at least 60 percent of whom are tied to the association -- has been preparing for a strike for about a year. That started in 2018 when the state Education Board ultimately voted to suspend Teacher Fair Dismissal Act employment protections in the district. Those protections have recently been restored.

Despite the preparations, the challenge this week is not knowing in advance how many employees will not be at work Thursday, Poore said.

The district earlier announced plans to dramatically increase the daily pay for substitutes during a strike, starting on the second day of the work stoppage.

Poore said it has not been decided whether or how striking employees might be disciplined. In past strikes, there were no terminations, he said, but he also said the district has policies on teacher and student absences that will apply.

Wendy Sheridan, a parent of two children in the district and part of the #OneLRSD coalition of parents and civic leaders, spoke in support of the Little Rock educators at the news conference.

"As a community we have tried our best to speak to the state board, to speak with our governor, to get back local control. This is the next step in that process," she said.

Sheridan said her children will not attend school while district employees are on strike. That's not only because of her support for the full-time employees but also because of concerns of "chaos" that could be the result of inadequate numbers of substitutes who are unfamiliar with the students.

State Sen. Joyce Elliott, D-Little Rock, referenced the nine black students who desegregated the all-white Central High in 1957 in her remarks at the news conference. She said those nine students fought for the best possible education and that fight has continued for all students in subsequent years.

Elliott called on people to go beyond just saying that they care about the situation but actually stand in support with educators and students.

"Please be part of making sure our kids have everything they need," Elliott said. "They need you." 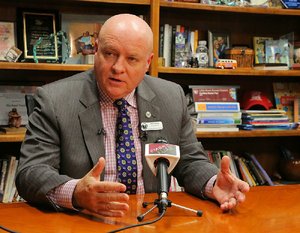