• Rocker Neil Young says he passed the U.S. citizenship test, but he's not legal yet. "I have been told that I must do another test, due to my use of marijuana and how some people who smoke it have exhibited a problem," the Canada native wrote on his website. Young cited an April U.S. policy alert that says, "An applicant who is involved in certain marijuana related activities may lack GMC [good moral character] if found to have violated federal law, even if such activity is not unlawful under applicable state or foreign laws." Young continued, "I sincerely hope I have exhibited good moral character and will be able to vote my conscience on Donald J. Trump and his fellow American candidates, (as yet un-named)." Ever since Trump first started using the singer's 1989 classic "Rockin' in the Free World" at campaign events, Young has criticized him, even though the president has the right to do so, Rolling Stone reported. Young told the Los Angeles Times last month, "I'll be taking the oath of citizenship" shortly after turning 74 today. He's lived roughly two-thirds of his life in the U.S.

• Donald Trump Jr.'s appearance Sunday at a university to talk about his new book on liberals and free speech was marked by an argument between him and the audience over why he would not take questions, the Guardian newspaper reported. Members of the audience of about 450 people at the University of California, Los Angeles, were angry that Trump and his girlfriend, former Fox News personality Kimberly Guilfoyle, declined to take questions because of time constraints, the Guardian reported. Trump was at UCLA to promote his new book Triggered: How The Left Thrives on Hate and Wants to Silence Us. As reported by the Guardian, a number of conservatives -- some in Make America Great Again caps and pro-Trump attire -- began to shout at the president's son and political adviser 20 minutes into an event moderated by Turning Point USA founder Charlie Kirk, after learning a question-and-answer session had been canceled. Video from the event showed a chant that started out as "U-S-A! U-S-A!" turning quickly into angry cries of "Q-and-A! Q-and-A!"The Guardian said that Trump told the audience that taking questions from the floor risked creating soundbites that left-wing social media posters would abuse and distort. Guilfoyle told audience members that they were being rude. Minutes later, Trump Jr. and Guilfoyle stormed off the stage. 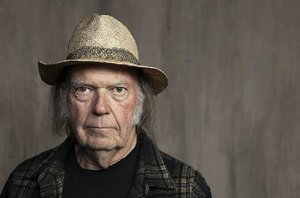 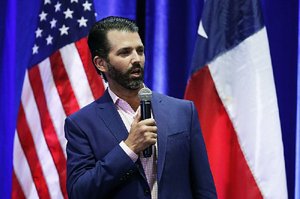