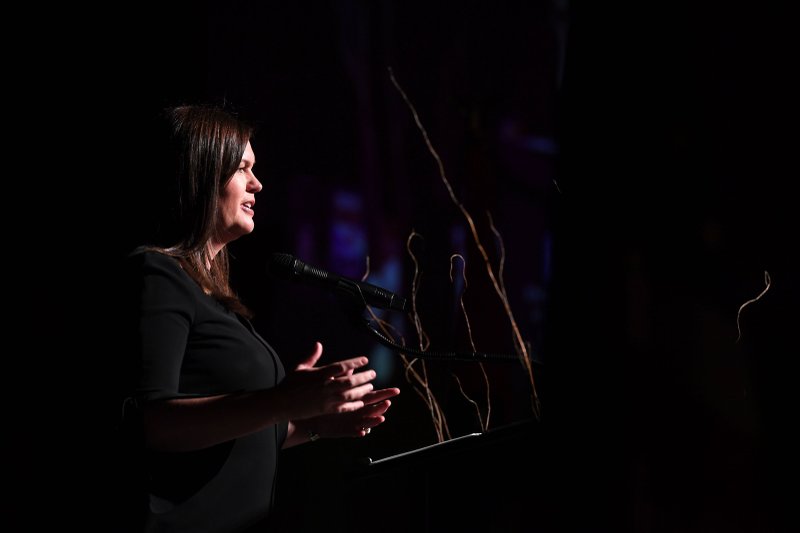 ROGERS -- Sarah Huckabee Sanders paid tribute on Veterans Day to those who have served their country.

"In a world full of really bad guys, they are the really good guys," Sanders said of veterans.

Serving as White House press secretary for President Donald Trump gave her a deep respect for the sacrifices those in the armed forces make along with their families, she said.

She was taken aback when a serviceman in Iraq thanked her and said she had a "tough job," Sanders told a crowd of more than 600 Monday night during the Reagan Day Dinner, an annual fundraiser for the Republicans of Benton County. "Here was somebody putting his life on the line, away from his family every Christmas, telling me I had a tough job," she said. "I politely said thank you, but what I do is nothing compared to what you do."

Sanders worked in the Trump administration from 2017 to earlier this year. Her duties included advising the president, working with lawmakers and corporate executives and accompanying the president on every foreign trip made during her tenure, including top secret trips to visit troops.

Sanders was featured speaker for the dinner. The auditorium was full despite wintry weather. She was greeted with a standing ovation and cheers when she took the podium.

In earlier remarks Sen. John Boozman, R-Ark., recalled that Sanders was his Senate campaign manager and was present at every meeting he had with the president until her departure. He recalled how she would give either man "that look" whenever they veered off track in remarks.

"President Trump and I have something in common," Boozman quipped. "We're both afraid of Sarah Sanders."

Sanders regaled the crowd with stories of taking each of her children to work, proudly describing herself as the "first mom to be White House press secretary." In particular, she recalled the day she took her middle child, Huck, to work and was talking to the president about an event about to take place. Suddenly, the bushes outside the window of the Oval Office started to "shake violently. Then I saw a blond head." Out dashed Huck, then 5 years old, into the window where he pressed his face against the glass. When Sanders informed the president that was her son, he replied "Well, at least he's good looking," according to Sanders.

Trump described Sanders as "irreplaceable," a "warrior" and a "very special person with extraordinary talents, who has done an incredible job," when she left his administration. She served as senior adviser to the president in his 2016 campaign. She spoke to a crowd of 5,000 at Trump's appearance at Northwest Arkansas Regional Airport on Feb. 27, 2016.

On politics Sanders said it was important to stop Democrats from regaining control of the government. She said Democrats wanted to raise taxes and impose government run health care.

"That's a generic attack," Leding said. "They use those because they don't have specific solutions for problems. Democrats propose a range of solutions."

Sanders consults for businesses and charities besides being a commentator for Fox News.