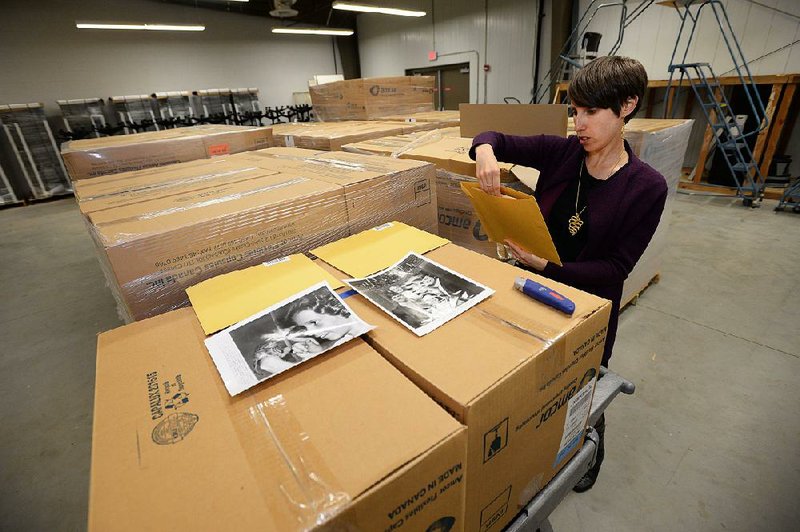 Lori Birrell, head of the Special Collections department at the University of Arkansas library, shows a few of the New York Post photographs that were donated to the campus in Fayetteville.

FAYETTEVILLE -- More than a million photographs and negatives spanning the 20th century arrived at the University of Arkansas in Fayetteville last month.

Dennis T. Clark, dean of libraries, said the trove is the New York Post's photo archive, which contains a few photos dating back to the 1860s.

Clark said the archive was donated in 2017, but the university didn't take possession of 1.38 million items until early October, when two trucks carrying the 1,492 boxes of photos and negatives arrived on campus.

Clark said the unsolicited gift came from a donor who wished to remain anonymous. Clark said the Post sold the archive a few years ago.

Many of the photos in the archive have been digitized by Getty Images.

"Our understanding is pretty much the entire collection is shared with Getty, so they have the license," Clark said. "We don't have anything to do with those images. These are strictly to some extent the original artifacts."

Clark said it will take years for the university to process all the photos and open the archive to researchers.

"It's not typically something you'd find at the University of Arkansas, but we're fortunate to have the opportunity," he said. "Fundamentally, we're really focused on Arkansas and the region and things that matter to Arkansans. But sometimes this kind of thing comes over the transom. The university accepted it and it's our job to figure out how to manage it."

Lori Birrell, head of the Special Collections department at the UA library, said the donation will draw attention to the university.

"It shows that the university is interested in really having a national and international presence, and I think this collection, based on the documentation that I've seen, certainly represents a wide variety of subjects and people from a lot of different backgrounds and locations," she said.

After the archive is processed and opened to the public, Birrell said the university can provide images from the archive for research purposes, but not for publication. That would require permission of the copyright holder, which in many cases could be the Post.

The university has no plans at this point to digitize any of the images.

"It's changed a little since then," Clark said.

Clark said he didn't know if any photograph related to that story was in the archive at the university. 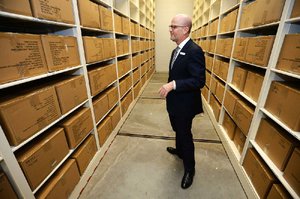 Photo by Andy Shupe
Dennis T. Clark, dean of the University of Arkansas Libraries, walks among boxes from the New York Post photograph archive in the Library Storage Annex on the campus in Fayetteville. The 1.38 million-item collection was donated to the university in 2017 and arrived on campus in October.