Public impeach sessions to start by Compiled by Democrat-Gazette staff from wire reports | November 13, 2019 at 7:13 a.m. 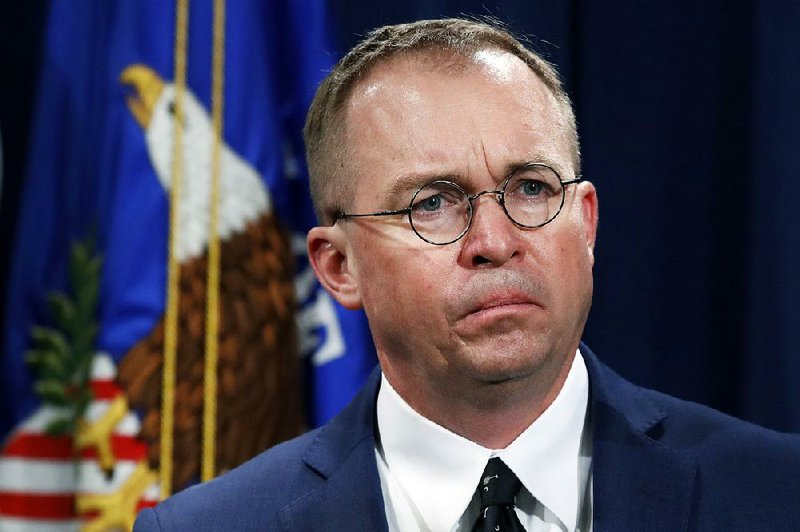 In this July 11, 2018, file photo Mick Mulvaney, the acting White House chief of staff, listens during a news conference at the Department of Justice in Washington.

WASHINGTON -- The day before public testimony begins in the House impeachment inquiry, Mick Mulvaney, the acting White House chief of staff, reversed gears Tuesday and said he would follow President Donald Trump's order to defy a House subpoena and refuse to testify, rather than seek a judge's ruling.

"After further consideration, Mr. Mulvaney does not intend to pursue litigation regarding the deposition subpoena issued to him by the U.S. House of Representatives," his lawyers said in a notice filed in court. "Rather, he will rely on the direction of the president" and government lawyers "in not appearing for the relevant deposition."

While other current administration officials have either obeyed the president's order not to cooperate with the House or defied Trump and testified anyway, Mulvaney had sought a third route by seeking to join an existing lawsuit asking a court what he should do.

The plaintiff in that existing lawsuit, Charles Kupperman, who served as a deputy to John Bolton when Bolton was the president's national security adviser, fought Mulvaney's attempt to be added to the litigation.

After a judge indicated Monday that he was inclined to side with Kupperman to keep Mulvaney out of the suit, Mulvaney withdrew his request and said he would file a lawsuit of his own. Then he changed his mind again.

Mulvaney has become a key figure in the House impeachment inquiry, which begins public hearings today. He carried out the president's order to suspend $391 million in security aid to Ukraine at the same time Trump asked Ukrainian President Volodymyr Zelenskiy in a July 25 phone call to investigate former Vice President Joe Biden and his son, and interference in the 2016 U.S. elections.

Mulvaney last month publicly acknowledged that Trump held up the security aid in part to force Ukraine to investigate a theory about Ukraine aiding Democrats in the 2016 presidential election. Mulvaney later walked back his comments.

House Democrats have argued that Mulvaney can't claim a presidential immunity to refuse to testify about matters that he was willing to discuss in the White House briefing room.

The House can vote to hold anyone who defies a subpoena in contempt, but Democrats so far have not pursued such action out of a reluctance to delay their impeachment proceedings. They withdrew a subpoena for Kupperman after he filed his lawsuit. Instead, Democrats have said they may cite the refusal of various administration officials to testify under orders from the president as an obstruction of Congress.

Trump tweeted Tuesday that the April call is "more important" than the July phone call at the center of the impeachment inquiry.

Meanwhile, Democrats and Republicans leading the House's impeachment inquiry laid out the competing cases they will make in the public hearings in dueling memos Tuesday.

The open hearings begin today with testimony from William Taylor, the acting ambassador to Ukraine, and George Kent, deputy assistant secretary of state for European and Eurasian affairs.

Gordon Sondland, the U.S. ambassador to the European Union, will testify on Nov. 20, according to Schiff's statement, as will Laura Cooper, a deputy assistant secretary of defense, and David Hale, the undersecretary of state for political affairs.

And on Nov. 21, the committee is to question Fiona Hill, a former National Security Council senior director.

Democrats argue that the evidence will spell out how Trump asked Zelenskiy to "initiate investigations to benefit the president's personal political interests in the United States ... leveraging an Oval Office meeting desired by the president of Ukraine or by withholding U.S. military assistance to Ukraine," and tried later to "obstruct, suppress or cover up information to conceal" evidence of those actions from Congress and the public, according to the Democrats' memo.

Republicans say the evidence to date does not support the allegations that "Trump pressured Ukraine to conduct investigations into the president's political rivals" or the allegation that "Trump covered up misconduct or obstructed justice," the GOP wrote in its memo.

"To appropriately understand the events in question -- and most important, assess the president's state of mind during his interaction with President Zelensky -- context is necessary," they stressed.

To Democrats, Trump's mentions in the July phone call of Biden and "CrowdStrike" -- a reference to a theory that the Democratic National Committee server hacked in 2016 ended up in Ukraine -- is evidence that Trump tried to push Ukraine into conducting investigations in exchange for releasing long-awaited security assistance.

Republicans, however, argue that the White House memo detailing that call is "fatal" to the Democrats' argument, saying that the call not only "shows no conditionality or evidence of pressure," but that Trump and Zelenskiy subsequently "have both said there was no pressure on the call."

Plus, Republicans argue, the security assistance eventually was released, and Trump met with Zelenskiy in September "without Ukraine investigating President Trump's political rivals."

"President Trump has a deep-seated, genuine and reasonable skepticism of Ukraine and U.S. taxpayer-funded foreign aid, independent of and preceding any mention of potential investigations of Ukraine's interference in the 2016 elections or Hunter Biden's involvement with Burisma, a notoriously corrupt company," the GOP wrote in the memo.

Schiff in his memo issued a warning to Republicans that the hearings "will not serve as venues for any Member to further the same sham investigations into the Bidens or into debunked conspiracies about 2016 U.S. election interference that President Trump pressed Ukraine to undertake for his personal political benefit."

Information for this article was contributed by Peter Baker of The New York Times; by Karoun Demirjian of The Washington Post; by staff members of The Associated Press; and by John Harney, Billy House and Bob Van Voris of Bloomberg News. 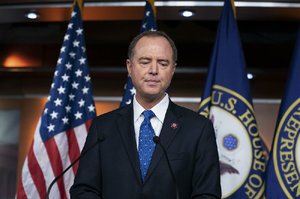 Photo by AP/J. SCOTT APPLEWHITE
House Intelligence Committee Chairman Adam Schiff, D-Calif., talks to reporters about the release by the White House of a transcript of a call between President Donald Trump and Ukrainian President Voldymyr Zelenskiy, in which Trump is said to have pushed for Ukraine to investigate former Vice President Joe Biden and his family, at the Capitol in Washington, Wednesday, Sept. 25, 2019.