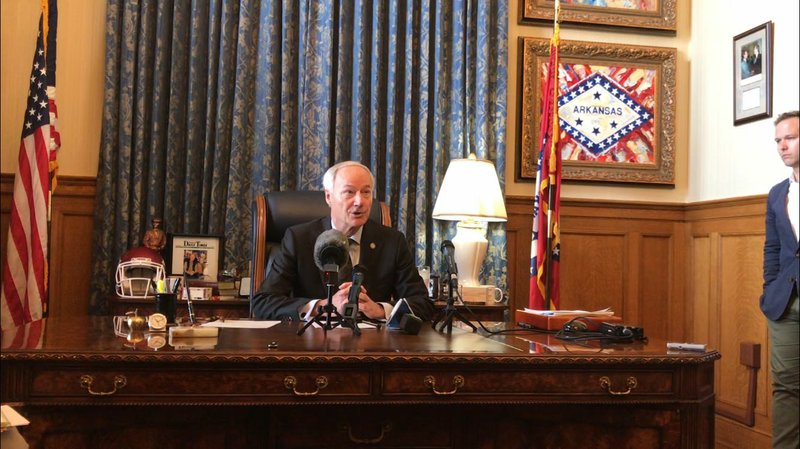 In this file photo Arkansas Gov. Asa Hutchinson is shown addressing reporters on Sept. 23, 2019 in his office at the state Capitol in Little Rock.

A legislative committee Tuesday endorsed Gov. Asa Hutchinson's request to transfer $1 million in one-time state funds to the state Department of Agriculture to support grants and projects within the Buffalo National River watershed.

In a voice vote, the Legislative Council's Performance Evaluation and Expenditure Review Committee recommended that the council approve the Republican governor's request when it meets Friday.

Last month, the committee skipped making a recommendation to the Legislative Council on the request, and then the full council delayed action on it.

Hutchinson said in a letter dated Nov. 1 that he is seeking the council's approval of his request this month, after, "as requested by the council, my staff and I fulfilled the requests to meet with legislators and their constituents to answer any questions that may have caused concern."

Hutchinson said the $1 million in one-time funds will be used to support grants and projects "including, but not limited to the following -- voluntary best management practices for farmers and landowners, improvements to wastewater and septic systems for cities and counties within the watershed, and reduction of sediment runoff from unpaved roads within the watershed."

The Buffalo River Conservation Committee and its subcommittees will identify projects and distribute funds to improve water quality and promote conservation practices, he said in the Nov. 1 letter. The Nature Conservancy and the Buffalo River Foundation also have collectively pledged $1 million toward the committee.

Hutchinson's creation of the conservation committee in September came after the state agreed this summer to purchase a conservation easement to shut down C&H Hog Farms, a large operation that is within the watershed. The state will pitch in $4.7 million and the Nature Conservancy will provide $1.5 million, according to state officials.

Sen. Terry Rice, R-Waldron, on Tuesday asked Ward about the inclusiveness of small animal agriculture on the conservation subcommittees.

Ward said, "regarding the subcommittees in particular, we have not identified those directly yet.

"The reason why is because we wanted that to be a joint effort between the four members that make up the [Buffalo River committee] as well as the governor ... but also legislators, particularly the legislators in that particular area," he said.

"So in regard to small animal owners and small animal agricultural producers, we certainly would invite their participation to be on the subcommittees," Ward said. "Regarding the makeup of what we are looking at, agriculture certainly would be a role in those subcommittees and in particular in looking at agricultural producers that are well-known and well-respected and within the area, not someone from Little Rock."

Ward added that two producers had been identified but not contacted yet, pending legislative review of the money request.

"We are talking about a $1 million rainy-day fund being put there when we have senior citizens centers closing. We got other ones struggling that we have asked additional monies for," he said. "While this is monies that can do some good, there are a lot of places the monies can do some good."

Sen. Missy Irvin, R-Mountain View, who chairs the Senate committee that met with its House counterpart in Jasper and Marshall on Oct. 30, said, "the last thing that we would want to do is authorize $1 million that is just going to sit there, that nobody is going to participate with because they are so skeptical.

"That's just a waste of us spending $1 million sitting over there, doing no good," she said. "That's why this whole process was really important to me and to the area legislators.

"We have requested that there would be oversight and reports coming to the Senate public health committee which have been agreed upon as well," Irvin said. "We are happy to meet jointly with the agriculture committee if we need to do that."