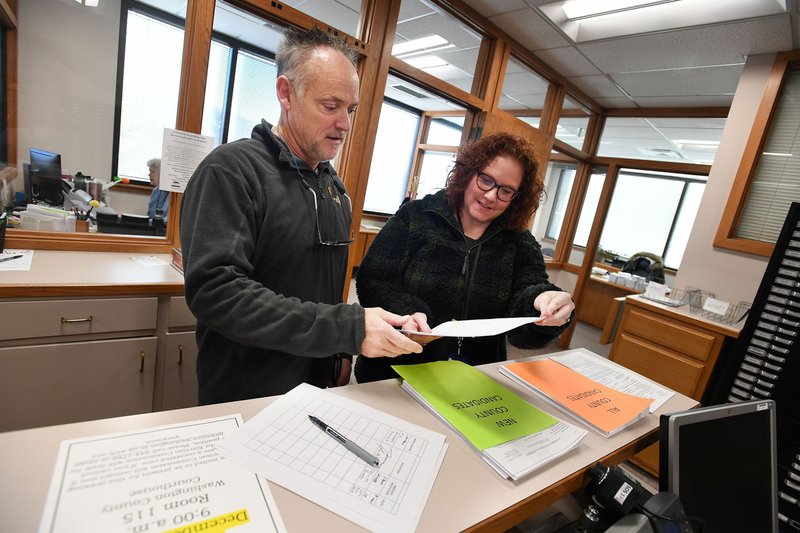 NWA Democrat-Gazette/J.T. WAMPLER Jennifer Sharpshair, deputy county clerk, helps John Brooks (left) of Fayetteville on Tuesday file to run for District 2 constable at the Washington County Courthouse in Fayetteville. Tuesday was the last to file the paperwork to run for public office.

FAYETTEVILLE -- Democrats won't contest as many Republican-held legislative seats in Northwest Arkansas as they did in 2018, but GOP candidates face plenty of competition from their own side, candidate filings show.

Three House members bowed out of reelection bids in 2020, all Republicans. Six Republicans are running to replace them, according to filings, which ended Tuesday.

Each winner of those contests will have a Democratic opponent in November, filings show.

A fourth GOP representative who barely won her 2018 primary faces two primary challengers in March. The winner of that contest will face a Democrat in the fall.

Filing for primaries, judicial positions and some school board seats closed Tuesday at the Arkansas Secretary of State's Office and county clerks' offices.

Democrats filed as candidates in all 15 Washington County Quorum Court districts while Republican candidates filed in 13 of the 15 districts.

Benton and Washington counties have 16 House districts containing at least some part of the two counties. All but four of those seats are held by Republicans. All House seats come up for election every two years.

This election cycle will have a primary, a general election contest or both in 13 districts.

No competing primary contestants filed for any of the three state Senate seats in Benton and Washington counties up for election in 2020. Two of the three incumbent senators running for reelection will face general election opponents.

Arkansas is holding its candidate filing several months early because the primaries are March 3, along with 13 other states participating in the "Super Tuesday" presidential primaries. A runoff for party primaries, if needed, will be March 31. The general election is Nov. 3.

Arkansas holds its primaries in May, with a filing period in late February, in nonpresidential election years.

On the Democratic side, the party hopes to build on gains from 2018 when two Democratic challengers in the region toppled their incumbent Republican opponents.

"We learned some good lessons in the last election," said Jacob Kauffman, state Democratic Party spokesman, about running in Northwest Arkansas. The Democrats fielded a candidate in all but two of the House districts in 2018 and, according to Kauffman, learned where to try again this year.

The Democrats are running in 13 House races, but are on defense this time in three of those.

"The last legislative session really put things into perspective for the voters of Northwest Arkansas," he said. "While many of the Democrat elected officials tried to campaign as 'moderates' in the 2018 election, they overwhelmingly voted for liberal policies when they arrived in Little Rock. This has energized our base in NWA," he said.

Incumbent Rep. Jana Della Rosa, R-Rogers, is running for reelection in District 90. First-time candidate Kendon Underwood came within three votes of beating her in 2018's GOP contest. Underwood is running again and Chris Latimer filed for his first race. The winner of the primary will face Democrat Kelly Ross Kraut in the general election.

The following members of Northwest Arkansas' House delegation have no major party opposition in either the primary or the general election: Reps. Gayla McKenzie, R-Gravette of District 92; Austin McCollum, R-Bentonville of District 95; Bruce Coleman, R-Mountainburg of District 81, and Denise Garner, D-Fayetteville of District 84.

Garner faces no challenger after winning her seat in the most expensive, hardest-fought legislative race in the region in 2018. She defeated GOP incumbent Rep. Charlie Collins, R-Fayetteville.

A majority of seats on the all-Republican Benton County Quorum Court has a Democratic challenger in November, according to filings with the county Clerk's Office.

Four seats will have a Republican primary and one seat, District 10, will see a Democratic primary.

Republicans Brian Armas and Jim Kibat will seek to represent District 6, and Republicans Doug Farner and Joseph Bollinger will face each other in District 7.

Democrats filed as candidates in all 15 Washington County Quorum Court districts while Republican candidates filed for 13 of the 15 seats.

Voters will chose replacements for five incumbents who chose not to run for reelection.

A pair of Democratic Party incumbents will be running unopposed in two Fayetteville districts. Shawndra Washington will be unopposed in District 8 and Suki Lin Highers has no opponent in District 11.

There will be primary election contests for voters in both parties.

Democratic Party voters in District 7, west of Fayetteville and Farmington, will choose between Stephen M. Ritterbush and Janelle Bradford Smiley.

Republican Party voters in District 4, in Springdale, will choose between Frederick W. Anderson and Bill Ussery.

Casey Copeland, a Libertarian Party candidate, filed for District 13 that covers much of western Washington County. Copeland's name will appear on the Nov. 3 general election ballot.

Justices of the peace serve two-year terms and are paid $200 per meeting in Washington County.

The following candidates in Benton and Washington counties filed for office Tuesday for the party primaries, nonpartisan general and school board elections March 3. Filing closed Tuesday. The deadline to register to vote in the March elections is Feb. 3. Early voting begins Feb. 17. The general election is Nov. 3.

Justice of the Peace

Justice of the Peace