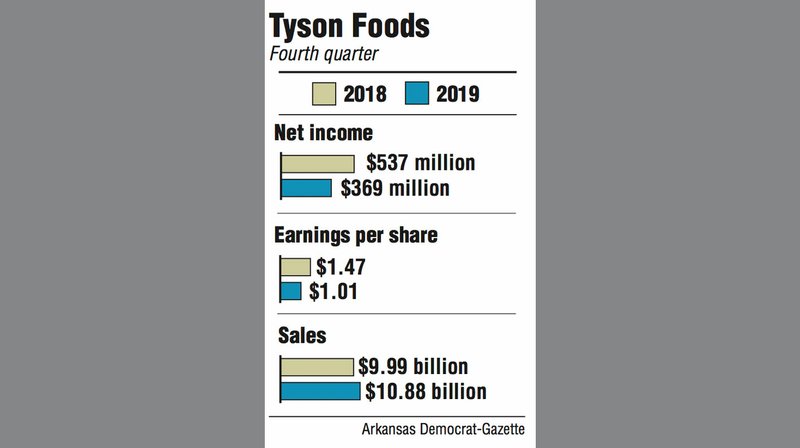 Tyson Foods Inc. on Tuesday reported waning sales growth and income in its fiscal 2019 fourth quarter, partially because of higher raw material and feed costs and a fire that temporarily closed a beef processing plant in Kansas.

Despite the short-term challenges, Noel White, Tyson's president and chief executive officer, told shareholders that the company is well positioned to grow, deliver and sustain its businesses.

"This includes growing our prepared foods and value-added chicken business, secondly, growing our international business and reducing our earnings volatility across [Tyson]," White said in a conference call Tuesday morning.

Sales rose 9% to $10.88 billion during the period, with most of the growth in Tyson's international and chicken businesses.

In June, Tyson acquired a few chicken processing plants from BRF S.A. in Europe and Thailand. In the past year, Keystone Foods, a major chicken supplier to McDonald's, was acquired for $2.16 billion, expanding Tyson's operational footprint in the U.S., China, South Korea, Malaysia, Thailand and Australia. The U.S. assets are factored into Tyson's chicken business, while the rest are in international/other, explaining the 480% volume change in that segment for the quarter.

"That's one thing about Tyson that's not necessarily a good or a bad thing. With all the acquisitions, the earnings -- especially the top-line numbers -- can change a lot, and it's a little bit hard to tease out the company's performance," said Alan Ellstrand, associate dean of the Walton College of Business at the University of Arkansas, Fayetteville.

Top-line numbers are gross sales. For example, Tyson's international sales skyrocketed to $513 million from last year's $60 million for the quarter.

"Obviously it was increased a lot by the acquisitions there and it's harder to focus on the individual components of the business," Ellstrand said.

Tyson's fourth-quarter adjusted earnings per share of $1.21 fell short of Wall Street's estimates of $1.30, according to a FactSet consensus of analysts. However, they topped Stephens Inc.'s estimate of $1.13.

Tyson reported total operating income of $604 million for the quarter, down from $819 million last year. Most of the decline came from a mix of short-term challenges that affected Tyson's pork, chicken and prepared foods businesses.

Ellstrand said the net income results are a reminder that Tyson is in a competitive marketplace. "The costs that they incur go up and down at times, but generally speaking, the margins just got squeezed this time, and prepared foods, a business where I think they look ... for bigger margins, took a big hit there too.

"Certainly the company is still doing well, but I think it just reflects that it's a challenging environment to be in right now," he said.

Pork faced tighter margins at a time when supply surpassed demand and export constraints drove livestock costs up faster than sales prices, Tyson said. That resulted in income of $26 million, compared to $76 million a year ago.

Prepared foods income was $104 million, down from $232 million last year. This was attributed partially to increased operating costs, including a $60 million increase in raw material costs, Tyson said.

Beef income climbed to $376 million for the quarter, despite a fire that temporarily shut down a beef processing plant in Kansas, costing Tyson $31 million.

During the conference call, White said he was pleased to say "our team members whose jobs were affected by the fire are still being paid" while the plant is rebuilt. He estimated that the plant would be "up and running in the next 60 days."

Much of Tuesday's conversation focused on the question of how African swine fever, a disease that is harmless to humans but has destroyed more than half of China's hog supply, will affect Tyson Foods next year. Executives and some analysts remain optimistic that Tyson's exports will grow, but they are unsure exactly by how much.

"We did not provide specific [earnings per share] or sales guidance" for 2020, said Stewart Glendinning, Tyson executive vice president and chief financial officer. "The timing and magnitude of potential impacts resulting from African Swine Fever are still hard to quantify. Additionally there are continuing developments in trade negotiations which can create uncertainties. ... While these factors alone did not drive our decision, they do compound the difficulty of accurately forecasting [earnings per share] and sales."

Glendinning said Tyson was well-positioned to deliver returns for investors, with "potential for profound upside depending on how events materialize."

In closing remarks, White echoed Glendinning, saying the positive effects from the swine fever outbreak are still hard to quantify.

"But here's what we do know," he said. "It is likely to improve export markets and change protein consumption dynamics for a number of years ... but our long-term success is not dependent on [swine fever] or any other one-time events. Tyson Foods is a strong company with a sound strategy and a unique, diversified business model."

Sales grew 6% to a record $42.4 billion. Much of this was attributed to chicken-related acquisitions and increased pricing in Tyson's beef and prepared foods businesses, White said.

In 2018 a federal tax change took effect that lowered the tax rate from 35% to 21% for corporations, resulting in earnings windfalls reflected in many shareholder reports. Tyson's 2018 results included a one-time tax benefit of $2.71 per share.

Tyson expanded operations in Europe and Asia last year, opened new distribution centers and offices focused on robotics and automation, worked toward meeting its sustainability goals and developed new products, including breakfast and alternative protein offerings: Raised and Rooted plant-based nuggets and Aidell's blended sausages and meatballs made of chicken and plant-based ingredients. White said that since the last earnings call, Tyson has "nearly doubled distribution of Raised and Rooted nuggets to 7,000 stores and expanded into food service."