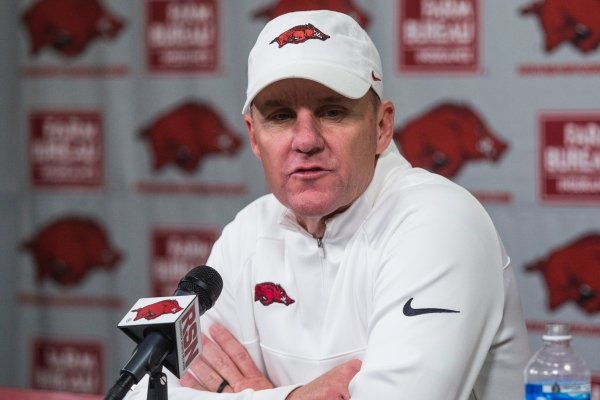 Several years before Chad Morris was hired as the University of Arkansas coach for the 2018 season and joined Auburn's Gus Malzahn in the SEC West, the two became close friends.

Both were high school coaches in the early 2000s -- Malzahn at Springdale and Morris at Stephenville, Texas -- when Morris sought out Malzahn to learn more about the hurry-up, no-huddle offense. They followed similar career paths by becoming college offensive coordinators and eventually head coaches.

So it was no surprise Malzahn and Morris talked after Morris was fired by Arkansas Athletic Director Hunter Yurachek on Sunday.

"I talked to Chad Sunday and just tried to encourage him," Malzahn said Wednesday on the SEC coaches teleconference. "He's a great person, great coach. He'll land on his feet."

Malzahn didn't want to comment on how Morris was doing when they spoke.

"That probably just needs to stay between me and him," Malzahn said.

Morris was 0-14 in SEC games, but he had five losses with a margin of seven or fewer points, including 31-27 against Texas A&M and 24-20 at Kentucky this season.

"I just feel for Chad," Kentucky Coach Mark Stoops said. "He's one hell of a guy and a good football coach and a great person.

"You hate to see [the firing]. We all understand what we're getting into with these jobs and this business. I just wish Chad nothing but the best."

Alabama beat Arkansas 48-7 this season, but the Razorbacks' offense was effective last year when the Tide won 65-31 in Fayetteville.

"I always thought Chad was a really good coach," Alabama Coach Nick Saban said. "I know playing against him, their offense always presents lots of challenges.

"I'm a coach and I'm a professional and I don't ever like to see anybody get fired. I know how hard he's worked there to try to get it right, and I have a tremendous amount of respect for him. Hopefully, he'll be able to have success in another endeavor somewhere down the road."

South Carolina Coach Will Muschamp got to know Morris well when both worked in Austin. Muschamp was the defensive coordinator at Texas and Morris coached at Lake Travis High School.

"That's kind of the business we're in, that you've got to win right now," Muschamp said of Morris being fired after 22 games with a 4-18 record. "But Chad's an outstanding football coach, he's an outstanding person. He'll land on his feet in a good spot."

Florida Coach Dan Mullen said one aspect of Morris being fired that gets overlooked is how many other people's jobs also are affected.

"There are an awful lot of families that are going to have to be packing up and moving their kids to different school systems. You're looking to possibly buy a home and sell a home and being away from your family for an extended period of time. It's always tough when that stuff happens. So you feel for not just Chad, but for all the coaches and the staff."

Locker room talk is referred to as "crude, vulgar" by its dictionary definition.

There's a reason coaches and players say things in the privacy of a locker room they wouldn't think of repeating to the media or in public.

But an LSU player thought it would be a good idea to post video on social media of Coach Ed Orgeron's comments to the team in the visiting locker room after the Tigers ended an eight-game losing streak to Alabama by beating the Crimson Tide 46-41 on Saturday.

"You get emotional," Orgeron said at his Monday news conference when asked about the video. "You talk to your team -- it's your family. We talk around the dinner table and say some things that outside the family we don't say.

"It was by no means to hurt anybody, nothing like that. It was just a fiery moment, a very emotional moment."

The video on Instagram has been deleted, and Orgeron and LSU have declined to identify the player who posted it.

"They are so used to having those phones on them all the time. I mean, we have a pre-game meal, I say, 'Can you turn your phones off just a little bit so we can say the prayer?' And we say the prayer and boom, they're back on their phones."

Powell started in place of injured senior Kelly Bryant against No. 4 Georgia between the hedges at Sanford Stadium on Saturday night and struggled as the Bulldogs won 27-0.

"Just seemed like every time we were getting a drive going, something would happen," Powell told reporters after the game. "I put a lot of that on me. I've got to be a lot better."

Powell completed 10 of 22 passes for 84 yards with 1 interception, but he also wasn't helped by his receivers at times, according to Missouri Coach Barry Odom.

"I thought Taylor did some things to try to manage the game and the short passing areas that gave us a chance," Odom said. "We didn't win many one-on-one matchups there. We had an opportunity to make catches on the ball. We didn't make many."

Missouri receiver Barrett Banister, who also was Powell's teammate at Fayetteville, said the Tigers have to do a better job of making contested catches.

"There were a couple times on third down Taylor put the ball up, and we've got to make those plays," Banister told reporters.

Odom said Bryant, who sat out because of a hamstring injury, will be well enough to start against Florida on Saturday, but that he remains confident in Powell's ability to play well if needed.

"Taylor understands the importance of preparing the way he needs to, because he's done that all year," Odom said. "He'll go in and play better with the next opportunity that he gets.

"I'm proud of the way he competed and battled and prepared. He did everything he could to try to give ourselves a chance to win."

After LSU won at Alabama, the Tigers jumped over Ohio State to take the top spot in the College Football Playoff rankings released Tuesday night.

Ohio State dropped to No. 2, with Clemson moving to No. 3. There's no surprise to have three undefeated teams at the top of the poll.

But it was a bit unexpected to see Georgia move up to No. 4 with Alabama at No. 5. The Bulldogs and Tide are both 8-1, but Georgia lost in overtime at home to South Carolina -- a 4-6 team -- while Alabama lost to LSU.

What has Georgia ahead of Alabama for now, according to College Football Playoff committee Chairman Rob Mullens, is strength of schedule. The Bulldogs have beaten two top-25 teams -- Notre Dame and Florida -- while none of Alabama's victories are over teams in the poll.

Chad Morris, who was was 0-14 in conference games at Arkansas, is the second SEC coach to go winless in conference play who led a team for more than one season, according to AL.com.

Alabama junior quarterback Tua Tagovailoa completed 21 of 40 passes for 418 yards and 4 touchdowns against LSU, but he was limping noticeably after LSU's 46-41 victory over the Tide.

Tagovailoa, while able to play at a high level, is still recovering from a right ankle injury that required surgery.

Saban said whether Tagovailoa plays at Mississippi State on Saturday likely will be a game-time decision.

"I don't even know for sure if he'll be able to practice fully," Saban said. "We expect him to be able to do some things, but we'll just have to wait and see. It's just kind of day to day."

• LSU Coach Ed Orgeron is 8-1 against top-10 teams the past two seasons, including victories this year at Texas, at home over Florida and Auburn, and at Alabama. The lone loss to a top team in that span was to No. 1 Alabama last season.

• Texas A&M is 5-0 all-time against South Carolina. The Aggies and Gamecocks first played in 2014 after both joined the SEC.

Auburn senior defensive tackle Derrick Brown, from Sugar Hill, Ga., will look to shut down Georgia's offense when the Bulldogs play the Tigers.

Brown, 6-5, 318 pounds, and a projected NFL first-round draft choice, is having a dominant year as an interior defensive lineman with 37 tackles, including 8 for losses totaling 42 yards.

Georgia (8-1, 5-1 SEC) can clinch its third consecutive SEC East title with a victory at Auburn (7-2, 4-2) when the teams play for the 124th time. The last SEC East team with at least three consecutive division titles was Florida, which won five in a row from 1992-96. Auburn beat Georgia 40-17 in 2017, the last time the teams played played in Jordan-Hare Stadium, but the Bulldogs and Tigers both have winning records against each other as the road team. Georgia, a 2 1/2-point favorite, is 16-12-2 at Auburn, while the Tigers are 18-15 in Athens.

No. 11 Florida at Missouri

"We didn't go into this season saying, 'We need to go beat Alabama.' We have more goals ahead of us."

-- LSU quarterback Joe Burrow after the Tigers won at Alabama.

"We're playing one of the more talented teams in the entire country. Maybe the most talented."