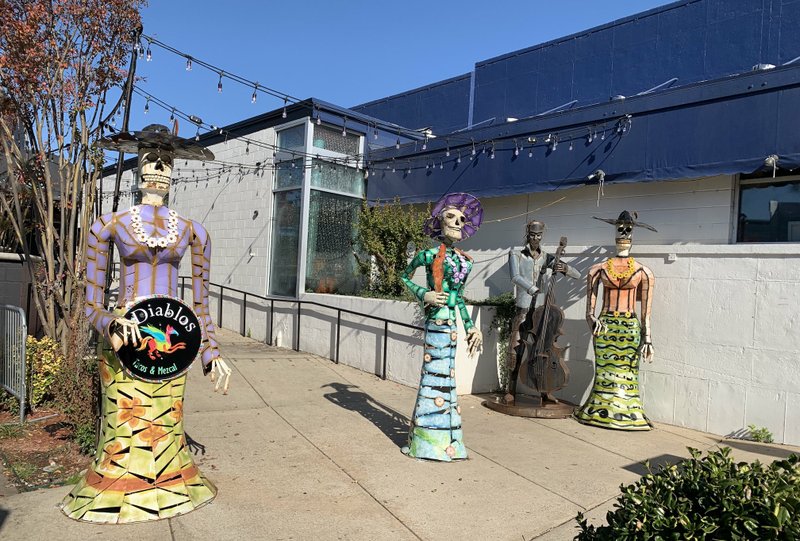 The opening is about two weeks out for Diablos Tacos & Mezcalaria, 300 President Clinton Ave. at the confluence with LaHarpe Boulevard, at the western edge of Little Rock's River Market District. It's the Little Rock offshoot of Diablos Tacos & Mezcal, an upscale Mexican restaurant that opened in February at 528 Central Ave., Hot Springs. The Facebook page, tinyurl.com/yy2ujfpp, posted a hiring notice Nov. 5. There's a working phone number: (501) 500-2323 (we were treated to several bars of "The Hall of the Mountain King" from Edvard Grieg's Peer Gynt before somebody answered it). The 5,500-square-foot space started out as the "Rumba" restaurant half of Rumba & Revolution and most recently housed the very short-lived Live Life Chill.

Partner and general manager Antonio Gonzalez in August described Diablos as a "new concept in Arkansas ... pairing mezcal and a good selection of wine with the best of Mexico and Mediterranean food." The menu, which he expects will expand in Little Rock over the one in Hot Springs, focuses on "urban" tacos and tapas, the latter based on olive oil, wine, bread and cheese. (Check it out at diablostacosandmezcal.com.) The Facebook page lists hours as 11 a.m.-10 p.m. daily, same as the one in Hot Springs, but Gonzalez has said he expects the Little Rock spot to stay open later on weekends.

And speaking of the River Market, we're told there's a Jan. 3 tentative opening date for The Library Kitchen + Lounge, going into the former Gusano's space, 313 President Clinton Ave., Little Rock. Developer Rob Byford described it a couple of months ago as "a high energy concept" with street-facing garage-style doors, a lounge area complete with artificial turf and large flat-screen TVs and a stage area in the back for music. Byford is also putting in a streetside "TOGO" a Bar window with quick-service menu items to take advantage of the recently created River Market Entertainment District, within which consumers of alcoholic beverages can take them out onto the street on weekends and during specific celebratory events. A center-positioned bar will feature a number of local craft beers and cocktails. The menu will display a Delta influence, playing off Byford's Memphis and Arkansas roots, including barbecue — meat platters, sandwiches, nachos, wings and Memphis-style ribs — plus pasta selections featuring Byford's award-winning Sunday Italian Gravy.

And speaking of Mexican restaurants, the opening of the second Baja Grill — under renovation in the former Palace Theater, 224 W. South St., Benton — has been pushed back until after the first of the year. It's a return to its Saline County roots for the Cali-Mex operation, which started out as a Benton-based food truck before taking over the space at 5923 Kavanaugh Blvd. in Little Rock's Pulaski Heights. President and CEO Heather Baber anticipates that the Benton outlet will have the same menu and the same hours — 11 a.m.-9 p.m. Monday-Thursday, 11 a.m.-10 p.m. Friday-Saturday; they're looking at keeping the bar area open perhaps an hour later than the dining room, "but we're going to play that by ear." The phone number in the Heights is (501) 749-1400; the website is EatBajaGrill.com.

We can't say for certain, but The Capital's Seafood House, 1706 W. Third St., Little Rock, appears to have closed. The light-up "closed" sign burned in the front window throughout the weekend, and calls to the phone number, (501) 214-1441, returns only a voicemail recording during business hours.

Snee Dismang, part-time bartender at North Bar, Lakehill Shopping Center, 3812 John F. Kennedy Blvd. on North Little Rock's Park Hill, and her husband, North Bar co-owner Kyle Dismang are opening a restaurant not-quite-next door — at 3824 JFK Blvd., where we spotted a notification that a liquor license is pending. It will be called Newfangled Love Kitchen. Dismang says she has a target to open at the beginning of January. According to a post on Instagram (instagram.com/p/B4jBJjqACoB), it will serve "(gourmet-ish) diner food in a casual environment where you order at the counter." The relaxed vibe will include free Wi-Fi and "plenty of seating for small and large groups," and it will serve Sunday brunch. The menu "will focus heavy on farm-to-table seasonal ingredients. Meats will be sourced from local farmers. We will have the indulgence eats and healthy options as well." Equal portions of the menu will be plant-based vegan and gluten-free, cooked on dedicated gluten-free equipment. The bar will focus mainly on bottled beers, "but we might have a couple on tap," Dismang says; the cocktails will be minimal, but they will serve "margaritas and stuff like that," with bloody Marys and mimosas for brunch. Hours are still a work in progress; she expects to be open six days a week, opening around 10:30 or 11 a.m. and closing around 8 — earlier than North Bar, with a possible 2-4:30 p.m. break. The revolving-door storefront space has housed several Mexican/Latin American restaurants, including La Salsa Mexican & Peruvian Cuisine, Las Palmas and (most recently) Bucanas Billar y Taqueria. 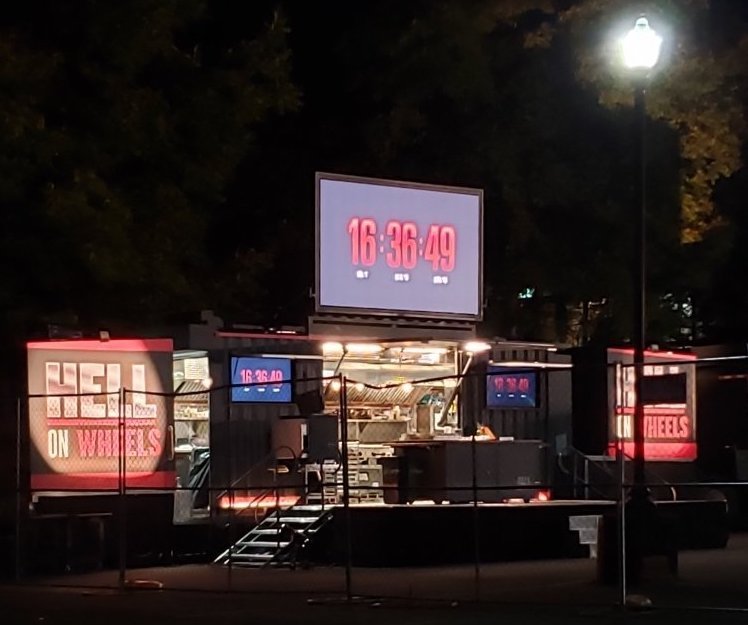 Hell on Wheels, the mobile kitchen for Chef Gordon Ramsay's 24 Hours to Hell and Back, set up on a parking lot near the University of Central Arkansas in Conway. Ramsey was apparently in the process of "rescuing" nearby Bears Den Pizza. Arkansas Democrat-Gazette/Maggie McNeary

Bears Den Pizza, 235 Farris Road, Conway, reopened at 3 p.m. Tuesday after being closed over the weekend for renovations. But it's pretty certain that those renovations were the result of being a target, or at least the subject, of a visit by TV chef Gordon Ramsay's reality TV show 24 Hours to Hell and Back, which rescues struggling restaurants across the country, each in under 24 hours. Photos posted on social media show Ramsey and his crew outside the restaurant on Saturday and the show's Hell on Wheels truck, which serves as a temporary kitchen for a restaurant in the process of being revamped, set up in a parking lot near the corner of Bruce Street and Farris Road, steps away from the University of Central Arkansas. Bears Den employees would not confirm or deny anything otherwise, and there's no word on what changes Ramsay, who is usually pretty blunt and minces no words, recommended. No idea when any show involving Bears Den would air, but the third season of the show starts Jan. 7. The restaurant phone number, by the way, is (501) 328-5556.

The way the show works: Ramsay, also known for his work on TV's Hell's Kitchen, Masterchef and Kitchen Nightmares, first shows up in disguise at a restaurant to evaluate its problems. (Among Bears Den's most recent: A routine state Health Department inspection last week included an observation that a cook "touched chips with bare hands" but the error was corrected on-site.) Ramsey subsequently confronts the staff with footage of its delinquencies and challenges them in no uncertain terms to turn the place around.

And the Hell on Wheels truck was spotted Tuesday outside SoBo (aka South Boulevard) on Maumelle Boulevard at Counts Massie Road, on the North Little Rock side of Maumelle. Details were still coming in as of deadline.

Milano's Italian Grill, 1800 Club Manor Drive, Maumelle, has reopened following a change in ownership, and with a new menu. New owner Feim Veseli and his family operate more than two dozen restaurants, mostly Mediterranean or Italian and most of them in Texas but also in Iowa and Illinois. The new menu resembles the old one, "but better, I promise," he says, with a lot more made-from-scratch-daily items, including the soups and desserts. The new all-day hours, according to the Facebook page, facebook.com/MilanosMaumelleAr, are now 11 a.m.-9 p.m. Tuesday-Saturday, 11 a.m.-8 p.m. Sunday. The phone number, (501) 734-8027, remains the same.

The Dallas-based Nothing Bundt Cakes chain is marking National Bundt Day, which is Friday, with a nationwide Bundt Bash, giving away Confetti Bundtlets (miniature cakes) at all 300-plus bakery locations, including the ones at 12312 Chenal Parkway, Little Rock, and 4409 W. Walnut St., Rogers. The giveaway starts at 11:15 a.m. and lasts until they're gone; the first 22 people in line get free Bundtlets for a year (in the form of a punch card for one per month, redeemable through Nov. 14, 2020) in honor of the chain's 22nd birthday. Hours at both Arkansas outlets: 9 a.m.-6 p.m. Monday-Friday: 10 a.m.-6 p.m. Saturday. Visit nothingbundtcakes.com/BundtBash.

If your restaurant will be open on Thanksgiving Day, which, of course, is Nov. 28, rush us the details — including hours of holiday operation, prices for buffets and prix fixe meals and a phone number where people can make reservations and obtain additional information — by Monday via email: eharrison@adgnewsroom.com. We'll run the list Nov. 21 and again on the holiday, adding any late entries online. (And yes, we'll do the same thing for Christmas. That list will run Dec. 19, the last Thursday preceding the holiday.)