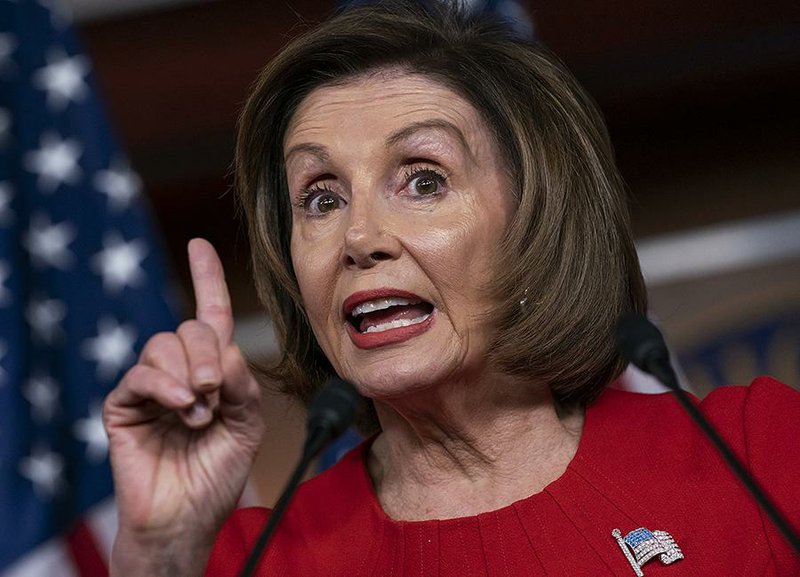 House Speaker Nancy Pelosi called Thursday for President Donald Trump to make known anything “that is exculpatory” that would show his innocence. More photos at arkansasonline.com/1115leaders/

WASHINGTON -- Escalating the House case for impeachment, Speaker Nancy Pelosi on Thursday accused President Donald Trump of committing bribery by seeking to use U.S. military aid as leverage to persuade the Ukrainian government to conduct investigations that could politically benefit Trump.

The shift toward bribery as an impeachable offense, one of only two crimes specifically cited in the Constitution, comes after nearly two months of debate over whether Trump's conduct amounted to a "quid pro quo" -- a term describing an exchange of things of value.

"The devastating testimony corroborated evidence of bribery uncovered in the inquiry, and that the president abused his power and violated his oath by threatening to withhold military aid and a White House meeting in exchange for an investigation into his political rival," Pelosi, D-Calif., said at her weekly news conference in the Capitol.

Bribery, she suggested, amounted to a translation of quid pro quo that would stand to be more accessible to Americans: "Talking Latin around here: E pluribus unum -- from many, one. Quid pro quo -- bribery. And that is in the Constitution attached to the impeachment proceedings."

[Video not showing up above? Click here to watch » https://www.youtube.com/watch?v=EaPH8yguB48]

Article II of the Constitution holds that the president and other civil federal officials "shall be removed from Office on Impeachment for, and Conviction of, Treason, Bribery, or other high Crimes and Misdemeanors."

Pelosi's remarks came a day after William Taylor, the top American envoy in Kyiv, and George Kent, a deputy assistant secretary of state overseeing Ukraine policy, told lawmakers in the House's first public impeachment hearing since 1998 that they were deeply troubled by an apparent perversion of U.S. policy done at the apparent behest of Trump's personal lawyer Rudy Giuliani and Trump himself.

Republicans, meanwhile, dismissed the testimony of Taylor and Kent as hearsay and secondhand information that could not elucidate Trump's personal action or motives surrounding the requests for investigations targeting Hunter Biden, son of former Vice President Joe Biden, who is now running for the Democratic nomination for president, as well as a debunked theory that Ukraine tried to undermine Trump's 2016 campaign.

In a message to Trump and response to Republican criticism, Pelosi said, "If the president has something that is exculpatory -- Mr. President that means you have anything that shows your innocence -- then he should make that known."

Trump continued to assail the proceedings as "a hoax" on Thursday.

The president, who said he was too busy to watch the initial hearing as it was televised, caught up in the White House residence Wednesday evening and tweeted along with a Fox News morning recap Thursday.

The president flatly denied the latest revelations. During Wednesday's hearing, a diplomat testified that a State Department witness overheard Trump asking about Ukraine investigations the day after his phone call with Kyiv.

"First I've heard of it," he said, brushing off the question at the White House.

Trump also lashed out at Democratic investigators and what he called a "deranged impeachment witch hunt" at a rally Thursday in Louisiana in support of gubernatorial candidate Eddie Rispone. While arguing it was a political boon for his reelection, Trump acknowledged a personal toll from the impeachment process.

"I have one problem," Trump said. "Impeachment to me is a dirty word, it's been very unfair, very hard on my family."

Trump repeated his denials of wrongdoing in his dealings with Ukraine, asserting he had no need to ask that nation to investigate the Bidens.

"We took down Bush, Clinton, Obama, with no experience, but I had you and we won," Trump said of his 2016 victory. "Think about that and then think about me, 'gee, let's get some help from Ukraine in order to beat sleepy Joe Biden.' I don't think so."

Democrats have begun using the term "bribery" more freely in recent days to describe what a string of diplomats and career Trump administration officials have said was a highly unusual and inappropriate effort by Trump and a small group around him to extract a public promise from Ukraine to investigate.

Intelligence Committee Chairman Adam Schiff, D-Calif., also used the word in an interview this week with National Public Radio: "On the basis of what the witnesses have had to say so far, there are any number of potentially impeachable offenses, including bribery, including high crimes and misdemeanors."

Asked Thursday why Trump's conduct amounted to bribery, Pelosi said, "The bribe is to grant or withhold military assistance in return for a public statement of a fake investigation into the elections. That's bribery."

Speaking to reporters Thursday, House Minority Leader Kevin McCarthy, R-Calif., dismissed Wednesday's hearing and the impeachment inquiry generally as a waste of Congress' time -- referring to a March comment Pelosi made to The Washington Post Magazine where she called impeachment unwise "unless there's something so compelling and overwhelming and bipartisan" to warrant it.

McCarthy told reporters that the hearing had only confirmed that the accounts from Taylor, Kent and other witnesses who have offered damaging information about Trump are not firsthand and therefore could not be trusted. And he pointed back to the July phone call between Trump and Ukrainian President Volodymyr Zelenskiy at the heart of the impeachment inquiry.

"The call summary is still the most important piece of evidence we have, and it shows no pressure or even mention of conditionality between the two leaders," McCarthy said.

The House Intelligence Committee will reconvene today for a second public hearing [WATCH LIVE » arkansasonline.com/1115hearing] featuring Marie Yovanovitch, the former U.S. ambassador to Ukraine who was recalled to Washington in May after an alleged smear campaign pushed by Giuliani and other Trump allies.

Lawmakers are also set to hear private testimony from David Holmes, a Kyiv embassy official who is said to have overheard Trump discussing investigations in a July 26 phone call with Gordon Sondland, the U.S. ambassador to the European Union.

Sondland and several other witnesses are scheduled to testify publicly next week.

A second U.S. Embassy staff member in Kyiv overheard a cellphone call between Trump and his ambassador to the European Union discussing a need for Ukrainian officials to pursue "investigations," The Associated Press reported.

The July 26 call between Trump and Sondland was first described during testimony Wednesday by Taylor, the acting U.S. ambassador to Ukraine. Taylor said one of his staffers overhead the call while Sondland was in a Kyiv restaurant the day after Trump's July 25 phone call with Zelenskiy.

The second diplomatic staff member also at the table was Suriya Jayanti, a foreign-service officer based in Kyiv. A person briefed on what Jayanti overheard spoke on condition of anonymity to discuss a sensitive matter currently under investigation.

Trump said Wednesday that he did not recall the July 26 call with Sondland.

The White House did not respond to questions Thursday about the second witness to the call with Sondland.

The staffer Taylor testified about is Holmes, the political counselor at the embassy in Kyiv, according to an official familiar with the matter who spoke on condition of anonymity.

Taylor was one of the first witnesses called Wednesday during the impeachment inquiry's initial open hearing. He testified that his staffer could hear Trump on the phone asking Sondland about "the investigations."

Jayanti is an attorney who joined the State Department in 2012 and was previously posted at the U.S. Embassy in Iraq. She has been stationed since September 2018 at the embassy in Kyiv where she helps coordinate U.S. business interests with the former Soviet republic's energy industry.

Jayanti was in Washington last month and scheduled for a private interview with impeachment investigators. But the deposition was canceled because of the funeral for former House Oversight Chair Elijah Cummings and has not yet been rescheduled.

U.S. diplomats and other government employees are instructed not to use cellphones for sensitive official matters while traveling anywhere abroad and notably in countries known to be targeted for surveillance by intelligence agencies such as Russia, China and Israel.

Ukraine has long been among the countries of concern, particularly since a 2014 incident in which the U.S. accused Russian intelligence of eavesdropping on and then leaking a recording of a conversation between two senior U.S. officials in Kyiv.

In a private hearing last month, former White House Russia adviser Fiona Hill said she was concerned that Sondland posed a counterintelligence risk, according to a transcript released by the House. Hill cited a Sondland habit of giving out personal cellphone numbers -- hers and national security adviser John Bolton's as well as his own -- and his failure to get appropriately briefed ahead of meetings. 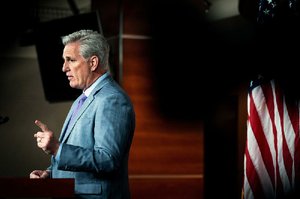 Photo by The New York Times/ERIN SCHAFF
“There’s nothing compelling” in the impeachment inquiry testimony, House Minority Leader Kevin McCarthy told reporters Thursday. He said the summary of the July phone call between President Donald Trump and Ukraine’s president “is still the most important piece of evidence we have” and shows, he said, that there was no pressure from Trump.