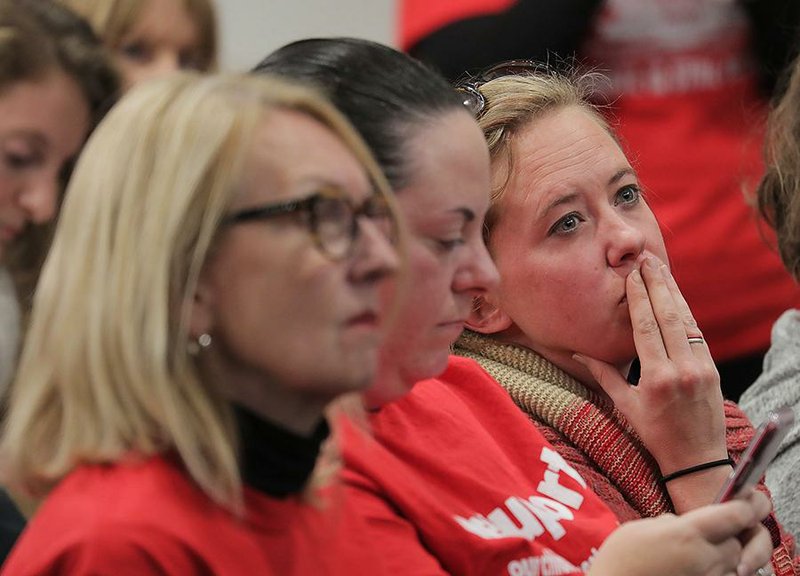 Terry Elementary librarian Tommie Kelly (from left), parent Leann Wilson and Shay Rafferty, who said she was a concerned community member, watch the proceedings Thursday at the state Board of Education meeting. More photos at arkansasonline.com/1115edboard/

Arkansas Board of Education members adjourned their daylong-meeting Thursday after audience shouts of "No taxation without representation!" kept board members from voting on matters related to the state-controlled Little Rock School District.

The Education Board plans to take up the Little Rock issues -- particularly a proposed two-member expansion of the district's seven-member Community Advisory Board and the reopening of the election of teachers to the district's personnel policy committee -- when the board reconvenes at 9 a.m. today.

Also to be discussed today are revisions to, or at least a process for revising, a draft memorandum of understanding on the conditions and/or limitations under which the Little Rock district would be returned to the management of a locally elected school board.

Thursday's meeting started at 10 a.m. and ended shortly after 5 p.m. on a day in which teachers and support staff members of the Little Rock Education Association conducted a one-day strike as a way of demanding that the 23,000-student system be fully released from state management.

[GALLERY: Board of Education hears from Little Rock citizens » arkansasonline.com/1115edboard/]

After picketing at schools and rallying in front of the Arch Ford Education Building and the state Capitol, teachers and their community supporters filled to overflowing the Education Board's meeting room to hear the Little Rock district-related items -- including options from Little Rock Superintendent Mike Poore for redrawing school attendance zone boundary lines before the 2021-22 school year.

Audience members also attended the meeting to speak out.

Nearly 30 students, parents, teachers and lawmakers took about 3 minutes each to demand that the Education Board return local governance to the district and/or reinstate collective bargaining rights to the district's employees union. The Education Board in October ended those collective bargaining rights in favor of establishing personnel policy committees to advise the district on compensation and other employee-related matters.

"I ask you to have a heart," teacher Roy Vaughn said, adding that the board has provided no reasons why teachers or the employee union are a problem.

Parent Veronica McClane told the board that she is tired of and angry about the board's failure to listen to community members.

"When you ask the community for feedback, actually listen to us," she said.

Jeff Wood, parent and chairman of the district's Community Advisory Board, asked the board to support the formation of a traditional high school in the northwestern part of the city.

The Education Board assumed control over the Little Rock district -- dismissing the elected seven-member school board and placing the superintendent under state direction -- in January 2015 because six of then 48 schools had chronically low test scores.

The Education Board is obligated by law to consolidate, annex or reconstitute a district that continues to struggle academically after five years in state control. The Education Board has been working for several months to craft a plan for reconstituting the district that has eight F-graded schools and is classified by the state as being a Level 5 -- in need of intensive support district.

In October, the Education Board approved a plan for a November 2020 election of a nine-member school board that would have limits on its authority.

Education Department staff members late last month drafted a follow-up memorandum of understanding that detailed what those board limits might be.

That draft proposed establishing "community schools" that would be developed and operated by a partnership of state, district and city of Little Rock representatives. The draft memorandum called for the district and state to develop new criteria for the district's exit from Level 5-- intensive support. And the draft proposed prohibiting the reinstatement of collective bargaining and reserving for the state the authority to hire and fire the superintendent, as well as aiding the district in its budgeting.

Education Board member Chad Pekron of Bryant, the board's newest member, said Thursday that the terms of the draft memorandum are "not what I had envisioned last month."

"When I made the motion to return to the board full control with an MOU [memorandum of understanding] what I had in mind was a few big-picture items, but other than that it would be truly local control," Pekron said. "I do think there are a lot of things in the MOU that are good ideas, but I don't think they are things we should be dictating. I think there are a lot of good things there in terms of organizing the community around schools, for example. I don't think we as a state board should be continuing to run those schools. At some point we have to let the district take charge."

Pekron said he did want an agreement with the district that includes what he called "a few guardrails." Those would limit the district's ability to change superintendents, negotiate with the employees' union or initiate litigation for as long as the district is classified as needing Level 5 -- intensive support. In his public comment Pekron called for district limits on changing principals, but he said later that he meant to say superintendents.

"Also I think that at some point we need to give this district a clear set of ideas on what you need to do to get your school district back completely and get out from under the guardrails," Pekron told his board colleagues, adding that the criteria "should be so clear that anyone's grandma can understand."

Parent activist Ali Noland later in her remarks to the board vehemently objected to the proposed guardrails, saying they will result in the state "having its thumb on the district" for as many as 10 more years. And she said the local school board should decide whether to recognize the employee union.

Sen. Will Bond, D-Little Rock, accused the Education Board of giving the community whiplash, and creating chaos and distrust with its actions and proposals. He said there is no reason for the state to have control over the district's budget because the district is not in fiscal distress.

Arkansas Education Secretary Johnny Key noted that since the first mention of making some of the district's academically struggling schools into "community schools" that would be hubs of their neighborhoods, more information has become available on community school models.

Mike Hernandez, the state superintendent for coordinated support and services, said there might be value in visiting some already operating community models and putting out requests for proposals from organizations on how best to establish and operate community schools.

On another matter related to the Little Rock district, Education Board member Kathy McFetridge of Springdale asked that the personnel policy committee that is being formed in the district -- at the direction last month of the state Education Board -- be made up of one teacher representative from each of the more than 40 campuses.

District teachers are midway through electing eight teacher members to that new advisory committee that is required by law for every district in the state. The Little Rock district didn't have personnel policy committees for its teachers and support staff until the Education Board directed last month that they be established. That's because the district recognized the Little Rock Education Association union as the exclusive contract bargaining agent for its employees.

Education Board Chairman Diane Zook of Little Rock and Melbourne agreed that expanded policy committee membership would be important to have at a time when the newly formed committee would be setting up bylaws.

Arkansas Teacher of the Year and ex-officio board member Stacey McAdoo of Little Rock questioned the effectiveness of such a large committee and offered assurances to the board that the Little Rock Education Association, which is working to have its members elected to the policy committees, represents all employees -- not just its members.

Zook and McFetridge said the large personnel policy committees in other districts, such as Springdale, work very well.

On still other matters related to the state-controlled Little Rock district, the Education Board briefly discussed but took no vote on a proposal to add two at-large members to the district's seven-member Community Advisory Board, which makes recommendations to Key on personnel and policy matters. Key, who serves in lieu of a school board in the district, suggested that Little Rock officials nominate candidates for the two at-large posts.

The Education Board also reviewed three options for creating nine school board election zones in the district. Those election zones will be reviewed by the district's Community Advisory Committee and presented to the public for reaction before ultimately going to Key and the Pulaski County Election Commission for approval. The new zones would be used for a November 2020 election of a new school board.

Sen. Joyce Elliott, D-Little Rock, questioned the reason for changing the number of school board election zones from seven to nine and said it appeared that the state is guarding against the election of a school board in which the majority of members would be black.