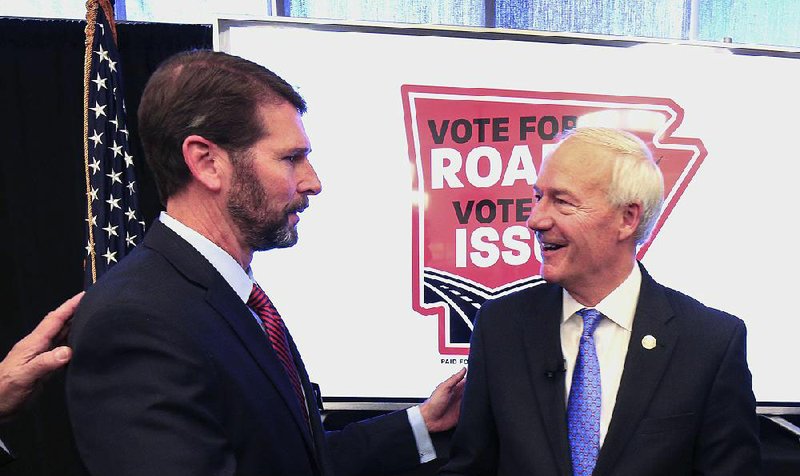 Transportation Department chief Scott Bennett (left) and Gov. Asa Hutchinson finish a news conference Friday at the Poultry Federation office in Little Rock that kicked off a campaign for a ballot amendment to raise money for state roads.

Gov. Asa Hutchinson on Friday helped open the campaign advocating for a proposed constitutional amendment on the 2020 general election ballot to make permanent the half-percent sales tax for highways.

"Welcome to the kickoff of what I believe is going to be the campaign for the most important issue on the ballot next year, Issue 1," the Republican governor told several dozen people representing groups that support the proposal. They were at a news conference at the Poultry Federation building in Little Rock.

"This is the campaign to continue funding for Arkansas highways, roads and bridges without raising taxes," Hutchinson said.

The half-percent sales tax was originally approved by voters in November 2012 and it was to expire after 10 years.

State officials project that in the future it will raise about $205 million a year for highways and about $43 million a year apiece for cities and counties.

Approval of the proposed amendment would provide funding for thousands of miles of interstate highways and farm-to-market roads, and money for repairing and replacing deteriorating bridges, Hutchinson said.

"Without passing Issue 1, the cities and counties will lose millions and millions of dollars that is currently in their road and street budget," he warned.

"Vote for Roads. Vote for Issue 1" is the name of the ballot committee promoting the proposal. The group held Friday's kickoff.

Its chairwoman is Shannon Newton, president of the Arkansas Trucking Association, according to its statement of organization filed with the Arkansas Ethics Commission on Oct. 25.

Hutchinson said a recent poll shows that "right now, 62% of all Arkansans either will vote for or probably vote for Issue 1."

"Now, that gives me confidence that we are on the right track and that the public understands the need here, but it also demonstrates the need for an effective campaign to pass Issue 1 because a 'probably vote for' is not 'a vote for' yet," he said.

The Gilmore Strategy Group conducted the poll Oct. 8-9 and the poll had a margin of error of 3.46 percentage points, the group's senior strategist, J.R. Davis, said after the news conference.

Hutchinson told reporters that "we know that this campaign will take at least $2.5 million, that's the sort of the minimum to run an effective issue campaign, and we are looking at the citizens that believe in roads to help fund that and to get it passed on the ballot."

Chad Geisler, who owns Emily's Flowers and Gifts in Lonoke, told reporters that he contributed $100 to the committee after his wife, Lorin Geisler, hit a pothole on a highway that gave her a flat tire while she was making a delivery earlier this week.

"We will be analyzing what resources will be necessary to win on the issue and which coalition partners are committed to support our effort," he said. "We will have a determination on our engagement shortly."

The half-percent sales tax increase approved by voters in 2012 led to a big jump in Arkansas' ranking in 2013.

As of Jan. 1, 2013, Arkansas' combined state and local sales tax rates ranked sixth in the nation at 8.61% before increasing to 9.18% as of July 1, 2013, to rank second, according to the tax foundation. It has ranked second or third ever since.

The 2020 ballot proposal, referred to voters by the Legislature, is the second prong of Hutchinson's $300 million highway plan.

The Legislature enacted the first prong of the plan earlier this year under Act 416.

In addition, Act 416 diverts casino tax revenue beyond $31.2 million each fiscal year to the state Department of Transportation and guarantees the department a minimum of $35 million a year from casino taxes, the state's restricted reserve fund and other sources.

Act 416 is projected by state officials to raise about $95 million more a year for the Transportation Department and about $13 million a year each for cities and counties.

Since 2013, 31 states and the District of Columbia have sought increases in fuel taxes, according to the National Conference of State Legislatures. But Missouri voters in 2018 blocked a planned increase in that state's motor fuel tax. 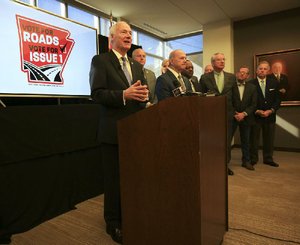 Photo by Staton Breidenthal
“This is the campaign to continue funding for Arkansas highways, roads and bridges without raising taxes,” Gov. Asa Hutchinson said Friday at a Little Rock event promoting the Issue 1 amendment.