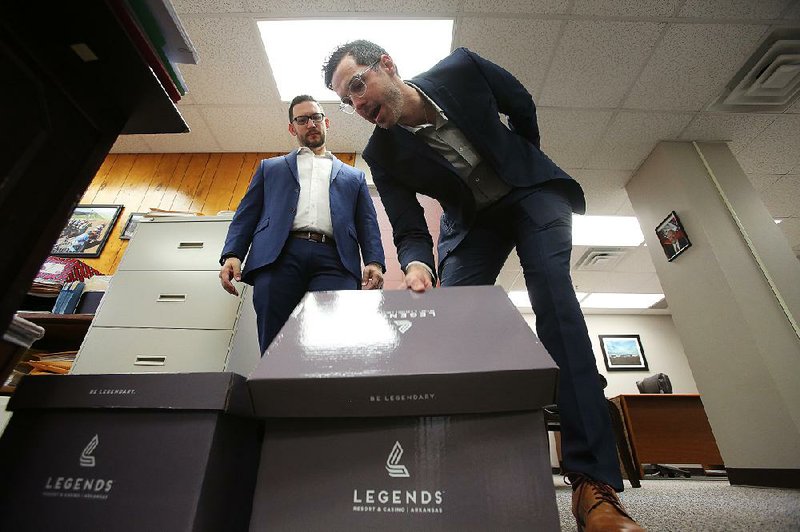 Cherokee Nation Businesses on Friday submitted an amended application to the state Racing Commission for a license to build and operate a casino at one of two sites in Pope County.

If approved, it would be the fourth and final casino in Arkansas allowed under a constitutional amendment that voters approved in November 2018.

"We are honored to have his full support, as well as that of the Pope County Quorum Court per the resolution and Economic Development Agreement executed back in August," he said in a written statement. "We are also thankful to have received a letter of support from Dover Mayor Roger Lee."

In addition to the Hob Nob Road location outside of Russellville, the amended application includes a site inside the city limits of Dover, Garrett said.

"We will continue to work closely with local elected officials to determine which is the best location for the project," he said in response to a written question about which site is the Cherokee Nation Businesses' top priority and which is second choice.

As to whether Cherokee Nation Businesses expects other applicants for the Pope County casino license, Garrett said the business is the only operator to fully meet the qualification requirements pursuant to Amendment 100 to the Arkansas Constitution.

"We remain highly optimistic and will follow the lead of the Arkansas State Racing Commission with respect to their process upon the closing of the application window on November 18," he said in his written statement.

Amendment 100 -- which allows a new casino in Pope and Jefferson counties and the expansion of gambling operations at the racetracks in Hot Springs and West Memphis -- requires that the new casinos have the endorsements of county officials. Amendment 100 also states that an endorsement issued by a mayor must be accompanied by a letter of support from the county judge or a resolution by the county Quorum Court.

In June, the commission granted a casino license to the Quapaw Nation to build a casino in Pine Bluff. The Saracen Casino Resort is a $350 million project that's now under construction. Gambling is already taking place in the city at the smaller Saracen Q Store and Casino Annex.

The Racing Commission decided last month to wait until lower court rulings are issued in two lawsuits before considering ruling on any application submitted for the Pope County casino license.

The lawsuits include one from Citizens for a Better Pope County that was tossed out by a circuit judge on Oct. 29 and another filed by Gulfside Casino Partnership of Mississippi against the state Racing Commission.

On Nov. 25, Pulaski County Circuit Judge Tim Fox is to hold a hearing on Gulfside's challenge of the rejection of its license application by the Racing Commission.

The second window for applications was opened after all five applicants for the Pope County casino -- Gulfside, Cherokee Nation Businesses of Oklahoma, Kehl Management, Warner Gaming of Nevada and Choctaw Nation Division of Commerce of Oklahoma -- were rejected by the Racing Commission in June because none contained endorsements from current officials.

Gulfside claims that its application met the constitutional requirements because, unlike the others, it included letters of endorsement from local officials issued right before those officials left office in December.

Hardin said Friday that he doesn't expect the Racing Commission to have much discussion during its next meeting, which is Thursday, about any applications submitted in the second window for applications.

He said he anticipates the commission formally considering any applications during its monthly meeting in December.

Cross announced Wednesday that he had written two letters of endorsement for Cherokee Nation Businesses -- one in support of a casino license for the Hob Nob Road site outside of Russellville and another for a potential site within the city limits of Dover. On top of that, the Dover mayor issued his own letter of support. All was in addition to the Quorum Court's backing.

Cross -- who promised in his campaign that he would not endorse a casino unless it was the will of the people -- said he issued the support letters "after an exhaustive review by legal counsel to the county in an effort to further mitigate litigation expenses to Pope County taxpayers."

On Aug. 13, the Pope County Quorum Court issued a resolution supporting Cherokee Nation Businesses for the license. On Oct. 28, the Quorum Court repealed a 2018 initiated county ordinance that required county officials to get permission from voters before they endorsed a casino candidate. No election was ever called.

The next day, Oct. 29, a circuit judge tossed out the lawsuit against the county that was filed by the anti-casino group Citizens for a Better Pope County, which contended that the Aug. 13 endorsement violated the ordinance because no election was held. The judge ruled that the ordinance was unconstitutional.

Cross said the second letter, for Dover, was necessary after Dover's mayor endorsed a Cherokee casino there.

Lee said in the letter that a casino would give Dover -- a city of about 1,400 people 10 miles north of Russellville -- the opportunity for "jobs, economic growth, and overall financial stability."

On Tuesday night, the Pope County Quorum Court's newly created planning board issued Cherokee Nation Businesses a construction and operation permit to build a casino resort north of Hob Nob Road just outside of Russellville. The permit essentially forces Russellville to honor the new permit if the land is annexed into the city in the future. 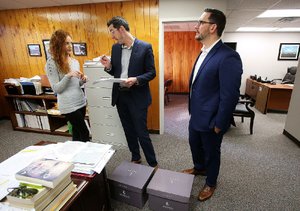 Photo by Thomas Metthe
Arkansas Racing Commission executive assistant Nikki Langston (left) goes over paperwork Friday with Ben Elder (center) and Matt Perrier of Cherokee Nation Businesses as they turn in their amended application for a license to operate a casino in Pope County.