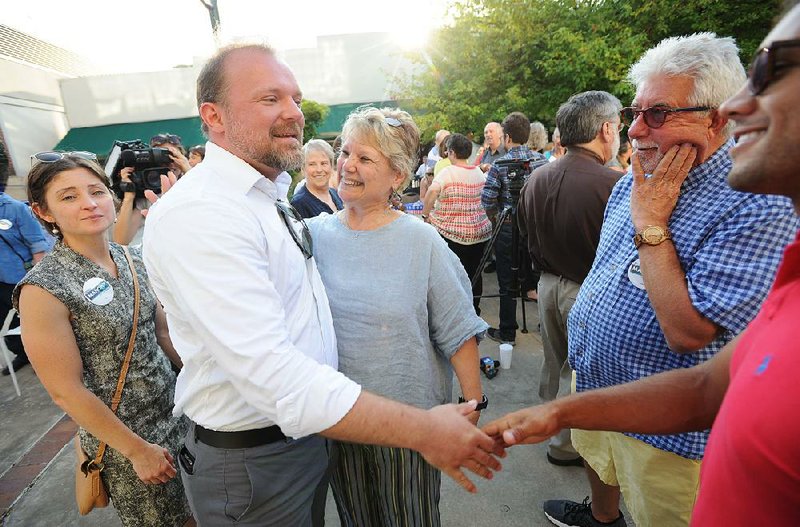 In this Friday, July 26, 2019 file photo Josh Mahony (left), former candidate for the Democratic nomination for U.S. Senate, shakes hands with supporters, alongside Denise Garner, State Representative for Arkansas House District 84, during a press conference at the Fayetteville Town Center in Fayetteville.

They soon discovered "significant vulnerabilities in Mahony's background" but sat on the information until Tuesday's candidate filing deadline had passed, according to a memo Wednesday from departing Cotton campaign manager Brian Colas that was addressed to "Senator Cotton's top supporters."

The first wave of attacks came "immediately after" the window for filing had closed, Colas noted.

Minutes after filing ended, the state Republican Party announced that it would file a complaint with the Federal Election Commission, accusing Mahony of lying on campaign-related federal paperwork.

The National Republican Senatorial Committee, meanwhile, questioned the challenger's work history, tweeting that Mahony had been "unable to remember the last time he was employed."

"Other damaging material that has not been made public" was in the hands of reporters, Colas wrote in the memo. The memo -- which urged Cotton backers to continue to support the campaign -- did not spell out what that material was.

The Republican bombardment was brief.

While warning that "liberal judges in Little Rock may twist the law" so that Democrats can "bring in a new -- and likely stronger -- candidate," the memo made clear that Mahony had been vanquished, and offered a blow-by-blow account of his demise.

"Our strategy was to hold our research, allow Mahony to gain momentum to prevent other candidates from entering the race, and work [with] the state Republican Party and the [National Republican Senatorial Committee] to release this information after it was too late for anyone else to enter the race," Colas wrote.

The absence of a major party candidate will free Cotton to campaign for vulnerable Republican candidates in Arkansas and nationwide, supporters say.

It also gives him greater flexibility in the realm of campaign finance.

The Cotton campaign reported cash on hand of more than $4.2 million as of Sept. 30.

"He can either save it for a future race or invest it in current races where there's a need. He has a history of doing that," Lamoureux said.

As to the aftermath of Mahony dropping out, state Democratic Party Chairman Michael John Gray said the party is studying its legal options.

Under Arkansas Code 7-7-106, a party can replace a candidate "running unopposed in a preferential primary" who dies or who "notifies the party that he or she will not accept the nomination due to a serious illness."

In a statement posted on social media Tuesday afternoon, Mahony cited "family health concerns" as the reason behind his decision.

Since then, party leaders say they've heard little else from Mahony, who appeared to have deleted his campaign Twitter and Facebook pages on Thursday afternoon.

Mahony has declined to answer questions from the Arkansas Democrat-Gazette about his withdrawal.

His former campaign manager, Keith Rosendahl, did not respond to phone calls and emails seeking comment Tuesday, Thursday or Friday.

Cotton declined to comment Saturday, according to a spokesman.

Mahony's letter of withdrawal, filed at the secretary of state's office on Thursday, made no mention of him -- or anyone else -- having a "serious illness."

If the Democrat or his allies decide to make medical claims in the future, it'll take more than a physician's note to settle the matter, state Republican Party Chairman Doyle Webb suggested Friday.

"If he alleges a serious illness, he'll have the opportunity to bring his doctor to court and testify on what that serious illness is," Webb told the Northwest Arkansas Political Animals Club on Friday. "The law is the law and we intend that the law be enforced and followed."

Gray, who also addressed the group, denied any mischief is afoot.

"The Democratic Party of Arkansas is not trying to illegally put somebody on the ballot," he said. Party officials are simply trying "to get our hands around all the facts" before drawing conclusions, he added.

Cotton will face opposition, with or without the Democrats.

A Libertarian, Ricky Dale Harrington Jr. of Pine Bluff, and an independent, Dan Whitfield of Bella Vista, have also filed for the seat. But historically, neither Libertarians nor independents draw significant votes.

Mahony, 39, entered the Senate race in May, just months after losing his bid to unseat U.S. Rep. Steve Womack, a Republican from Rogers, in the 3rd Congressional District.

But he struggled to build a campaign war chest, finishing the third quarter with just $25,833 cash on hand.

Republican opposition research files included a "certificate of indebtedness," dated May 15, 2018, from the state Department of Finance and Administration for $3,943.67 arising from unpaid Mahony state income taxes dating to Dec. 31, 2014.

The lien, issued in the midst of his 2018 congressional campaign, had not been touted by the Womack forces.

There was video, as well, from Mahony's Little Rock campaign kickoff earlier this year.

Filmed by a Republican activist hired by the Cotton campaign, it showed Mahony cracking jokes about his lack of paid employment and his reliance on the salary of his wife, a Walmart Inc. vice president.

Asked by the activist how he made his living, Mahony said he was a full-time candidate.

"Right now, it's good, too. My wife is, uh, works very hard and is, uh, keeps me from going broke, I suppose," he said on camera, pausing a few seconds to laugh. "I'm a kept man. How about that? Let's call it that way."

Once in the race, Mahony repeatedly missed deadlines for filing federally mandated financial-disclosure paperwork. The document, once submitted, was flawed; Mahony refiled it five times over the space of 38 days after errors and omissions were spotted.

Eventually, he would revise his 2018 House financial-disclosure form as well.

Federal records from both election cycles portrayed a candidate with no earned income and few personal assets, yet able to pour significant sums of money into his own campaigns.

Asked in September how long it had been since he'd held full-time, paid employment, Mahony told the Democrat-Gazette "I'm not certain. I'd have to go back and look. Frankly, I haven't put a lot of thought into that."

Mahony, who had sold his stake in EAM LLC for $23,616 more than a year before entering the race, said the false statements had been posted as the result of a "clerical error."

Though removed from the campaign website, Mahony's campaign-finance reports continued to list him as a "small business owner" employed by "EAM LLC."

Pointing to the entries -- and dozens of others like them -- the state Republican Party would later accuse Mahony of "willfully making false statements to a federal agency."

Party officials swiftly halted their attacks once the Democrat withdrew, promising to pray for the Mahony family members and wishing them a speedy recovery.

Though there were signs that the Mahony campaign was faltering, long before his withdrawal, Democratic officials didn't try to ease him out of the race.

"Josh announced early. He gained broad support from across the state amongst leaders in the Democratic Party," Gray said. "We are always working to ensure that there are candidates on the ballot. ... Other than Josh, no one showed any real interest in the Senate race."

When political parties fail to properly vet their candidates, it's a sign of weakness, Garner said.

"That's an extremely powerful and important position, not only for Arkansas but for the United States," he said. "Anybody who wants to run for that position has to understand that their history and past will be scrutinized. And it should be."

Lamoureux said he can remember when Republicans were the ones struggling to find viable candidates.

"The expense, the time, the energy. It's just difficult to recruit somebody to do that," he said. "Unless you feel like you have a chance of winning, most people can't justify taking on that task."

Even with Mahony out of the picture, the Cotton campaign is asking for additional donations.

There is still ad time to purchase, campaign materials to distribute and additional opposition research to complete, noted Colas, who was recently appointed to lead Cotton's leadership PAC. 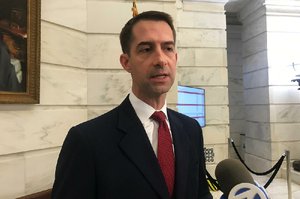 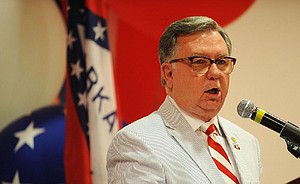 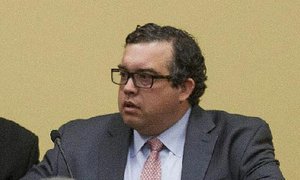