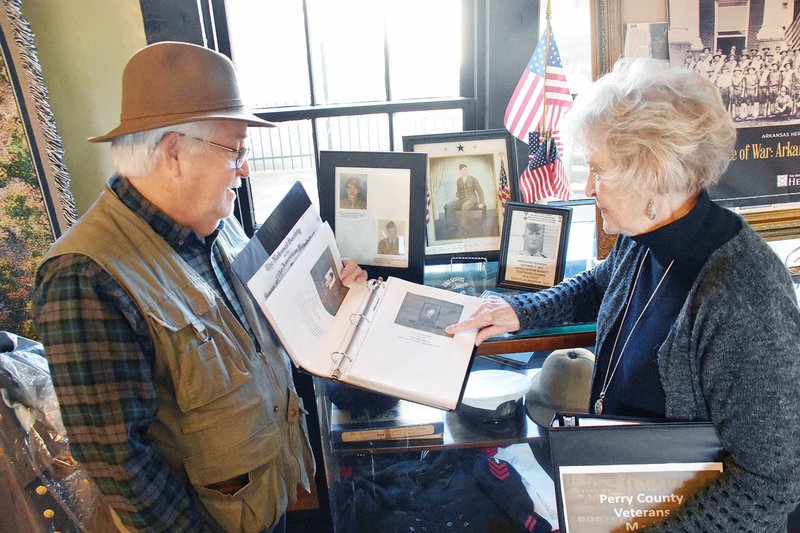 Mike Allison, president of the Perry County Historical Museum, and Beverly Doremus, board secretary, view photographs of Perry County veterans that are displayed in scrapbooks at the museum in Perryville. The museum is normally open from 10 a.m. to 2 p.m. every fourth Saturday of the month and will be open additional days in December, when the museum will host the exhibit Territorial Arkansas: The Wild Western Frontier, on loan from the Arkansas State Archives. ( Staci Vandagriff)

PERRYVILLE — The Perry County Historical Museum continues working toward its goal of being “a place where the past lives on.”

Mike Allison, a native of Perry County and president of the museum’s board of directors, said the museum “is dedicated to preserving the past to create a living memory for future generations.”

“We just want to keep this building open,” he said, adding that the museum is housed in what is known locally as the American Legion Hut, built in 1935 with the help of the Civilian Conservation Corps. In 2005, the Arkansas Chapter of the American Legion deeded the American Legion building to the Perry County Historical Museum, a 501(c)(3) nonprofit organization. The museum remains the central location for the chapter’s documents and collectibles, tracing military service back to World War I.

The museum, which is on the National Register of Historic Places, has an extended collection of military memorabilia but is seeking more.

“We are still in need of copies of photographs and military information of the Perry County men and women who served their country,” said Kathy Rankin, a longtime volunteer at the museum and secretary of its board of directors. “We are putting this information in scrapbooks.”

The museum will be open from 10 a.m. to 2 p.m. Saturday, and is open from 10 to 2 every fourth Saturday of the month. Rankin said members of the community are invited to bring their photos and other information, which can be scanned by a volunteer during that time.

Allison said the museum will host a special exhibit during December. The exhibit — Territorial Arkansas: The Wild Western Frontier — will be on loan from the Arkansas State Archives. Viewing hours will be 10 a.m. to 2 p.m. Dec. 5-6; 10 a.m. to 6 p.m. Dec. 7, which will coincide with Christmas activities in Perryville; and 10 a.m. to 2 p.m. Dec. 11-13. There is no admission charge, but donations are welcome.

Other collections at the museum include Perry County marriage records from 1882 to 2006, historical documents and memorabilia, photographs and prints, equipment, tools and household items, vintage clothing and furnishings, Indian artifacts and Civil War relics.

“The museum is totally run by volunteers,” Allison said. “We depend on grants, dues, donations and fundraisers to help keep it going.”

“We were able to partially pay for external repairs that were urgently needed. We replaced some of the windowsills, the back door and some of the timbers,” he said.

“We have to have these fundraisers in order to keep going.”

Rankin added, “If we don’t do anything else, we have to save this building. It is a treasure for our community.

“December is a busy month. Please take time to visit this special exhibit and share photographs and stories of Perry County.”