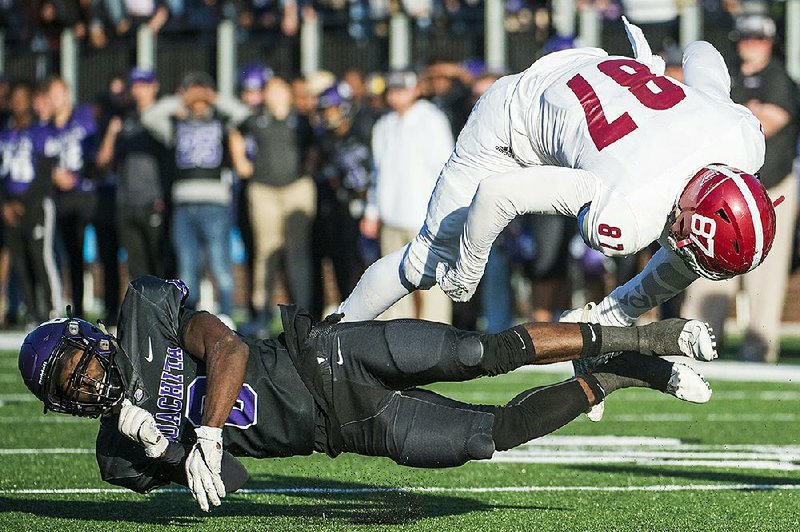 Henderson State tight end Ayden Shurley (right) is tripped up by Ouachita Baptist defensive back Keandre Evans during OBU’s victory in the 93rd Battle of the Ravine on Saturday in Arkadelphia. See more photos at arkansasonline.com/1117bravine. ( Jeff Gammons)

ARKADELPHIA -- Ouachita Baptist University used its final timeout to call two plays with the football sitting 1 yard from the Henderson State end zone as the clocked ticked down in the 93rd annual Battle of the Ravine.

OBU Coach Todd Knight said he got on the headset with offensive coordinator Jay Derby and told him he had no desire to run that second play.

Running back Brockton Brown got it done, finding a crease behind right guard Peyton Stafford on third and goal to tumble into end zone and secure a 24-21 victory over Henderson State University in front of an overflow crowd of 8,891 at Cliff Harris Stadium.

Gallery: Battle of the Ravine

Brown, a senior from Sheridan, said it was the perfect ending for the Tigers, who secured a third consecutive undisputed Great American Conference title and beat their rivals for the fourth consecutive time.

OBU (11-0 GAC) is expected to receive the No. 2 seed from Super Region 3 when the NCAA Division II selections are handed out today. A home game next Saturday is all but certain.

But the playoffs were not on Brown's mind when the offense huddled after OBU took its final timeout with 37 seconds to play.

The play was a bit of a blur, Brown said, especially after being stuffed by Henderson State's Antoine Roshell on the previous play.

"I don't know which gap I hit, but I was just looking for the open hole," he said. "At a moment like that, I had no time to think. I just had to push through, keep both hands on the ball and find the goal line."

Brown (16-63 rushing) said he heard the crowd get loud and saw his teammates celebrating.

"I just drew a blank," he said. "A little bit in shock. When I looked around, I saw every single fan in the stands, on the berm, the patio area, standing on their feet, jumping around and celebrating.

"That's when I realized we're undisputed back-to-back-to-back GAC champions. Our team did something that's never been done before."

The Reddies took a 14-0 lead on two 1-yard runs by Logan Moragne, and they were driving for a possible third score early in the second quarter when Ouachita senior defensive back Keandre Evans flipped the momentum with an interception of a Richard Stammetti pass at the OBU 22.

OBU did not score after the interception, but the Tigers got the ball back after forcing a Henderson punt and drove 78 yards in 11 plays to make it 14-7 at halftime.

"The biggest play to me," Henderson Coach Scott Maxfield said, "was the interception."

Evans said he positioned himself behind Henderson's Chase Lodre in an attempt to lure a throw from Stammetti, who ended the game completing 12 of 19 passes for 189 yards.

"I kinda knew it was coming because of the formation they lined up in," Evans said. "I had to put myself in the right spot, bait the quarterback to throw the ball. I was able to break on it and make a play."

Evans said the defense knew it had to do something to turn the tide.

"We weren't playing to the best of our ability," he said. "They came out with a lot of juice, a lot of energy. We had to pick it back up in the second half."

Henderson outgained Ouachita 192-69 before Ouachita's scoring drive to end the first half, a drive capped by a 25-yard pass from quarterback Brayden Brazeal to Allie Freeman, who finished with 7 catches for 74 yards, all in the first half.

Ouachita gradually took control in the second half, tying the game 14-14 on Brazeal's 6-yard run with 10:02 to play in the third quarter, and adding a 36-yard field goal by freshman Gabe Goodman to take a 17-14 lead with 11:40 to play in the game.

Ouachita was held to 3.6 yards per carry, but the Tigers managed to hold the ball and held the Reddies to 12 second-half plays midway through the fourth quarter.

The Tigers ended up running 73 plays to 47 for the Reddies, and rushed for 169 yards on 47 carries. They were in possession at their own 37 when senior Shun'cee Thomas fumbled and Henderson recovered at the OBU 41 with 5:41 left to play.

Henderson moved 41 yards in eight plays, scoring on a 10-yard run by Querale Hall with 1:44 to play.

"When they scored quickly, that was the best thing that could have happened," Knight said. "We had three timeouts. We always practice with a minute, 30 seconds. We were comfortable."

But with Freeman in and out with cramps, Brazeal had to look elsewhere, finding Justin Dean for 32 yards and Keemo McKnight for 20 to move OBU deep into Henderson State territory.

OBU faced first and goal at the 7 after Henderson was flagged for a personal foul for hitting McKnight out of bounds, and Brown came in to run the Tigers' Wildcat offense.

He picked up 6 yards on first down, but was stopped at the line of scrimmage on second down, forcing Ouachita to call its last timeout with 37 seconds to play.

Maxfield said he knew it would be tough to hold Ouachita out of the end zone.

"We just didn't make a play on that last drive," he said. "Somebody had to make a play for us. They made the plays, we didn't."

Nothing that happened before Brown's clinching touchdown was all that surprising, Knight said, after matching wits with Maxfield 15 times in the Battle of the Ravine.

Ouachita outgained Henderson 392-306, with 74 yards coming on the game-clinching drive. 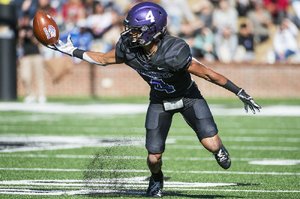 Photo by Jeff Gammons
Ouachita Baptist receiver Allie Freeman attempts to tip the ball to himself during Saturday’s game. The Tigers clinched the Great American Conference title with their victory. 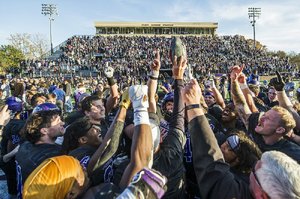 Photo by Jeff Gammons
Coach Todd Knight and Ouachita Baptist celebrate at midfield with the Great American Conference trophy after defeating Henderson State 24-21 on Saturday in the Battle of the Ravine at Cliff Harris Stadium in Arkadelphia. More photos are available at arkansasonline.com/1117bravine. 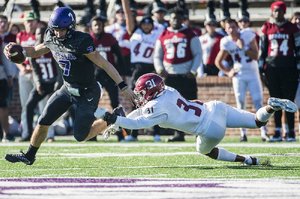 Ouachita Baptist quarterback Brayden Brazeal (left) avoids a sack attempt made by Henderson State defensive Mercado Anderson back during last year’s Battle of the Ravine. The GAC announced Friday it will delay the start of all sports practices until Aug. 31 and postpone any athletic competitions until Sept. 28. (Arkansas Democrat-Gazette file photo)

Print Headline: Two for one