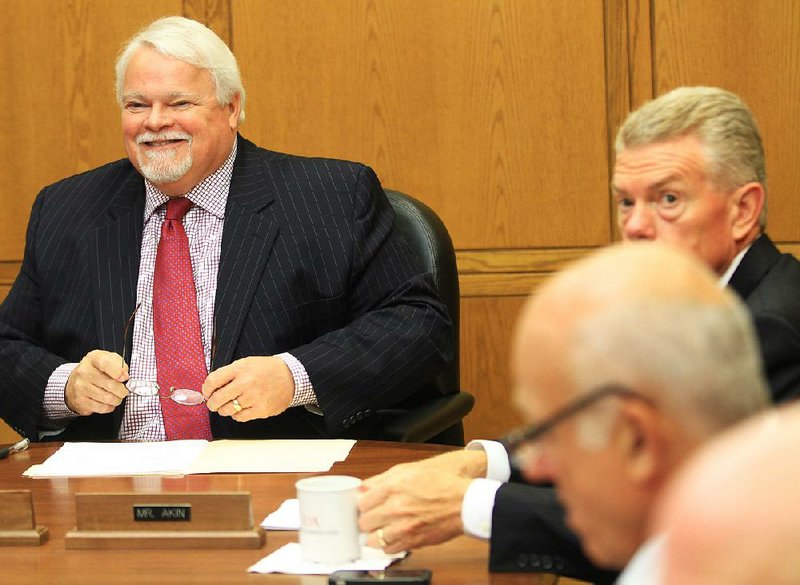 At a picnic one spring day in 1977, John Churchill told a Yale faculty member that he had gotten a job at Hendrix College and was moving back to Arkansas, where his infant son would grow up without an accent.

"The joke blew right past him, clear and clean," Churchill later told a crowd at Hendrix.

By 1977, Churchill had been a Rhodes Scholar, earning bachelor's and master's degrees from the University of Oxford and was finishing up his dissertation for a Ph.D. from Yale University.

He spent the next 24 years at Hendrix, where he twice served as interim president, and his pickled okra won a blue ribbon at the Faulkner County Fair.

Then for 15 years he was the chief executive officer of Phi Beta Kappa, the nation's oldest academic honor society, in Washington, D.C.

On Saturday, Churchill, 70, died peacefully in his sleep at a hospital in Nashville, Tenn., 42 miles east of his home in Dickson, Tenn., where he moved after retiring in 2016. He had been battling a septic infection, according to the family.

Born April 1, 1949, John Hugh Churchill spent the first few years of his life in Hector, where his father, Olen R. Churchill, was superintendent of schools.

The family moved to Little Rock, where John Churchill took an interest in the girl next door, Jean Hill. They began dating at the age of 16, later married, had three kids and remained together the rest of his life.

Some of their fondest memories were living in a cottage in Kirtlington, about 12 miles north of Oxford, while John was studying in England.

Churchill graduated from Little Rock's Hall High School before attending Southwestern (now Rhodes College) at Memphis, where he was captain of the football team, conference champion at throwing the discus, and a member of Phi Beta Kappa.

For 17 of those 24 years at Hendrix, Churchill served as vice president for academic affairs and dean of the college. He had also been dean of students at Hendrix and taught philosophy throughout his time there.

Ann Die Hasselmo, who was president of Hendrix for nine years, said Churchill was "a prince of a man," brilliant, ethical and humane.

"There aren't many people about whom I can say this, there is nothing laudatory or flattering that you can say about John Churchill that would not be true," Hasselmo said. "He was a remarkable, an amazing human being. Those of us who knew John and Jean mourn with the family and count ourselves fortunate to have walked a bit down the path with him."

W. Ellis Arnold III, senior executive vice president and general counsel at Hendrix College, said he had the good fortune to have been one of Churchill's students the first year he taught at Hendrix. Later, they were colleagues in the college's administration.

"Throughout that entire time and beyond, John's joy for life and family along with his passion for the liberal arts were contagious and inspiring," Arnold said. "His smile was infectious, his wit was sharp but never piercing and his enthusiasm for storytelling was captivating. I have never known a more beloved and admired member of the Hendrix community. He is truly a Hendrix legend."

"We'd go out in blistering cold wrapped in blankets with biscuits and Wolf Brand chili," Will Churchill said.

Hugh Churchill of Fayetteville, the youngest Churchill child, said he remembers going on neighborhood walks at night with his father.

"He could lecture extemporaneously on hundreds of topics," Hugh Churchill said. "I could ask him about anything in the world, and in the course of our 45-minute or hourlong walk tell me everything I needed to know about it."

Blake Rutherford of Washington, D.C., said his uncle John Churchill was "a man of towering intellect and insatiable curiosity."

"In a world where such talents could have led him to a life of intense introspection, Uncle John was the opposite: gregarious, engaging, and enthusiastic about everything, it seemed -- his work, Hendrix College, his family and his many, many hobbies," Rutherford said. "But most of all, he was kind, always."

Will Churchill said his father loved absurdist humor and was a fan of Monty Python. A cat skull at his father's house, painted red, had an odd resemblance to a Razorback Hog Hat.

"That's the kind of thing that dad did all the time," his eldest son said.

The Churchill children once went on a campaign to get a pet pig. John Churchill consulted a Japanese zen master to make sure a pig would be compatible with his zen rock garden.

While still pondering the pig, John Churchill returned from a trip to find that the children had acquired a pot-bellied pig.

"It was complete sabotage," Will Churchill said.

But John Churchill came to love the pig. They would spend hours on the back deck, Churchill reading and the pig getting scratched behind the ears.