‘Concealed Carrie’ has been hiding in plain sight 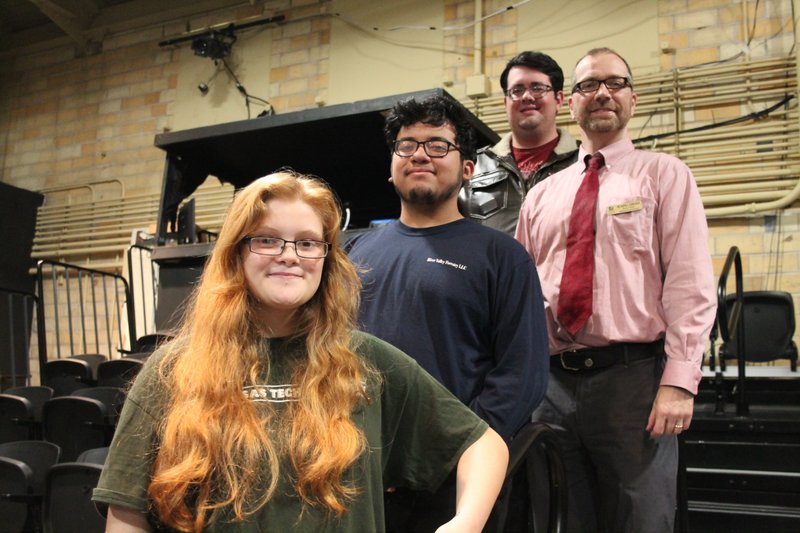 RUSSELLVILLE — There is a secret hero in the hills of Arkansas, and she has been thwarting villains like the Litterbug, the Jaywalker, the Diabolical Schoolboy, the Naturist and others since 2014.

By day she is Cathy Lee Linker, an unassuming employee at a wig and makeup store who is raising her teenage niece in sleepy Hanging Basket. But when evil is afoot, she transforms into Concealed Carrie: Diamond State Crimefighter.

Using her considerable skills with makeup and costumes to hide her true identity, Carrie roots out evildoers and scofflaws with cunning and subterfuge, like the time she dressed as a raccoon to infiltrate an army of the beasts that had been made crazy by pollution in their water supply, or when she took on the Slow Leak, who was revealing secrets online about Hanging Basket citizens.

And then there's her complicated relationship with her greatest nemesis, the mysterious Businessman.

Even though she is a super crime fighter, Concealed Carrie won't be showing up at the multiplex alongside the Avengers any time soon nor can her adventures be found in a comic book.

She exists in the theater of the mind as the star of a radio program produced by the Arkansas Radio Theatre in association with the Arkansas Tech University department of communication and journalism. It airs on the college's radio stations, KXRJ-FM, 91.9 and can also be heard online.

Carrie was created by David Eshelman, professor of communication and theatre director at Arkansas Tech. He has also written the bulk of the 18 episodes featuring the plucky crime fighter and a cast of Hanging Basket regulars including Carrie's good-for-nothing boyfriend, Boyce, and her niece, Britney.

Each episode is a bit under 30 minutes and is voiced by student actors. Eshelman's writing often spoofs pop culture and small-town Arkansas life and sometimes touches on topical subjects like fracking, but it's all done with a clever, good-natured charm that favors the eccentric.

And while Eshelman calls Carrie a "do-gooder," she is also fallible. Episode 17, when a newcomer opens a yoga studio in Hanging Basket, finds our hero assuming the worst when confronted by someone simply outside of the norm.

Threads of earlier narratives continue through the series — including one about the hands of statues around town being chopped off — and each story is presented by a narrator. Actors voice most of their own sound effects — "Splat!" "Creeeeeek!" — which adds to the homey appeal. 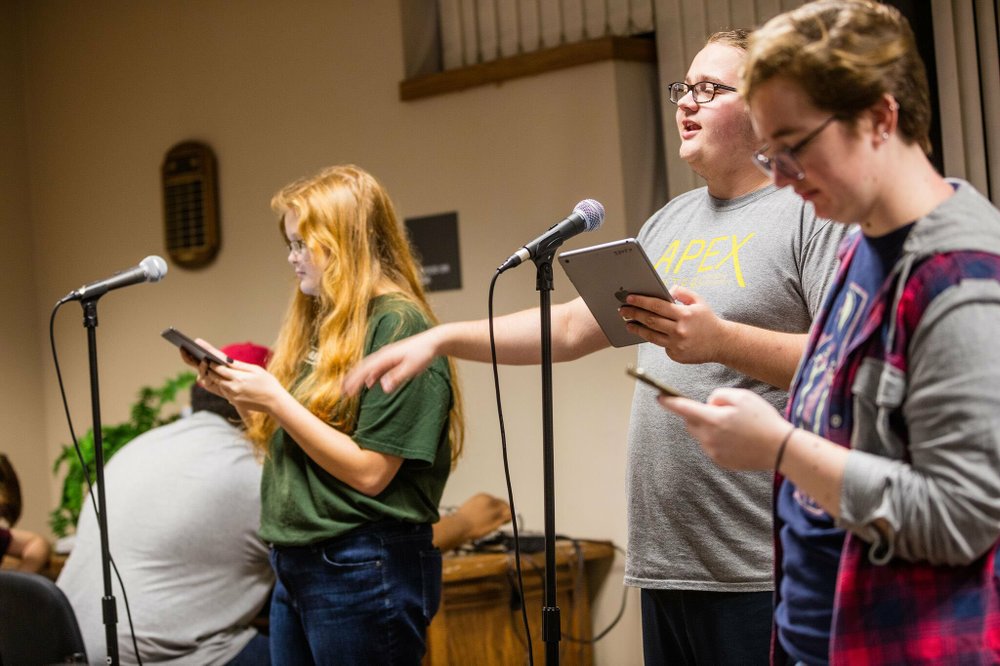 Eshelman is in the green room of the Techionery Theatre at ATU on a gorgeous fall afternoon earlier this month. He is joined by 19-year-old sophomore Beka Wright from DeWitt, who plays Concealed Carrie in three forthcoming episodes, and 19-year-old sophomore Brady Williams from Fayetteville, who has written Episode 21, Concealed Carrie and the Parlous Pop Company, which will be recorded later this evening.

The inspiration for the Concealed Carrie series came from comic books, especially the Silver Age titles from the mid-'50s to the early '70s, Eshelman says.

"I was reading a lot of those, and that's how I got the idea of it coming in installments and mixing narration with dialogue."

Eshelman, a playwright who also teaches writing for performance, is originally from Buffalo, N.Y., and came to Arkansas Tech in 2006. He tries to instill in his students a sense of place with Concealed Carrie and to show them that there are stories in their own backyard worth exploring.

"I wanted them to know that Arkansas is a place you can write about," he says.

And Hanging Basket, of course, is a fictionalized version of Russellville.

Concealed Carrie is also a show where students can hone their writing skills on an existing series, which could be what they end up doing if they ever write for television programs, Eshelman says.

Williams is a print journalism major and says that his episode, in which citizens of Hanging Basket are seduced by the addictive qualities of a new soda pop — "Broderick's Amazing Delicious Soda! ... twice the carbohydrates, twice the caffeine, twice the taste and twice the fun" — is a satire on capitalism.

"When I was writing it, I started listening to [early] radio dramas," he says. "I listened to some Orson Welles plays, and that's how I got my narrator's voice down. It was a lot of fun. I wrote furiously for like two weeks."

He put the script aside over summer break but picked it back up when he returned to school and Eshelman told him he wanted to produce it.

Wright is a sociology major who was in the radio theatre's production of As You Like It in 2018. She tagged along with a friend to a Concealed Carrie audition and walked away with the lead role.

"I have almost no experiences in acting," she says. "Last year's radio play was the first I'd ever done, but it's been real exciting so far."

Eshelman says he knew Wright would be a good Carrie when he saw her develop an old man's voice in As You Like It.

To play Concealed Carrie, who becomes different characters as she disguises herself, Wright adopts a range of voices.

"It's changing your voice to fit the different characters she plays," she says. "I'm taking these different identities she has, like she is a community college girl who I basically see as a Valley girl who wears shiny lip gloss. Then she's an actress in an infomercial, so that's a different voice."

Wright is the fourth person to play Carrie, and along with Concealed Carrie and the Parlous Pop Company, she will play the character in The Gold Diggers of 1933 and Trashheapa Garbagé, which are also being recorded this month.

Boyce is a bit of a lunkhead who "lets me tap into a certain masculine side that I don't normally let myself get into," Zarate says. "My voice is naturally high-pitched, so when I play him I had to change from like 'It's me, Abraham,' to [lowering voice] 'Hi, I'm Boyce.'"

Meemaw's tone comes while Zarate pinches his nose and speaks in a higher register.

The broadcasts are recorded rather than presented live, Eshelman says, with the actors reading from their scripts. 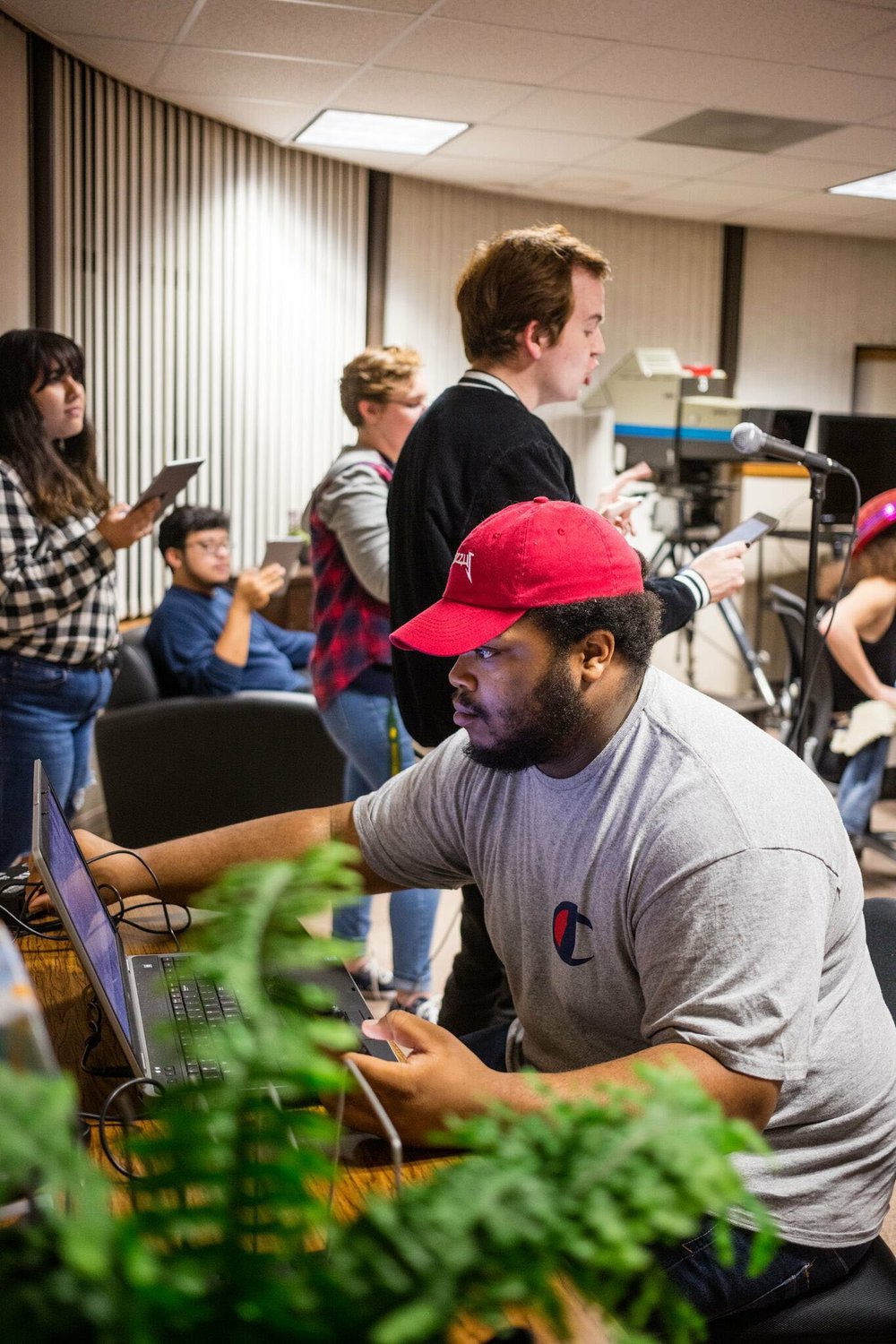 Each episode is recorded twice, with the first take being a sort of run-through. During the second recording, Eshelman will give direction to the actors, having them repeat lines or scenes if needed.

Afterward, he and his graduate assistant will edit the programs.

Eshelman started the Arkansas Radio Theatre in 2007. Besides Concealed Carrie and As You Like It, the theatre has produced more than 70 shows, including works based on classic literature such as its debut production Sherlock Holmes and the Engineer's Thumb, and Balzac's The Blood Soaked Shoe, Othello and Virginia Woolf's Blue and Green, along with original pieces by students and Arkansas writers.

The trio of recently recorded Concealed Carrie episodes will air on KXRJ in the spring and can also be heard on the radio theatre's website, which means that Eshelman will have to get busy editing.

"I'm going to have to get these three episodes done real quick over winter break so they will be edited and ready to go," he says.