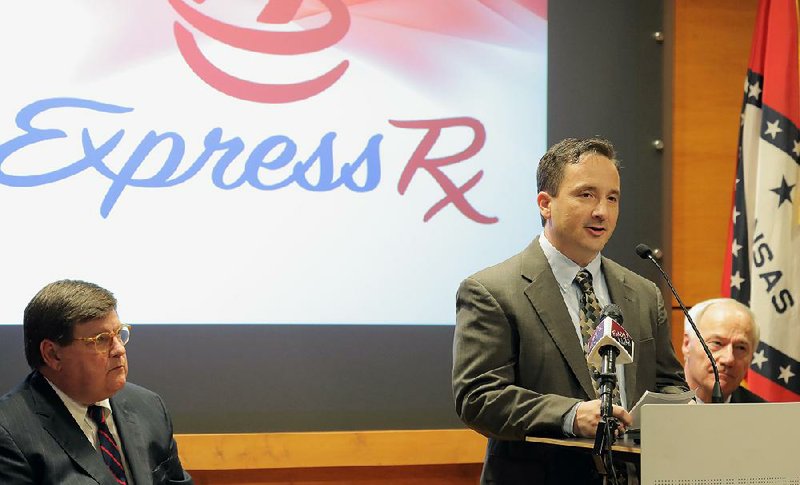 Galen Perkins, CEO of Express RX, talks about the company’s plans Monday at a news conference held at the Little Rock Regional Chamber of Commerce and attended by officials including chamber Chairman Kevin Crass (left) and Gov. Asa Hutchinson.

Express Rx announced Monday it will expand its operations in Little Rock and formally establish its corporate headquarters in the city. The expansion will add 24 jobs over the next three years with a payroll ranging from $1.5 million to $2 million, company officials said.

Recruiting companies that pay well is important to growth, the governor said. "As we create jobs in Arkansas, we're able to focus on the higher-paying jobs that we want to bring" to the state, Hutchinson said.

Express Rx's headquarters will be located at 1800 Riverfront Drive, with personnel added gradually over the next three years, Perkins said.

Scott noted that Little Rock will profit from the company's continued growth.

The company did not give salary specifics, but Perkins estimated that about half of the 24 jobs at headquarters will have six-figure salaries. If the company hires 24 employees at headquarters and reaches the high end of estimated payroll at $2 million, the average annual salary per employee would be more than $83,000.

Express Rx is a retail pharmaceutical company that offers compounding services, fills subscriptions for customers and sells general goods in stores that are reminiscent of mom-and-pop drugstore operations. The company started with a single store in Miami, Okla., in 2013.

"We now have 18 stores across eight states with plans for growth," Perkins said. "It was clear we needed a new corporate headquarters, and we couldn't have picked a better spot than Little Rock."

Perkins said local and state officials provided a welcoming environment "that goes along with our plans to produce a friendly environment for our workforce and our patients." That greeting eased the decision to locate in Little Rock, he said.

In addition, he noted that area officials also understood how to support a business that operates in rural locations.

"We primarily focus on rural and underserved areas," Perkins added. "The mindset of taking care of that population is here."

Financial incentives were another important factor, according to Perkins. Express Rx will capitalize on incentives that include a payroll rebate based on a company's annual payroll for new, full-time and permanent employees. It also will gain sales and use tax refunds on the purchase of building materials, machinery and equipment.

In 2016, the first Little Rock store was built with seed capital provided by strategic partner Franklin McLarty, whose firm invests in small businesses. McLarty is the son of Mack McLarty, a Little Rock businessman who was chief of staff to then-President Bill Clinton. Franklin McLarty will continue to be an adviser and principal for Express Rx, company officials said.

In addition to two stores in Little Rock, Express Rx has pharmacies in Cabot and Sherwood. Express Rx added pharmacies in Missouri and Oklahoma, and last month it joined with MHR Fund Management to purchase 10 Fred's Pharmacies in Alabama, Kentucky, Louisiana, Mississippi and Tennessee.

Chief Financial Officer John Trainor Namir said the company's revenues are about $55 million and should double over the next year through acquisitions. MHR also will continue to be involved in future transactions, according to Namir.

"We're got a number of folks that we're actively talking to today in all the states that we're in," he said. "Over the course of the next year or so, we expect to have another 20 stores added through acquisitions."

Express Rx has about 150 employees spread across its eight-state region. The retail stores provide full-service pharmaceutical care and also deliver to customers' homes.

"We operate in mainly rural areas and believe in delivering personal service to customers," Namir said.