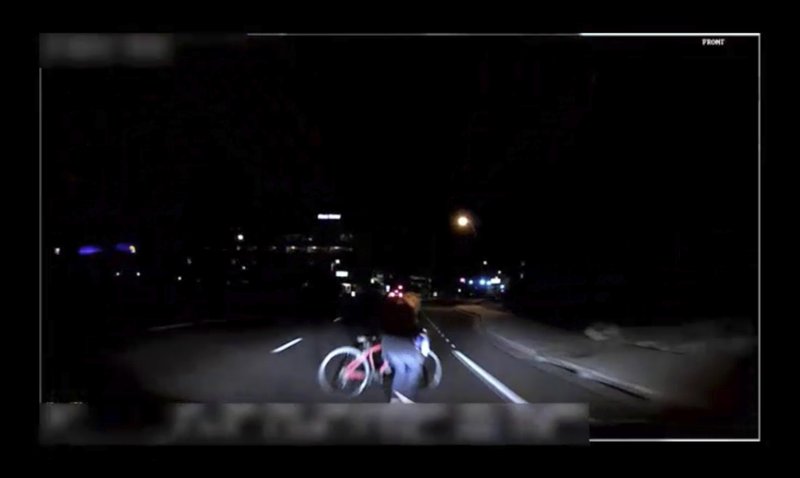 This file image made from video March 18, 2018, of a mounted camera provided by the Tempe Police Department shows an exterior view moments before an Uber SUV hit a woman in Tempe, Ariz. The chairman of the National Transportation Safety Board says Uber had an ineffective safety culture when one of its autonomous test vehicles ran down and killed a pedestrian last year in Tempe, Arizona. (Tempe Police Department via AP, File)

The National Transportation Safety Board on Tuesday condemned the lack of state and federal regulation for testing autonomous vehicles before finding that a distracted human safety driver was the main cause of a fatal 2018 Arizona crash involving an Uber vehicle.

The board criticized the National Highway Traffic Safety Administration, the government's road safety agency, for failing to take a leadership role in regulating tests on public roads. But it also said states need to adopt regulations of their own.

The agency has issued voluntary guidelines including safety assessment reports from autonomous vehicle companies, but only 16 have filed such reports, the NTSB said. Yet there are 62 companies with permits to do testing in California. The agency has instead avoided regulations in favor of allowing the technology to move forward because it has tremendous life-saving potential.

NTSB staffers told the board that the traffic safety agency has no mechanism to evaluate the companies' safety reports, and since they aren't mandatory, few are submitting them.

At a meeting Tuesday the board recommended that the agency require companies to turn in the reports and set up a process for evaluating them. The board said the agency should make sure the companies have proper safeguards in place. Those include making sure that companies show that they are monitoring vehicle operators to ensure they are paying attention during the tests, the NTSB said.

In a statement, the agency said it welcomes the NTSB report "and will carefully review it and accompanying recommendations."

The agency said its investigation into the Tempe crash, which killed a pedestrian, is ongoing and a report will be made public when it's finished.

The NTSB also recommended that states, including Arizona, require autonomous-vehicle companies to turn in applications to test vehicles on public roads that at a minimum require a plan to manage risk and operator inattentiveness. The plans also should set countermeasures to prevent crashes or mitigate their severity.

NTSB Chairman Robert Sumwalt said during the hearing that Uber had an ineffective safety culture before the March 2018 crash on a darkened street in Tempe that killed Elaine Herzberg, 49.

Sumwalt said Uber didn't continually monitor its operations and it had deactivated its Volvo SUV's automatic emergency braking system. Uber's own system also didn't have the ability to brake automatically, relying on a human backup driver to do the braking.

He said all companies that test autonomous vehicles on public roads need to study the crash to prevent future accidents.

The Uber system detected Herzberg 5.6 seconds before the crash. But it failed to determine whether she was a bicyclist, pedestrian or unknown object, or that she was headed into the vehicle's path, the NTSB said. The system also did not include a provision for detecting jaywalking pedestrians, the agency said.

Instead, Uber relied on a human operator to pay attention and stop the vehicle to avoid a crash. But the company's driver was streaming a television show on a cellphone and looking down just before the crash. The NTSB said Uber had cameras monitoring the drivers, but it didn't do spot checks to make sure they were paying attention.

It said Uber cooperated in the investigation, listened to criticism and has made many safety improvements since the crash, including activating the braking systems, better training of human backup drivers, adding a second driver and hiring a safety director.

Herzberg was impaired by methamphetamines at the time of the crash and crossed a road in the dark away from an intersection, according to the NTSB staff.