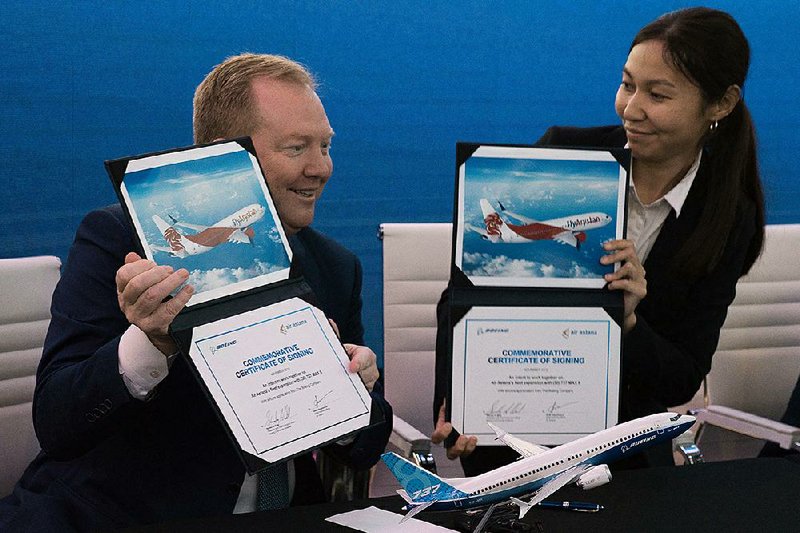 Boeing secured orders for 50 737 Max narrow-body planes, padding its tally at the Dubai Airshow while building momentum for the grounded aircraft ahead of its potential return to the skies in January.

Kazakhstan's Air Astana signed a letter of intent for 30 jets, Boeing announced Tuesday, while an undisclosed customer bought 20, according to a person familiar with the matter. The orders come after SunExpress of Turkey purchased 10 planes, giving a total value of about $7.5 billion at list prices.

"This was a tendered competition we fought hard for and won," Stan Deal, the new head of Boeing's jetliner business, said of the Air Astana order. The sale will be especially welcome since the Central Asian carrier is an established customer for Airbus SE's rival A320neo.

Business for the Max has been sparse since the latest version of the storied 737 series was idled in March after two deadly crashes in five months. The A320neo, meanwhile, won a $14 billion, 120-plane order from Air Arabia at the Dubai show on Monday, followed by a $1.3 billion acquisition of 12 Neos by U.K. discounter EasyJet PLC.

Indian low-cost carrier SpiceJet also told Bloomberg on Monday that it was discussing an order for an undisclosed number of Max jets, though the trickle of orders can't disguise the impact of the crisis surrounding the plane.

Boeing is working with regulators to certify a fix to flight-automation software that was involved in both disasters.

In the meantime, customers for the troubled model are generally hedging their bets by declining to commit to firm orders. That was true of a blockbuster $24 billion deal for 200 planes announced by International Airlines Group at the Paris Air Show in June.

The British Airways parent affirmed deployment plans for the aircraft at an investor day this month while excluding them from a tally of future orders since deliveries aren't due until 2023.

The Kazakh deal is particularly positive for the Max since Air Astana has been building its short-haul fleet around the A320neo. The company intends to take the Boeing planes from 2021 and deploy them at its FlyArystan low-cost unit. It may still add Airbus jets after studying the A321XLR for its longest routes.

Air Astana's chief planning officer, Alma Aliguzhinova, said FlyArystan expects to start operations of the first 737 Max in late 2021, giving the company 18 months to observe its operations from when Boeing hopes to have the jet back in service globally.

"What we see is that, as I said, we have time before we start operations," she said. "So we are confident that this will be addressed by that time... We are confident in Boeing."

Away from the Max-A320 face-off, Airbus has dominated in Dubai, led by an Emirates airline order for 50 A350 wide-body planes valued at $16 billion.

The deal includes 20 more planes than an initial agreement in February, though the Dubai airline, the world's largest on long-haul routes, failed to sign off on 40 A330neos included in the earlier accord.

At the same time, Boeing failed to progress a sale of 40 787 Dreamliners to Emirates, and that sale now appears to be in the balance. The Persian Gulf giant also has 150 orders for the 777X wide-body, delays to which have invoked the ire of its president, Tim Clark.

Airbus' smallest model, the A220, also secured an eight-plane order from Air Senegal. While small, the deal helps top up the backlog for the former CSeries jet that the European company acquired from Bombardier Inc. Saudi discount carrier Flynas also firmed up the purchase of 10 A321XLRs that had been flagged earlier.

Boeing wrapped up its show with a three-plane order for the 787-9 variant of the Dreamliner from Ghana. The planes will be used by a new carrier that's to commence flights in the first quarter of next year. The deal adds to a two-plane 787 order from Biman Bangladesh Airlines announced Sunday.

Airbus capped off the day with an announcement that GE Capital Aviation Services, a commercial aircraft leasing arm of General Electric, had signed an order for 12 wide-body A330neos and 13 new single-aisle A321XLRs.

Information for this article was contributed by Siddharth Philip and Layan Odeh of Bloomberg News and by Aya Batrawy of The Associated Press.